Skywatch Friday: You CAN Take the Sky from Me 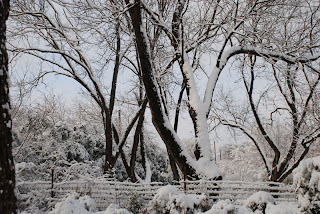 A view of sky and snow from bygone days
The theme song for my all-time favorite television show, Firefly, was written by the writer/director/producer Joss Whedon and performed on the show by Sunny Rhodes.  I just love it--an anthem to the kind of independence and freedom that attracted fans from both ends of the political spectrum:

Take my love, take my land,
Take me where I cannot stand;
I don't care, I'm still free,
You can't take the sky from me!

But those of us who don't have Firefly-class transport ships to tootle around space in, and who've moved to the 'burbs in search of peace and quiet, may be in for a rude surprise.

New neighbors, it seems, absent zoning codes that prohibit them, can build 6.5 foot privacy fences and block what was once a rather nice view.

Now, I've only spoken to this woman once, so I don't much know her; but then, I don't really care to, either.  She aimed the arse-end of the fence at me (metal support posts on my side), and put up a cheesy plastic garden shed that shows about three feet above it.  We then hired her fence guy (bad decision) to build a Craftsman style short picket fence and gate to open up our side yard (despite our snarkyness, we do try to make the best of things).  It looked okay, but was badly designed; we should have insisted on cedar 4x4s instead of boxed in metal posts, and they didn't finish the top, so that the nubs of the posts showed.  Our own contractor's fence guy has finished it up so it looks right, but our solution to a problem caused by someone else will end up costing us as much as a space-shuttle toilet seat.

I used to enjoy looking out the window in the breakfast room as I poured my coffee, at the twin-gabled house next door, which bears a passing resemblance to Kelmscott Manor. The air flow between the houses helped to mitigate the heat of a summer afternoon, and kept everyone from broiling.  Now, however, it's up to me to construct the view from that same window. There will be no more fairy-tale winter views of the Tudor; instead, we'll see (if it ever does snow again) something entirely different, and it will depend on how well we furnish the side yard. The fence will become the backdrop before which we stage our own tableau. 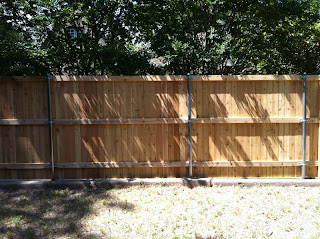 It's much the same in the back yard, where I'll no longer be able to shoot unobstructed sky shots, like the one that opens this post. There is now a sense of increased privacy that's only enhanced by the newly painted garage, and the promise of uncluttering around the yard. But the trees below are the same ones that appear, covered with snow, in the opening photo. 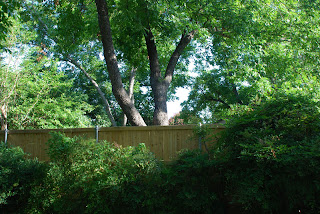 This doesn't do much to enhance the sense that we belong to any kind of a community around here, stuck as we are now between the isolating fence and the "We Don't Call 911" and Confederate flags  on the other side.

On the other hand, the compliments on the house we've received from other local folks walking by have been encouraging, and we've met some interesting new people who stop to chat about their experiences fixing up their old relics.  This is, after all, an historic district, and its existence is why we're here in the first place.

After all the work is finished on the house, and the weather has cooled down enough to sit on the front porch (having dutifully sprayed ourselves down with insect repellent), we're looking forward to further community engagements. Perhaps home improvement might make us a little less hermit-like and more neighborly ourselves.
Posted by Owlfarmer at 8:01 AM

Lovely photo of the snow, nice to watch the seasons change and gardens develop. Have a great weekend full of photo opportunities.

That's sad about the neighbor's huge fence blocking your lovely view. It sounds like you made the best of it...lemonade from lemons.

There is a lot to be said for front porch sitting. The chance meeting of those walking by is often entertaining and/or informative.
I grew up in the neighborhood where I still live.I once thought I had seen it all in the nearly half century relationship I have with this house...I was recently proved wrong.
The "new" neighbor on the South side trotted out to inform me, while I watered the grass on the parkway that she was going to do such a nice thing for me...run sprinkler pipes into the parkway on my side as well as hers!
I quickly said that ,no,she should not do that the city would not permit hard plumbing across property lines.
She said "Oh hon,will never know"
I added in a firmer tone"Someday they will,when the house changes hands. So no,please do not run anything across the property line"
She tells me she loves her house and will NEVER move. I had to tell her that she is the 16th resident I have known to live there so one never says never.
She has been very cool toward me since and I am OK with that.
Just think of your new fence as a canvas to design the way you like!