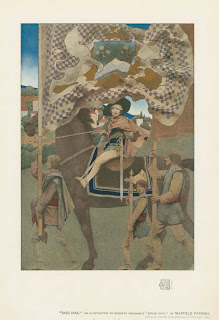 We've begun to put the interior of the house back together as things get finished off one by one. On Saturday, as I was replacing some family photos on one of the shelves flanking the fireplace, I noticed a book I hadn't realized that I had.  During the living room paint job, the books remained on these shelves (I'm going to paint them later), so I hadn't had to move them--else I'd have noticed the book a couple of months ago.  I have a rather large collection of books for various ages of children, most of which have been passed down through generations of my family.*  But I still buy books I don't already have, by authors I have loved well, and especially if they're artfully illustrated.

Rather recently, I think (although with the current state of my memory, who knows), I happened on a Ten Speed Press reprint of Kenneth Grahame's Dream Days, illustrated by Maxfield Parrish.  It's a lovely facsimile edition, complete with the black and white plates of the original facing the first page of each story.  Most folks are only familiar with The Wind in the Willows (and probably because of the Disney film rather than the book itself), but Dream Days is the collection of short stories that contains the inspiration for another Disney film, "The Reluctant Dragon."

The astonishing thing about this little book, and its predecessor, The Golden Age (also "profusely" illustrated by Parrish), is the view of children as curious, inventive, literate, engaging people, bent on building their own little utopias within their own landscapes.  Grahame, who appears to have been just such a child, reminds me of J. M. Barrie, whose Peter and Wendy is just about the wittiest book I've ever read.  Both Barrie and Grahame seem to be writing both for the children themselves, and for the parents who would be reading the stories to them.  We see this same phenomenon today in clever animated features clearly meant to engage different audiences (Rango comes immediately to mind), but the "literature" I see on the shelves for kids today seems not to be nearly as well tuned.  Mind you, it's been quite a while since I actually bought a book for a child that wasn't a copy of an old childhood favorite, but their section of the bookshops is so over-stuffed with toys, games, movie tie-ins, and other trumpery that whenever I do want to buy a book-gift for a new baby, I have to search through the Times children's book reviews and order online to save myself the angst of wading through the mire to look for a new title.

But yesterday, I spent a little time in the kids' portion of Half Price Books, looking for a copy of The Golden Age, to no avail.  I did see a few copies of The Wind in the Willows (most had the Disney art on the cover), but nothing else, so I went to the Nostalgia section to see what might be there.  I yearned for two Tom Swift books, but had already latched onto a tenth-edition copy of  Tom Brown's School Days, and a My Book House collection of Tales Told in Holland--both for the quality of the illustrations and prose.  Once again, early twentieth-century children were clearly exposed to far more literate and instructive reading material than their early twenty-first-century counterparts are.

At some point I'll have to post a rant about this condition on The Owl of Athena, and talk about other of  Grahame's books on Owl's Cabinet. But for now, the fact that the children he writes about would undoubtedly fit in quite well with those who populate More News From Nowhere makes an account of this week's literary adventures fit best on The Farm.

*Owl's Cabinet of Wonders posts on some of these: The Peter Patter Book, October 2008, and Fiddling Away the Summer, August 2008.

Image credit: The Maxfield Parrish illustration for "Dies Irae," 1906, from Dream Days by Kenneth Graham (the edition I mentioned was published by Ten Speed Press in 1993. ISBN 0-89815-546-0); the image is from the New York Public Library Digital Gallery of Maxfield Parrish's work (Image ID: 1698241).

Posted by Owlfarmer at 8:39 AM