It may be a sign of age, but I do try to be moderate in most things (I lack "passion" some would say); every now and then, though, something really gets up my nose and a rant just bubbles up--kind of like a spit-take.

It's not enough that both political parties are yanking stuff out of context to support "arguments" about what the other guys are doing. The most egregious of recent examples is being used by the Republicans to paint Obama as being "anti-small business" because he insisted that we don't do anything on our own in an unfortunately worded (i.e. longer than one sentence) comment about our dependence upon infrastructure.

But the so-called "Liberal Media" (capital letters--as on the truck I occasionally follow down the highway to Dallas that sports a bumper sticker in the window that says "I don't believe the Liberal Media"), in their efforts to sound more non-partisan, occasionally feed the shark.  Last Thursday morning, in NPR's coverage of Romney's speech before the American Legion, a reporter on Morning Edition quoted one of the most blatantly racist remarks I've heard spoken publicly in some time.  A woman, when asked what she thought of Obama, said "I just don't like 'im; can't stand to look at 'im. I don't like his wife; she's far from a first lady. 'Bout time we get a first lady who acts like a first lady and looks like a first lady."

Say what??  How are we supposed to take that?  We'll never know, because the report didn't include any follow up.  Did the reporter ask her what she meant by her remarks?  (Note: Apparently Ari Shapiro didn't have time clarify; see the Wonkett post linked below).  But it's certainly a sound bite--one that rankled some folk other than me (the Obama Diary; Left In Alabama; Wonkette). What are we to make of this?  How can we not see this as racist, without more context? Unless, of course, she didn't think Laura Bush looked or acted like a first lady, either. Hillary Clinton was, of course, one of those uppity wimmin who didn't do much of anything first-lady-like, but somehow I doubt that this woman's remarks were directed at the most recent Mrs. Bush.

I usually applaud NPR for the length of its stories, but this one short bit, designed (I guess) to show how much support Romney has among older vets, failed miserably because it leaves so many questions to be asked--and answered.  Is NPR editing for effect?  Boy would I love to have heard what else that woman had to say; maybe she just didn't like all the sundresses and bare arms.

Every day, probably five or six times every day, I get requests from the Dems to fork over another 5 bucks to address some quip by some Republican.  I told the nice lady on the phone a few months ago to just take my name of her call list because 1) I'm not going to answer anonymous calls and 2) I'm smart enough to give what I can (or want to) when I can or want to.  I  pay enough attention to the news to know that whatever problems I have with Democrats pale compared to what the so-called Republican party wants to do.  My friends--and even my parents--thought I was a right-winger when I was a kid--but compared to those guys in Tampa, I'm a flaming Communist. This is not only not my father's Republican party, it's not even my own from 1964.

As the saying goes, everyone's entitled to their own opinion; but they're not entitled to their own facts (or, as C.P. Scott editor of the Guardian, reportedly once said,  "Comment is free, but facts are sacred").  The Republicans ignore factcheck.org and fundamental rules of logic at their peril, because what little faith I have in American intellect leads me to hope that most of the populace will wake up before the election and decide en masse that they don't want to joint the Stupidism movement.

A post-script:  I got a chance this morning to unload on a survey conducted by the Obama campaign; in my comments, I asked that the Democrats refrain from taking quips out of context and reporting or using any information that couldn't be verified as factual.  If anybody actually reads my remarks, I'll be happy; I'll be ecstatic if anybody actually pays them any heed. Also, as I was looking for an illustration for the post (knowing that I wanted something to do with the old "three wise monkeys" story), I ran across this on Wikimedia: 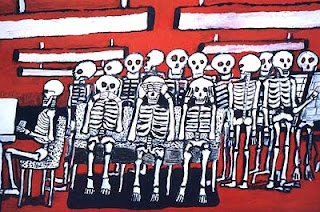 It's by Stuckist  artist Peter Absalom; whilst Stuckists are a rather laudable group (they oppose the kind of conceptual art that particularly annoys me), I was reminded by the picture that their name was chosen in much the same spirit as I've decided upon "Stupidism" to describe our present political malady.


Image credits: The Three Wise Monkeys relief decorates the Toshogu temple, one of the UNESCO World Heritage sites at Nikko, Japan. The Peter Absalom work is noted above, but I also got that from Wikimedia Commons.
Posted by Owlfarmer at 9:43 AM

Unfortunately, what you've written above is exactly why I just don't pay much attention to political arguments. They are nothing more than longer political advertisements, meant for attack, not illumination. It's sad when most speeches need a follow-up news article to "fact check" what was said.

Political reporting must be a frustrating exercise.

I am very discouraged by the disregard for the facts by both major parties. I was moved to write to the local paper recently when the Republican candidate in our newly-redrawn congressional district started painting herself as bipartisan and bringing people together, when in fact, she has been as partisan as anyone when she was in the state legislature. Now she has unleashed an attack ad on her opponent. Originally from Indiana, he now runs a small business to assist veterans in Washington D.C., and is now moving back to Indiana. He does not hold a government job, but he is a "Washington insider." She criticizes him for "liking Washington so much he owns three homes there." She fails to mention these are investment properties which he rents out.

Enough already with the lying!