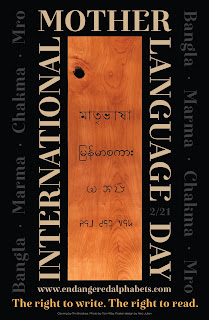 As an addendum to my last post, I'd like to note that February 21 is the United Nations' International Mother Language Day, which this year emphasizes the importance of appropriate languages of instruction, usually mother tongues, in early years of schooling. It facilitates access to education – while promoting fairness – for population groups that speak minority and indigenous languages, in particular girls and women; it raises the quality of education and learning achievement by laying emphasis on understanding and creativity, rather than on rote and memorisation.

This event was the focus of the Kickstarter campaign initiated by Tim Brookes to create the carving featured on the poster above, and send it to Bangladesh where it will be displayed at Bistaar (the arts complex in Chittagong) as part of the Mother Language Day festivities. The effort almost doubled its goal (originally $1000), and the excess will be used to foster other goals related to Endangered Alphabets.

I initially became involved with these efforts because of my general interest in language and writing systems. In fact, a major component of anything I teach revolves around the importance of the visual communication of stories, ideas, and the human experience in general. This week's topic in Art History 1, for example, focuses on illuminated manuscripts, some of the most beautiful objects ever created by human beings.

But we often forget that without language, and without a code in which to communicate that language on a readable surface, many aspects of human experience and history would be lost to us.

I'm frequently reminded that I'm not alone in my interest and concern, even though the linguistic desert in which I live makes me feel that way sometimes. My news feeds in the last week or so were full of information on Genevieve von Petzinger's research in caves around the world. She has recorded geometric signs found at 146 rock art sites, and categorized them  according to shape in order to begin to understand what they might mean. A handy chart of these is available on the Bradshaw Foundation pages that describe her work. The variety of signs and their contexts may eventually lead to better understandings of why people have made these marks over such a long period (from the Paleolithic on) and over such an immense space. And even though controversy exists (and will most likely persist), it seems clear that early human populations "meant" something by them. They don't have to be a form of writing in order to communicate something to their "readers." But in essence, because we'll probably never really understand them ourselves, that something is lost to us. 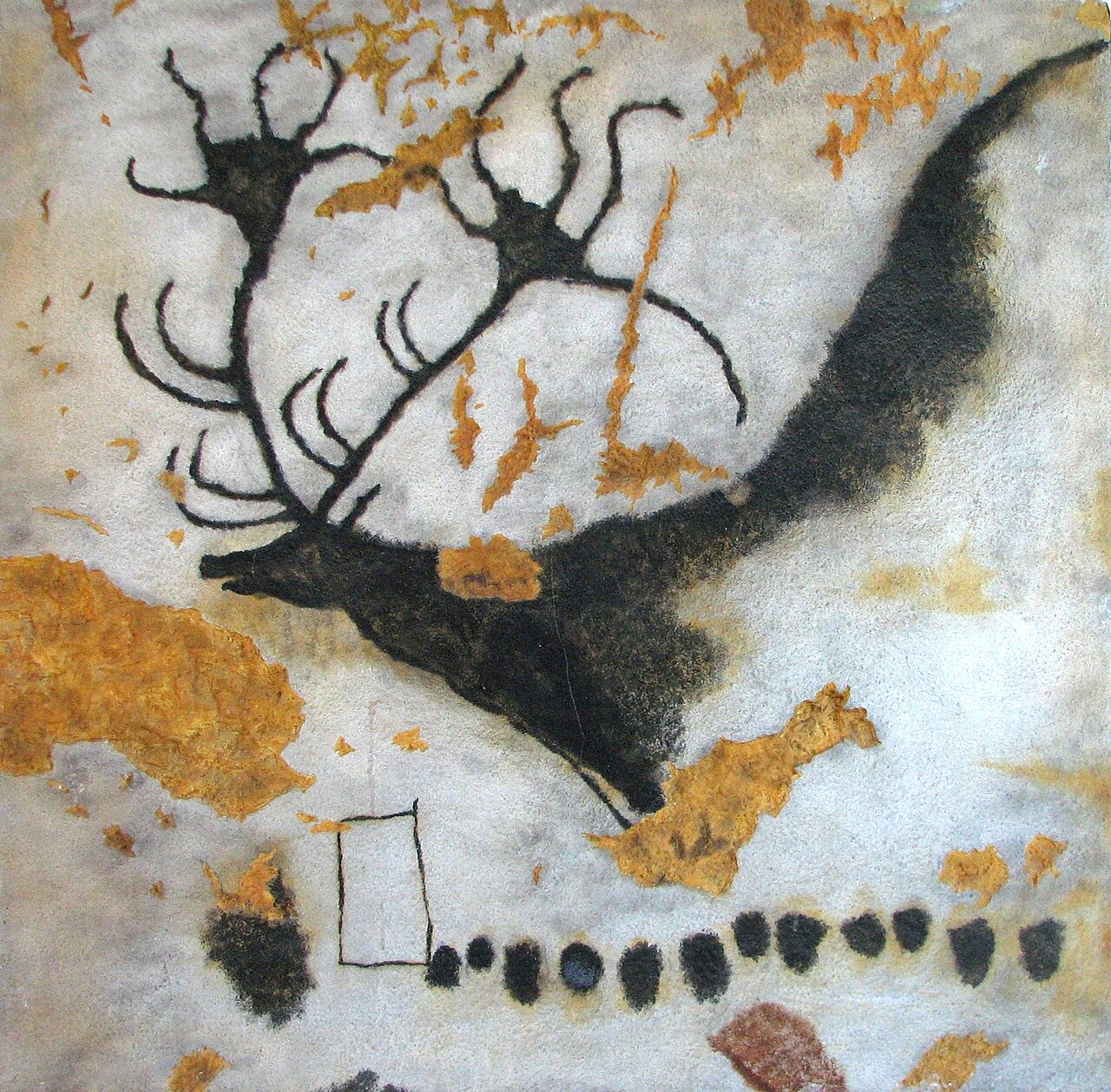 Megaloceros with a line of dots at Lascaux Cave

English speakers in general, and Americans in particular, seem to be confident that our own mother tongue is so pervasive that it won't suffer meet its demise in the foreseeable future. It's precisely because of its ubiquity that it will no doubt remain one of the most-spoken and most-read languages in the world. But the history of language is abrim with examples of languages and/or writing systems that have been lost to one extent or another--from Cuneiform, Egyptian hieroglyphs, Mycenaean Linear B, and now Mayan (pretty well entirely deciphered) to Etruscan and Minoan Linear A (either only partially understood or completely undeciphered except for sound values).


Decipherment of not-yet-understood scripts is a tricky business. One must have a large enough collection of samples in order to establish a frequency of signs, and the underlying language must be recognizable. So with the Rosetta Stone,  Jean-François Champollion and Thomas Young had a “crib” via Greek, and when Champollion realized that the third script must be Demotic (related to modern Coptic), the code could be broken. (The BBC article on the decipherment provides a nice summary of the  process.) After Mayanists such as David Stuart, Linda Schele, Yuri Knorozov, and Tatiana Proskouriakoff (among many others) had collected various bits and pieces of how the Mayan language worked from many different discoveries, Mayan was fairly rapidly deciphered. And when Michael Ventris realized that Linear B might be Greek (a notion dismissed by most at the time), he was able to figure out that the script did indeed record an early dialect of Greek.

But what we lose sight of today is the fact that, as David Crystal notes in his introduction to Tim Brookes's Endangered Alphabets,

Over the past twenty years, the plight of the world's endangered languages has attracted increased academic and political attention. The figures are sobering. At least half of the world's more than 6,000 languages are so seriously endangered that they are likely to die out in the course of the present century. (Brookes 7)

Even more troubling, as Crystal goes on to note,

Around a third of the world's languages have never been written down, and when one of those dies, it leaves no evidence of its existence behind. (Brookes 8)

For an eloquent appraisal of the problem, and more background, see Judith Thurman's March 30, 2015 article in the New Yorker, "A Loss For Words: Can a Dying Language be Saved?"

As a parting shot, I would like to remind folks that language is one of the major components of being human. It enables us to think and to participate fully in our cultures, as well as to communicate with one another. It's also our birthright. So if we dismiss the language in which we were educated, and treat it as if it were some throwaway commodity, we will ultimately diminish ourselves. English may be in no immediate danger of disappearing, but its depth and the craft of expressing it are suffering under the weight of modernity.

To celebrate International Mother Language Day, here are some suggestions: visit some of the links above to discover the breadth of the problem and learn about some of the solutions people are developing. And for English speakers who are not yet concerned about diminishing language skills, here are two articles, one I found only recently and that describes the consequences of diminished vocabulary ("The Limits of Our Vocabulary Reflect the Limits of Our World," by Anna Brix Thomsen for The Hampton Institute), and the other a classic that I've used in every critical thinking class I've ever taught (George Orwell's 1946 essay, "Politics and the English Language").

Then go out and write something beautiful.

Image credits: The Mother Language poster was designed by Alec Julien, and photographed by Tom Way. Tim Brookes carved the text in the four languages of Bangladesh: Bangla, Marma, Chakma, and Mro. The Megaloceros image is from Wikipedia.
Posted by Owlfarmer at 9:06 AM

Not many people know that the planned international language Esperanto has native speakers too. See:
https://www.youtube.com/watch?v=UzDS2WyemBI It was never planned that way, but it happened, and I have met about a dozen native speakers over the years. If it is possible for the speakers of a language launched into life in 1887 to transmit it to future generations, then surely the same should be true for more ancient community languages.