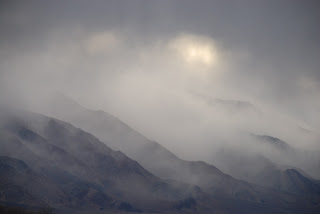 Seldom have I chosen a more poetically appropriate image to illustrate a post. Some may have been accurate as documentation for an event or object, but in terms of metaphor, this one tops everything.

The post's title is also appropriate on several levels, because it describes both a physiological condition associated with age, and a consequence of technological malfunction. Combinations of the two, it seems, can turn into catastrophes of major import to the one who experiences them.

And so, the fog-blanketed Inyos outside of my hometown, photographed on our way out of Owens Valley in the winter of 2014, symbolize aptly the conditions perpetrated by my ageing brain and my lack of expertise in things computer-related. For most of the past twenty years, since I first purchased my web domain (in 1997) and began this blog (in 2007), I've gotten by--flying by the seat of my pants, knowing just what I needed to know to do what needed doing. For the most part, this has worked. I hadn't really had the time while I was still working to learn the skills I needed to design better websites or properly manipulate images, or even understand more about the technical side of what I was doing. I simply winged it, and stayed lucky.

Until this week.  In the process of trying to diminish my download files, I ended up wiping out most of the document files on my Mac.  After my panic had subsided enough, I bought some recovery software (probably not the best one I could have, but it gave me a free download to try it out), and I've managed to recover what seem to be the most important files (after long days of painstakingly opening, sorting, and filing over the last week).  Some are still accessible elsewhere, having been uploaded with webfiles on Owldroppings,  but the short-term stuff (some recent journal entries, budget files, and lists of which ancestors lived with whom every ten years between 1850 and 1930) is gone, like much of my own short-term memory. And so are the e-mail letters I transcribed from my father when I decided to preserve them in case my e-mail account tanked. These I will miss the most.

Only a week or so before this happened, I had mentioned to the Beloved Spouse that I really needed to get an external hard drive to back up my stuff. But, still being something of a procrastinator, I hadn't gotten around to it. Well, now I have. There's a nice, compact little 1T machine plugged into the Mac to aid my Time Machine so that I don't have to go through this again.

In the meantime, I've probably lost my P22 fonts (although I haven't tried to recover graphics and images; the scans are saved so I can do that later), along with stuff I probably don't remember I had. Which is undoubtedly a good thing. I could get the fonts back, even though they're on 3.5" floppies (I've got a USB floppy drive)--except that we recycled them earlier in the summer when we started cleaning out the garage.

I'm getting over it--probably as a side-effect of Black Heart (the ability to forget losses engendered by the frequent up-rootings of life as a military brat). I'll eventually go back over the Ancestry census files I've attached to ancestral names in order to reconstruct the Excel files I built to help sort out familial mysteries (such as which Hannah Scofield is really my grandfather's grandmother). I'll rebuild my new budget template, which will be relatively easy now that it lacks two major expenditures per month (the mortgage and the Jeep having been paid off--although my "red-letter day" account of the events is now gone from my journal), and two fewer paydays. I'll probably wake up in a cold sweat some night not long from now, upon suddenly realizing that something critical is missing and I haven't yet realized it, but I'm hopeful that I've come through the worst of it.

I did manage to recover the stories I've been working on over the years, and both Word and .pdf versions of More News From Nowhere (in case the web version disappears in the EMP). Even the most recent of my "Old Bats In Space" efforts was recovered. Its potential loss may have been my biggest fear because I'd spent a couple of weeks revising it and bringing it up to date, just before the end of July.  Nothing after July 31 seems to have survived at all.

Thus, in an effort to start fresh, I've redesigned my blog template a little--although it's only temporary. I need to work on it more, but thought that the new banner and template might help to cheer me up and get me back into the spirit of things.

That, and I will be taking advantage of Google's archiving tools.  I'm not sure what I'd do if I lost the last 9.5 years of the Farm. The image on the banner, by the way, is another shot from Winter 2014--taken at Uhlmeyer Spring.

What this experience has taught me is that the current mania for simplifying, de-cluttering, and paring down may have serious consequences for those of us who value the past. I'm certainly going to be a great deal more careful about what I toss--and how I go about "deleting.". My children don't know it yet, but they're the ones who will have to do the final sorting, because I'm going to be much more reluctant to diminish the family archives while anyone's still around who might care about them.