Learning To Love The Prairie 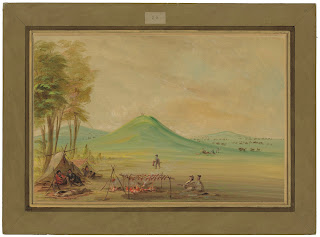 The last few days have been unexpectedly pleasant, and I've enjoyed myself more in the last two weeks (after the all the home-keeping effort that went into preparation for our post-conference convivium on the 29th of April) than I can remember having done in recent years.

It's probably truly ironic that the changing climate is at the root of the decent weather and the delayed onset of sweltering heat. Never mind that the days leading up to the Heidegger Symposium, and our first entertainment effort in several years, caused untold angst because of decisions that had to be made about where to cook and where to eat and where everyone was going to sit. The humidity was high enough that we expected thunderstorms nearly ever day, but as the event itself unfolded we were able to get out to the back yard for schmoozing and trailer touring, and even some eating--even though there was some rain. Everyone found a place to converse, and the dining room had became a sort of bar by the end of the evening. It was good to have convivial company and pleasant conversation--and it looks like we may do it all again next year.

One thing that makes our life here tolerable is the fact that McKinney, despite its being nestled in the heart of one of the most right-wing counties in the US, is surprisingly progressive in some ways. We have good recycling, the city encourages water conservation, and the downtown area around the old Courthouse square boasts numerous terrific restaurants, wine bars, pubs, and pleasant places to shop. There's even an antiquarian bookstore right off the square, complete with a bookstore dog. Antique stores and local food sources abound, and there's a nearby farmer's market on Saturday mornings. The conference was held in the Courthouse building itself, which has been converted into public spaces for all manner of community activities. We rented a pleasant room for the talks, had coffee brought in by the non-profit cafe across the street, and many of the attendees were able to stay at a nifty old hotel only steps from the conference venue. The ability to walk everywhere was one reason for holding the conference here, and it drove home to us the wisdom of our decision to move here in the first place.

So, even though it's taken a good sixteen years to realize it, staying put may be the smartest way for us to spend our retirement years. We can travel (in the Shasta, of course) when we want to get away, but putting time and creative energy into the house and property is becoming more and more attractive as a life-goal. This prospect occurred to us this last Saturday as we walked up to City Hall to vote in local elections for mayor, city council, school board, and trustees for the college district for which the Beloved Spouse teaches. We had lunch in a lovely new restaurant, bought a hand-grinder for coffee beans at my favorite store (Etienne Market), and walked home for a bit of a rest before dinner. We were thus able to really enjoy the last lazy weekend before all hell breaks loose: final paper grading and the NJCAA Men's National tennis championships for him, and cataract surgery for me.

Dealing with geezer eye issues is relatively simple these days, and Medicare covers the basic operations (two, a week apart). Chances of problems are slim, and the reward should be improved eyesight and less reliance on glasses (although I won't be able to give them up entirely). Even so, I'm spending my mornings in the back yard with the animals and visiting wildlife, enjoying the view and noticing everything I can--just in case.

Mornings out in cool weather, attended by amusing pets and rambunctious birds and squirrels are certainly worth putting up with occasional scary weather and cranky neighbors--as long as tornadoes, heat, and mosquitoes don't conspire to counter the pleasantness. Enough nice folk and community aspects are beginning to make permanent exile a more attractive option than it has seemed in the past.

We shall see. But for the moment staying put may actually be a viable option, and feels much less like simple inertia. Years ago I started writing an essay about the process of learning to love the prairie; I never finished it because events and interruptions kept getting in the way. I'm not sure that I'll ever truly love this area with the kind of affection the eastern California desert inspires, but perhaps I can learn to accept the gift of good land (to borrow from Wendell Berry) and a good house, and a life far more filled with contentment than I might ever have hoped for this far away from home.

Also, I won't have to move all my books.

Image note: Because I don't have any recent prairie photos, I'm borrowing this from George Catlin: Expedition Encamped on a Texas Prairie. April 1686, via Wikimedia Commons