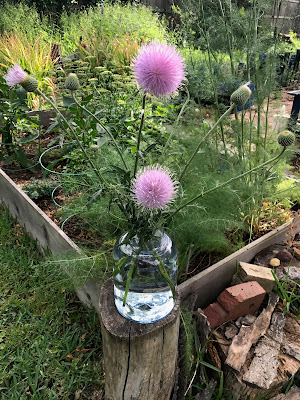 Families have a variety of ways of acknowledging their dead, many of which involve rituals taught to the young and fondly remembered after the instructors themselves are gone. My grandmother--whose husband was a veteran of World War I, and whose eldest son (my father) served during three different conflicts (World War II, Korea, and Viet Nam)--firmly adhered to a Memorial Day tradition of gathering up all of the flowers blooming in the yard into a bucket and taking them up to the Big Pine Cemetery, where a large number of our forebears and their offspring now rest.

The old galvanized bucket was filled with lilacs, coreopsis, honeysuckle, Rose of Sharon, trumpet vine, and anything else that might be in bud or bloom around her little plot in my home town, where she lived after my grandfather died. While I lived with her and whenever I was visiting at the appropriate time, I'd tag along, and be told the stories associated with the different names and graves.  And although I seldom make it home for Memorial Day any more, I never return to the Owens River Valley without visiting those graves, which now include hers and my father's. 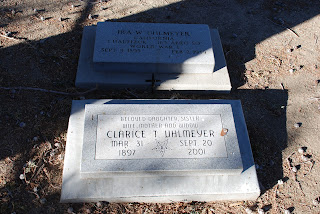 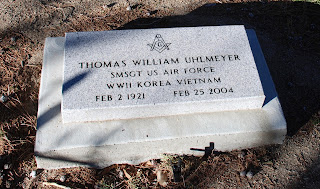 Nowadays, I gather flowers in her memory--although I try to keep the number low, because she preferred that blooms be left where they belong (except when being toted up to the cemetery). This year Mother Nature has given me a very large thistle plant, growing just off the lawn in front. I let it be until it began to blossom, picked one stem, and left the rest. But since they were likely to be lopped down by some overzealous "lawn boy" from next door, yesterday I cut them all for this year's bouquet--and have used a photo of them at the beginning of this post.


Like my grandmother, I try to let things grow where they want to, and am often rewarded for being patient with mystery plants. I encountered my first example of this flower not long after we moved here, and I've had them sporadically ever since. I'm hoping to save some seeds this time, and to plant a more permanent "crop," even though they're painfully prickly. But they're so strange and lovely that they look almost like cartoon flowers, or some sort of alien life. The Beloved Spouse thinks they look like Dr. Seuss flowers.  At any rate, they're rewarding, fragrant and long-lasting, and much prettier than the common thistles that grow along the margins of Texas highways. It doesn't really match any of the descriptions in the Lady Bird Johnson database, but I'll do some more research anon.

Meanwhile, I'm enjoying another pleasant day (after several sticky, seasonably hot ones) and am ready to retire to the back quarter-acre with a glass of vinho verde to while away the early evening, remembering good stories and good people.
Posted by Owlfarmer at 2:58 PM