It's a bit early (the 19th rather than the 20th or 21st), but Spring has arrived, and even in soggy, potentially plaguey, North Texas, there are signs of its presence--despite the absence of any real winter weather during December, January, and February.

I went out a couple of days ago looking for phenomena (from the Greek phaino, to appear), the subjects of phenology: the study of things that appear (in this sense, as signs of biological change according to climate). Having already been sequestered indoors by the extended period of rain we've endured in north Texas, I was happy to get out for the few minutes during which the sun managed to make its appearance. It was encouraging to see how many members of my garden community were getting ready to burst forth with flower and fruit. 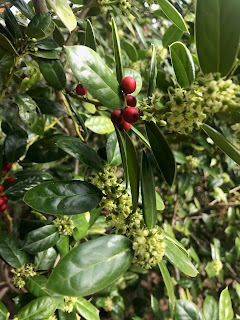 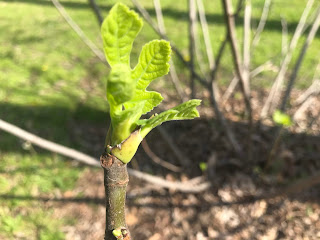 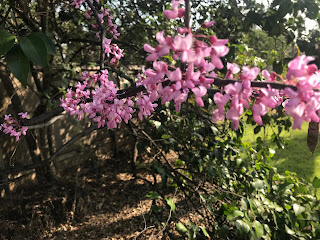 The holly next to our front porch was headily fragrant and abuzz with bees. Our backyard fig is leafing out nicely (with this weather we should get two crops this year), and our scraggly little redbud tree is putting forth valiantly. It gets smaller every year, but I keep hoping that its prolific seed pods will allow one or two more to spring up elsewhere.

The wisteria that we let grow wild on the property was only beginning to bud then, but today, as if to herald Spring, it was blooming well and had begun to perfume the yard behind our garage. 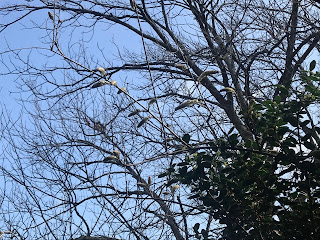 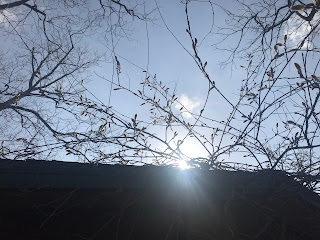 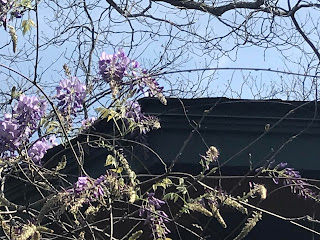 This isn't much, I know, for a Skywatch Friday post, but it's part of my effort to find the small, beautiful things that I wrote about yesterday. Although the rain is due back this evening, next week promises several clear days in a row. Conducting local phenological research is balm for the spirit in these fraught times, so I thought I'd offer these examples up, despite their scanty views of skies, in celebration of the equinox and a new season. Be well, be careful, and enjoy what you can. And Happy Skywatch Friday.

Image notes: I hope to start using the Canon Eos again soon; I used my aging iPhone 7 for these, hence the scruffy quality. But I was anxious to get a few shots before the rains returned, so settled for what I got.
Posted by Owlfarmer at 11:50 AM

Pretty shots, and great that you could get out and check out the phenomena!

Hubby and I shop once a week and buy just what we need. We live lightly as you said too. I am glad you were able to have your procedure done before the hospital changed the protocols. We have been taking local walks, so to get outside, rarely seeing other people. I would love to have some wisteria growing, pretty skies! Stay safe and healthy! Happy Skywatching! Enjoy your day and weekend ahead.

Pretty photos....is that wisteria? I need to plant some...smells so good!

Tanya: Indeed it is wisteria. It grows more plentiful each year around our house, because I haven't the heart to tame it. Just as the fragrance begins to fade, the Chinaberry tree nearby starts blooming (clusters of little purple star-shaped flowers). I'll try to get a shot of that for my next Skywatch Friday post. Thanks for stopping by!