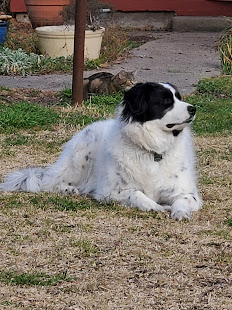 Actually, I'm not sure where "there" is, but "somewhere not here" (a corruption of a bit of dialogue from the "Ariel" episode of Firefly) comes to mind. So does a temporal interpretation, as in "somewhere in the future" (or "somewhere not now"). A bit of nonsense, of course, but I live in Texas. Only because I don't really have a choice in the matter. And I live in Texas at this particular moment in time (having been in and out of the state for varying stretches over the last seventy years). But we do love this house, and enjoy our time "just hangin'" with the "buds" (above) in good weather.

What gets in the way of our ability to be better satisfied with our lot are conditions like our governor's recent display of bad judgement, and the persistence of neighborhood nastiness that assumes anyone who doesn't believe that Dr. Seuss was banned, or that Mr. Potato Head was tragically emasculated hates America.  I've had to turn off notifications to a "what is this world coming to" thread on the Nextdoor app because so many folks who live around here see cultural sensitivity or empathy as evidence of a socialist campaign to "cancel" the sanctity of American culture.

Anyway, what I'm really musing about these days is the possibility of being able to travel west to visit family in Idaho and Washington. We were beginning to map out just such a trip last March, before having to dial back our plans to accommodate a cardiac intervention (stent) and the uncertainty brought on by the descent of the pandemic.

Now, however, a year on, I've been fully vaccinated, and The Beloved Spouse received his first dose yesterday, with the next one scheduled for April 2. My problematic cardiac history earned me the solicitous care-taking of my heart docs, so even though I'm a bit young for the top of the first tier (I'm "only" 73), I got on a list through the hospital (lovingly called in our family "the Baylor Scott White Hospital, Resort Hotel, and Spa") with which I do all too frequent business.

My daughter, who is a crackerjack IT admin, and who shares some of my crappy cardiac genes, found an appointment in Houston, and made a day trip down there to get her first dose. Then she found a slot in Amarillo for her second--and used frequent flyer miles and a free rental car to take advantage of that. Her problem-solving and travel-arranging skills came in handy, and have helped relieve a great deal of angst connected with her in-office work schedule.

As it turns out, thanks to the recovery bill, vaccination rates should be picking up considerably in the near future, and some semblance of normality may well resume sooner than we had any right to expect-- especially in a segment of the country with a problematic attitude toward science, expertise, and reason.

What all this leaves a bit of room for now is anticipating the advent of spring.

This is going to provide an interesting exercise in phenology, because the winter storms have produced enough damage to promise a range of surprises. The biggest question at the moment is whether or not the three large privet copses we've nurtured over the years will survive.  Most folks regard them as trash trees, but we like them because they're volunteers that grow fast, provide lots of shade, bloom with lovely white flowers, and even give the birds something to eat after they've denuded our hollies. The latter did quite well, actually, although mobs of robins and cedar waxwings crowded them for food and shelter during the storms. By the time the snow was gone, so were all the berries, including any that had been knocked off during the melee.

But the privet leaves are all brown now, and are falling off. We'll have to wait and see if they'll re-leaf, or if we'll have to turn them into firewood for the log-burner we're planning to install before next winter.

Some of the perennials have survived, but others (like my lovely Lilies of the Nile) seem to have succumbed. Just before the storms, I had bought two fragrant climbing yellow bare-root rose bushes, but didn't have a chance to plant them. They, too, appear to be non-starters. Nevertheless, the Roses of Sharon sport tiny green spots where flowers will later emerge (white, pinky-purple, and blue), and the daffodils and muscari have emerged  in all their usual glory along the fence behind the greenhouse. I had covered the daffs with rugs before the storm, and cut the blooming paperwhites to bring indoors. The daffodils made it, but the un-covered (and de-blossomed) paperwhites are now mush. I'll have to try and dig them up later to see if they'll need replacing. 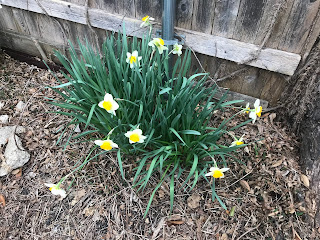 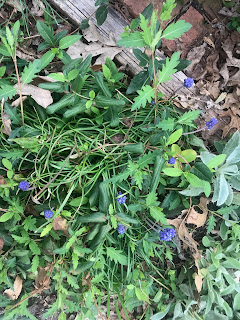 To my surprise, a few of the geraniums I unwisely left on the back porch during the hard freeze that penetrated the house (it got down to 18F inside) actually survived and are now greening. And my faithful pot of pansies--which won't make it through the summer--got by with a couple of bedsheets to protect them. 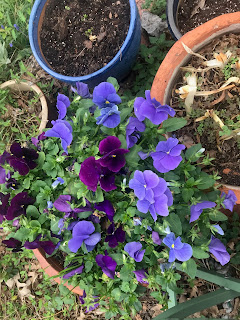 Alas, it appears as though the row of nandinas that came with the house when we bought it seem to have met their collective demises. This will, however, permit us to chop down the dead wood and place a well-insulated tool shed up next to the fence in hopes that it will block at least some of the noise from next-door's pool pump. I experienced ten minutes of sheer, quiet bliss the other day when it was apparently shut down for maintenance. And then it was turned back on, so the animals and I abandoned the yard in disappointment. Plants do little for noise abatement, but a reinforced, insulated shed stuffed with gardening tools may well offer better help.

One of the real treats of back-yard living around here is the frequent appearance of assorted raptors. On my way out the back door a couple of days ago, I heard a sound that made me look up. Upon doing so, I was greeted loudly by what seems to be a young red-tailed hawk. 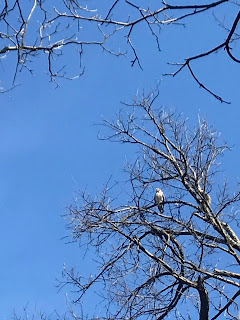 TBS, who is a great lover of majestic, screechy birds, came out with our new Celestron binoculars (my birthday gift timed to observe the Jupiter-Saturn conjunction last December), but we weren't prepared to erect the tripod and attach his phone's camera. So I just shot a little video with my antique iPhone and then watched it fly away--without catching that, either. Sometimes it may just be best to enjoy things while we can, because of their ephemeral nature.

Like a surprise visit by a gorgeous animal that obliterates the highway noise of a suburban neighborhood in a problematic part of the universe.

Spring begins on Saturday, the 20th: a harbinger of better times.

Great post. So much to digest. I thought privet could survive anything so was surprised by that. If what you call Nile Lilies are what i also know as agapanthus, they should come back. In NZ they never lose their green. In my UK garden they died back and regrew ever year. On the more serious note American culture. Without having experienced it except via TV and films, news items and people from there who have travelled outside it - i got the impression its strength (like the country i come from) was its immigrant diversity, a resilience and willingness to be adaptable with available resources, use of initiative, .... open-mindedness to new ideas and developments...The news, the views, we have been getting for the last few years seem to be putting the lie to that, but like I say I'm on the outside and what we get might just be the 'squeaky wheel' effect. Those who shout loudest usually get more attention. The silent ones may still be the vast majority getting on with being the Americans i always thought you were.

It is great you have been able to get the vaccine shots, we are still waiting the the first dose here. Traveling and eating out are a few of the things we are waiting to do, once we feel safe. I am sorry to hear about your trees/plants were damaged from the winter storm. Maybe they will come back. Love your furbabies, the red-tailed hawk and your pretty blooms.
Take care! Have a great day and a happy weekend!

Tigger, the lillies are indeed agapanthus, so thanks for the encouraging words. They've always come back before, but this time they look much worse. I guess we'll see. Other things that I thought were gone are coming back even in the last couple of days, so I shall hope on.

The political situation in the US has deteriorated so badly in the last five years that I do wonder about resilience. I'm old enough to have lived through the tribulations of the sixties, and began to think that change might occur. Some things have, others not so much. I'm still hoping in this regard as well.