Spring At Last--More Or Less

I meant to get this up yesterday, on the actual date of the equinox, but I became sidetracked by revisiting old spring posts and comparing notes with myself. For a different spring celebration, peek back to last year's post with its better photos and better outcome: Finding Things to Celebrate: The Vernal Equinox. 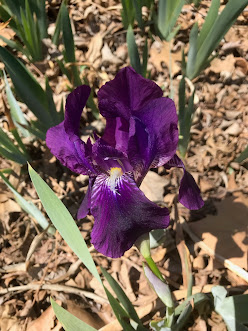 This year, everything's late, with the exception of one lone iris; these usually appear toward the middle of April, but this one was apparently confused by the unusual weather. Wisteria, which should be in full feather at this point, is only just beginning to bloom. I can smell a  bit of holly blossom, but the flowers are still almost invisible. Daffodils are pretty much gone, but it does look like the paperwhites will survive, since their stems are back. Meager bits of redbuds are showing, but it's clear that we've lost a major trunk. I may give up and plant a more robust version in its corner, now that I've moved the compost bins (to keep Molly from using them to vault up to next-door's fence). I do enjoy encouraging the volunteers, however.

There should be better sun in that corner this year, due to the severe pruning we did of the privets last fall. Speaking of which, there's still no sign of life on those. But one I planted on the back fence two years ago is leafing out nicely, although it won't be of much use as a screening plant for a while, because it's still quite small.

By this time last year, the figs were promising; big leaves had emerged and a couple of tiny figlets were popping up. This year: nothing. It may have frozen down to the ground this year (as it has in the past), which means we'll have no figs until quite late, if at all. Sigh.

What this all adds up to is that every day brings a small adventure. As soon as I can get to a nursery, I'll fill in some gaps with perennials. I'll get baby veg from Whole foods, and maybe a couple of well-started tomatoes from Costco, but I'm a little less ambitious than I have been.  Now that the greenhouse is in, the soil needs building up, which means assembling compost and well-rotted goodies from behind the garage. This is the site of an attempt at hugulkultur, but has mostly been forgotten, so it's probably time to do something with whatever has come of it. What we need to be doing now is planning for the future that involves mostly things that come back without our help. Now that I have access to a local farmers' co-op, growing an abundance of my own food is less compelling.

The Beloved Spouse and I recently came to a rather sudden realization that moving west permanently is so impractical as to be impossible. (It involves clearing out the garage.) So we've begun to focus on making our place as habitable as we can, and as tolerable as is practicable. This involves putting up a well-insulated tool shed to block the pool pump noise from next door, creating more seclusion by judicious planting along the back and side fences, and rewilding major swaths of the property--while still maintaining spaces for pet-entertainment, human conviviality, and post-pandemic social engagement.

To address our continuing malaise about where we live, we've vowed to take Porco and the pets and just get out on the road, frequently. In early April, we're taking a trip to Lake Mineral Wells, one of my old hiking haunts from about forty years back. A longer trip much further west is in early planning stages, and exactly when will depend on traffic. RV travel has been quite popular during the Plague, so we're unsure about when we should go. At the moment it looks like late spring or early fall, to avoid as many crowds as possible. The popularity of Nomadland and YouTube RV vlogs makes us a bit leery of gigantic fifth-wheels taking over the desert in mobs. But we will be able to boondock, so that promises to open up some options.

By April 2 we'll both have been fully vaccinated, and so will most of our family. Things are thus looking up, and we should have a fair-weather respite before warm-weather storm conditions begin factoring into our travel ambitions.

I've written before about my efforts at learning to love the prairie, but hadn't realized at the time that it would become so difficult. Noise, politics, greed, and concrete are only a few of the components that make retirement much tougher than we had anticipated. Some of that has been ameliorated by the regime change in DC, but it will be some time before this part of the world gets over its antipathy toward intelligence, wisdom, and expertise. [Revisiting the linked post (to 9 May 2017) has provided a bit of perspective (we were also contemplating permanence at the time); the current condition of my memory makes it difficult to recall all of the many attempts I've made to reconcile myself to exile in Texas.]

Unfortunately, time is what we have less and less of. But spring does make it easier to ease our anxieties and make better use of that time, by ushering a welcome breath of optimism.

If anyone who reads this is wondering (as my students used to, constantly) why anyone would want to maintain a blog (let alone more than one), philosophizing and fostering memory both provide compelling excuses. Not many folks frequent my posts, but in the absence of friends and family to keep memory alive, writing is its own reward. I recommend it to young and old alike, because time itself is so very fleeting.

The last year, as problematic as it has been, is gone. Already. Although far too many people have suffered far to grievously,  it will not be long now before what becomes normality (I'm not sure we can actually return to it) overcomes the recollection of at least a few of the trials.

So, if you haven't already, I urge you to at least begin to keep a journal. Think about shifting from daily snippets on Facebook to longer, more thoughtful posts directed at your family and its collective memory. I have only recently discovered how very fortunate I have been to acquire a repository of family letters, and to have kept numerous journals and several blogs. I rejected Facebook and Twitter from the beginning, and will have more to say about what Jenny Odell calls the Attention Economy in my next post. In the meantime, I'm going out to lay in my hammock with Odell's book, and enjoy the first full day of spring.

Be well, stay safe, and get vaccinated!!

Happy Spring! Hubby and I often talked about moving west, to Washington State. It is a beautiful state and we loved visiting the state. But, I think we will be staying put. Trying to travel more, I could never drive an RV. It sounds like fun. I have always wanted to drive across the country, stopping at various parks. We only plant some tomatoes and herbs. I kind of use my blog as a journal or memory keeper of places and things we have done. We are waiting to get our vaccine, then we will feel a little safer and free to travel. Take care, enjoy your day! Have a great new week!

Dear Owlfarmer,As one of the people who does "frequent your posts", I always find them thoughtful and moving, especially now that I've entered the retirement phase of life too. So please do keep up the good work for the benefit of the rest of us! Tony Pinkney