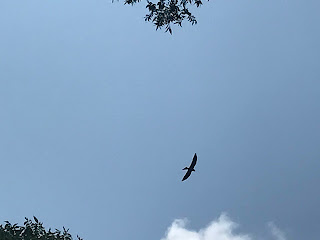 The title of this post is a (shamelessly opportunistic) corruption of the perennial British crime fiction TV favorite, Midsommer Murders, but roughly describes the latest observations in the accidental/anarchist's garden.

A few days ago, during my first perambulation of the morning with Molly, I noticed evidence of utter mayhem: feathers everywhere, apparently from a mockingbird, which had met its demise at the claws of one of our local raptors. 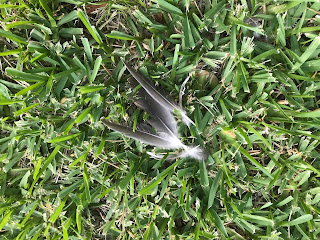 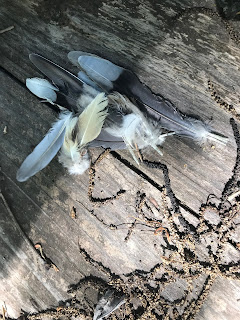 I attributed the carnage (although there were no grisly bits) to a hawk or an owl, both of which hunt in our yard, and went about my business. The next day, however, evidence of further havoc appeared in the same area, and this time it might have been a mourning dove. Since we often see barred owls, and sharp-shinned, red-tail, and other hawks flying about, activity like this does happen occasionally, and I thought I'd identified the culprit(s) when I captured some video of the swoops and glides of a group of raptors a couple of days later, after hearing their cries. The winds were up a bit and these birds (which I now think might have been Mississippi kites) were having a great time soaring on the thermals.
As it turns out, however, if these were indeed kites, as insectivores they were not the perpetrators of the previous days' butchery. If I were Detective Chief Inspector Barnaby, I would be able to rely on the skills of an excellent forensic scientist and his or her team in order to solve the crime. But I'm not terribly good at this sort of investigation, and haven't even been able to reliably identify the birds I filmed for two minutes after I caught one of them in the opening shot. I've only managed to locate a couple of websites that can help with silhouettes, and will just have to keep the real camera handy for the next time I hear tell-tale raptor noises. Maybe then I can get clearer evidence.
I should probably note that the day before all this happened, I had caught in mid-air a downy, floating feather from what was probably a large juvenile bird--possibly an owl. Since we've had experience with these chaps (one is likely responsible for the untimely demise of our beloved Emma, Molly's predecessor), one of their young'ns is now my chief suspect.
In my last post I mentioned the relative absence of butterflies (exactly one monarch and one black swallowtail so far), but that at least means that I haven't had to spend any time protecting caterpillars from death-by-anole or -cardinal. Part of this has to do with the fact that my usually voluminous fennel and parsley plants were devastated by the spring rains, and there isn't nearly as much black swallowtail food around. One of our three cardinal pairs has successfully nurtured a chick (finally, on their third try), but they're all foraging elsewhere.
I have had a couple of insectivorous surprises, though: spiders.
I finally have an argiope, which is my favorite garden spider. One built its web in front of my kitchen window when my daughter was a baby, and her first word was "'pider." Ever since, I've made sure to nurture any that show up, but we've only seen once in the twenty years we've lived in this house. Now, however, there's a small one in the cedar tree outside my study window. It has managed to construct its web next to one of the failed cardinals' nests, but nobody seems to have bothered it, and it's been a couple of weeks since I noticed it. It's also getting bigger by the day, and the characteristic stabilimentum that gives it the "zipper spider" common name is growing. 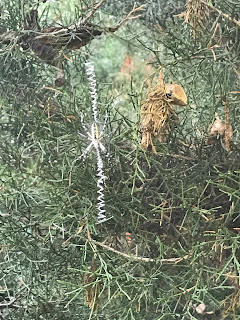 Also, just before our last rain (at the weekend), I almost literally ran into an orb spider in action, spinning an enormous web (the supporting ends had to be at least eight feet apart) across the sidewalk that leads out of our back door. The speed at which she worked was astonishing, and I caught a couple of minutes of her before I had become food for one too many mosquitoes. [Unfortunately, my lack of video editing skills and the file-size limits of Blogger have prevented me from uploading the evidence.] The web was almost complete, and I wonder if she managed to catch anything tasty before the downpour next morning obliterated the whole effort. I had left a note on the back door ("SPIDER WEB") to alert anyone letting out the dog or cat, but by the time I got down to check, it had disappeared without a trace.
So my efforts to track down predators this week have shown very limited success. Still, I'm glad that some of the faunal members of our little garden family are thriving; and even if some of them become victims of others, it's all part of the process. Sometimes it's comforting to know that something in the world is still working properly.
Image notes: The first "forensic" shot was taken in situ; the second is of a representative cluster of feathers, and the third was posed; Molly is not guilty of avicide, but rather had plopped down nonchalantly amidst the crime scene. The opening and closing shots were, unfortunately, obtained quickly and under sub-optimal conditions for getting the best out of an iPhone 7 camera.
Posted by Owlfarmer at 9:58 AM

It would take some pretty good ornithology skills to solve the mystery, but I will say your cat does indeed look guilty! Not long ago I kept finding little blob-like thingies in my yard, and finally identified them as owl pellets. They (the owls) were a big help in reducing my pesky mouse problem!

Your yard looks so lovely, but it is a veritable crime scene... very much like all the adorable British villages in the borough of Midsommer! Only, unlike those crimes, the ones that take place in your "village" are all because everything has to eat! Which is a philosophy easier to talk about than to experience. I like watching raptors but years ago when we had a garden I hated it when a merlin hawk began to drop in on my bird feeders as if they were his neighborhood cafe!

How big an owl is that to take a cat? We know there are such things as eagle owls, and yes they could take even a Tigger sized cat (6kg), but not imagined them living in suburbia. That spider web is unlike anything we see over here.

Our resident owls are mostly the Barred variety. The one who got our Emma didn't get very far with her (just dragged her a few feet away before dispatching her). I'm actually quite fond of owls (and owl pellets, for their educational value), and of most raptors--but now have mixed feelings about it all. I'm confident that nobody would even attempt to get Molly, who weighs about 20 lbs. and is quite well camouflaged (unlike Emma, who was a grey and white tuxedo).