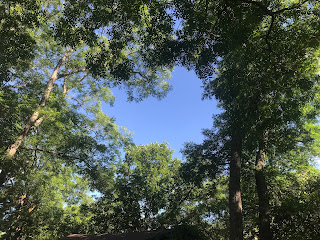 I was driven from my comfy chair just now by the onset of the weekly brigade of neighborhood lawn maintenance workers. Not neighbors themselves, because aside from us, I've only come across about two other households in the immediate area that "do" their own yardwork. Rather, there are a couple of "landscaping" companies that descend on our block and a couple of others nearby and drive us batty with their racket: usually on Thursdays and Fridays, as the homeowners prepare for visitors at the weekend. Their gas-powered lawn machines (not just mowers, but "ride-on" contraptions), trimmers, and (especially) leaf-blowers, all sporting noise levels so high that we have to close windows and doors and retreat to rooms as far away from it all as possible.

The cacophony from each only lasts for a half hour or so, but it happens in sequence, from yard to yard, and it only involves two companies, so it goes on for as long as it takes to cover the contracts each day. There seem to be at least eight properties close enough to cause discomfort, but I've had to adjust my reading, writing, and gardening times to their schedules in order to avoid raising my blood pressure.

By a somewhat ironical coincidence, this morning's reading involved the newest issue of Dumbo Feather--one of the Aussie magazines I subscribe to digitally.  It's a quarterly that features "conversations with extraordinary people" on a broad range of topics. This time it's on music, and I had just finished reading a lovely little piece on "The Dawn Chorus"--the phenomenon of morning birdsong. Thus inspired, Molly and I then went out for our morning stroll in the garden, with the particular purpose of enjoying the relative quiet (post-rush hour) and noticing what birds were about.

As often happens, Molly was startled by a loud truck thumping by and was easily persuaded to "run like the wind" (an actual command) into the house, where I made myself a cuppa and prepared to resume my morning read. And then the mower started up, and I had to move in here to the study. I had already planned to hunker down with the air conditioner on later, when the temperatures rose along with the humidity (it's actually quite comfortable now, under the fan at 86F/62%) to work on planning the coming trip west in September. So I decided to use the opportunity to grouse about one of my current preoccupations: aurality.

According to my elderly 1971 copy of the Oxford English Dictionary, compact edition, "aurality" isn't even a word, although Merriam-Webster says that it means "of or relating to the ear or to the sense of hearing," which I know only because the Fandom Wiki has a whole section on aurality in its article on "Writing Across Media Wiki." Discovering this was fortuitous, because it offers a perspective I hadn't thought of: aurality itself as a medium for conveying emotion, memory, and other phenomena often provoked by sensory input.

My own auditory capabilities are fading, slowly but irrevocably, into the common plight of the elderly: the hearing aid quandary. At the moment, The Beloved Spouse, whose own hearing is almost canine, is patient when I ask him to repeat what he just said (mumbled?), or to turn up the TV sound just a tad. And I'm actually happy that I miss some of the annoying noises that sift in and bother him. But this same condition means that I don't hear the far-off hawk calls or bullfrog choruses that he does, and will ultimately have to decide about taking advantage of my health plan's offers to help out.

For now, though, I'm still navigating other aural conditions that have arisen over the years. Like "stuck song syndrome" (earworm), which has afflicted me for some time now, so that I cannot bear to hear catchy tunes, and popular music-even my beloved early folk stuff--has become problematic. I'm still okay with jazz and classical music, because of their innate complexity, but easily repeated choruses and jingles can take days to get rid of, and often haunt my sleep. 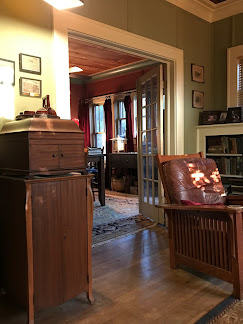 But the Dumbo Feather issue I'm going to go back to reading (now that the lawn blowers are finished for the time being) is about music and musicians, and I'm thinking about winding up the old Victrola (I actually have one--see left) for a little Artie Shaw, or maybe putting one of my Musical Heritage Society tapes, or a CD from one of my old issues of Esopus, or even Bob Dylan's vinyl Blonde on Blonde album, because I woke up this morning thinking about "Visions of Johanna" for reasons I will probably never understand. Time to put all those old media to work again.

Come to think of it, though, Dylan's music was often punctuated by musings on sound, so it's probably fitting to consider lines like "Ain't it just like the night to play tricks when you're tryin' to be so quiet," and myriad references to the noises associated with cities, such as those in "Johanna." They didn't bother me much when I actually lived in cities, like Philadelphia and Chicago, where subway car screeches, Harry Caray's announcing Cubs games over the loudspeaker, and street urchins' playing stickball seeped into windows and onto balconies and stoops as part of their aural landscapes. But McKinney a sub-urban town, not a real city. It still wants to promote a country-like "vibe," claiming to be "Unique by Nature," all the while pouring more and more concrete for more and more strip malls. And the ambient noise is pretty mon-aural: traffic and lawn machines.
And occasional fireworks. The recent Independence Day holiday lasted for four days here, and sounded like a war zone, beginning Friday night and not abating finally until Tuesday. Fireworks are illegal within the city limits, but that doesn't deter the enormous number of scofflaws who go out of town to buy their ammunition and then fire away. On Saturday and Sunday nights, the blasts went on unabated until well after one a.m. Despite ample public displays put on by municipal and other groups, people around here just can't seem to survive the 4th without blowing stuff up. I'm pretty sure they were all making up for not being able to celebrate amply last year, but I'll never be able to enjoy fireworks again, after four sleepless nights with two frightened animals.

Our little half acre was considerably quieter twenty years ago when we moved up from Dallas. That quiet has gradually been overwhelmed by new highway lanes and increasing construction in what has become just another suburb of Dallas. The only respite came during the early part of the pandemic, when things shut down for long enough that I actually could remember what it was like in our early years here. And perhaps some changes in modes of conducting business will provide a small measure of noise-dampening as we begin to work out how we're all going to live from now on.

It's quiet at the moment, though, and the back yard is lovely and shady. The temperature's a little higher (88F, with a high of 91 expected), but the humidity is down to 56%--quite tolerable with the little 6 mph breeze going on. Time to stop whinging and enjoy the now-tolerable, rather peaceful late morning in summertime Texas.

The opening photo was taken last year at this time, and shows just about how much sky we can see from most of the yard. The leafy canopy makes it difficult to grow food, but it does help keep the soil cool and the house shaded--which is about as good as it gets in July. I just wish all these trees were better at dampening the acoustical contributions of suburban life.

I'm one of the few people in our neighborhood who mows my own yard. I know exactly what you are talking about. The guys showing up and mowing, trimming, blowing, and going on forever. A hard way to make a living and I respect them for it but it sure does cause a ruckus.

I have the same issues with gardners on my street (a bit less rural than your area). We have two guys that do almost all the homes on our street on Tuesday afternoon (when the trash gets hauled out curbside). From house to house, leaf blower blowing furiously... time to close our windows. I think I'm that last holdout on the street that does my own gardening. Wow, been a long time since I've listened to Blond on Blond, but I'm sure I have it on vinyl here in the house somewhere.

goodness where to start? what's the point of a garden if you don't have a relationship with it? Lawns are such an ecological disaster anyway - monoculture, use too much water, support nothing in the way of wildlife...My bro tells me there is some place (I think it was in Arizona) where the residents are paid to take their yards out of lawn and plant up local flora. He has acres of lawn himself in NZ, but is gradually changing that and encouraging it to become mixed species meadow (and that from a guy who used to make his living growing grass to be 'ready-lawn' instant lawns around town homes). You have our sympathies in the hearing loss - yes there are delights to enjoy when the world goes quiet enough to hear them, but urban soundscapes are such that it seldom goes quiet. I live in a place where no one cars about the noise levels and it seems that the louder they can be the better they identify themselves as part of the local culture. LOUD is who and what they are and it knows no time limits either - 4am is when the truck comes round to empty the bottle bank bins on the corner, street sweeping is in the 'small hours', cars go by sounding like mobile nightclubs....