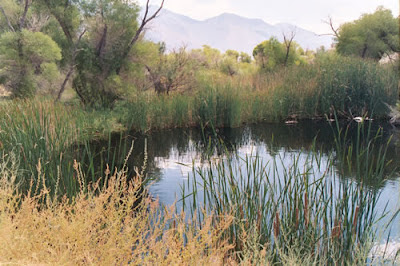 Photo: The Owens River, near Lone Pine, California. Taken before the City of Los Angeles began to release water into the river to help reduce air pollution in the Owens valley.

I was going to write about mining this week, in response to recent events in Utah, but this morning I came across Verlyn Klinkenborg’s short essay in the New York Times (“The 17 Percent Problem and the Perils of Domestication”) about a recent article in Science concerning the disappearance of wilderness. The original article (“Domesticated Nature” in the June 29 issue; it’s available in .pdf format here if you don’t have a subscription to Science) was co-authored by the Nature Conservancy’s Peter Kareiva—who’s interviewed on the topic at the organization’s own website.

The notion that human beings have so intensively penetrated the fabric of nature that little exists untouched by our influence isn't new; Wilhelm Dilthey coined the term "mind affected world" in the nineteenth century to describe this situation as he saw it then, and I remember college anthropology classes in which Dilthey's philosophy formed a core component. After class we would debate the future of human impact on the environment, often over pitchers of beer, with fellow students in physics and geology. Those were heady days, when we thought that there might be a possibility of mitigating that impact in some way, by limiting population, reining in technology (all this was, after all, taking place in the seventies, amidst the "energy crisis" and lines at the gas pump), or otherwise learning how to interact with nature rather than simply to dominate it. But I am now much more skeptical, as is Klinkenborg, because the human track record is so abysmally bad in this regard. Our very intelligence might, in fact, be our most substantial stumbling block--as Kurt Vonnegut posited in his novel, Galápagos. Our big brains are what get us into trouble.

Our big brains and our small imaginations. Human beings are metaphor makers (homo translator, I call us). We see the world in terms of other things--what we know, the familiar. We can't learn anything except through experience (ours or someone else's), and that experience provides us with metaphors (examples, analogies, patterns, models) that help us decide how to proceed. We're not quite as circumscribed as the Tamarians in the old Star Trek: The Next Generation episode, "Darmok" (used with great glee by those of us who teach about metaphor), because we don't have to have stories on which to base all of our thought processes, but we do require a certain richness of experience in order to be able to think creatively. As Klinkenborg points out in his essay, the very metaphor at the heart of domestication (making the earth our home--domus, in Latin), may itself be the problem. If we see our role on this planet as one of home-making (for us), we compromise the experiences of all the other occupants of the planet--animal, vegetable, mineral--and thus diminish our own. What makes our home comfy comes at the expense of other beings and their homes. Even some of the most evocative words we use to write about nature (ecology, ecosystem) and about how we earn our livings (economics) are grounded in the Greek word for home: oikos.

The Science article quantifies the effects of millennia of human efforts to make earth homey, and describes the processes and impulses that drove us to the present situation--beginning with efforts of early peoples to secure their own safety and food supply. The authors then go on to paint a pretty bleak picture of future interactions (mostly in terms of "tradeoffs": what we give up in order to achieve the level of domestic wealth we now enjoy). Leaving out the question of global warming/climate change, much of what we're seeing in nature (blight in monoculture forests, subsequent wildfires, flooding along leveed rivers, etc.) can be traced to those very tradeoffs. And while I think Kareiva, et al, do a laudable job of describing current conditions, my blood chills when I read passages like this: "The key scientific goals for the study of domesticated nature are to understand what tradeoffs exist between the promotion or selection of different ecosystem services and to determine to what extent we can change a negative tradeoff to a positive one by altering the details of our domestication process" (second to last paragraph).

We are in the habit of referring cavalierly to "natural resources"--as if nature were simply a repository dedicated to the material fulfillment of perceived human needs. (Don't get me started on the use of the term "human resources" for what used to be called "personnel.") Add to this the utterly mechanical notion of "ecosystem services" and the underlying metaphor is laid bare: the earth is a commissary, where human beings line up to acquire "resources" and "services" made available for their use. We have bigger brains, we have machines, we want stuff, so we can decide how and whether or not every other species gets to live.

Maybe the only hope we have is to stop trying to figure out how we can make nature do our bidding and start thinking more about what we really need and what we can do without. But we're not likely to do much self -examination when we're not even aware of how deeply we have altered the entire planet. I'll end with an example drawn from the first exercise I assign to my first-quarter History of Art and Design students. I ask them to locate an image of a natural object, one as little affected by human agency as possible--not, for instance, a picture of a domesticated cat; a tiger or a lion instead. But even after I explain the assignment to them (they are to create an image that reflects what the reference picture evokes), and what I mean by "mind-affected," the results can be dismaying. Reference images frequently include animals in a zoo, or a shot of an American Bison, a dog chained in a back yard, clearly artificial images, and (this quarter) even a boom box! It becomes more difficult every year to remove the veils of technology from over their eyes, and to get them to think carefully about the fact that there isn't a single object within miles of the campus that hasn't been directly impacted by human existence. Kareiva and the others acknowledge this condition, noting that the "choices and actions of urban dwellers influence nature far removed from cities, yet urban dwellers are increasingly unaware of these impacts." Nonetheless, they seem far more sanguine than many of us are about the possibility of improving the situation through conscious human actions. The fewer natural models we have, the fewer metaphors we have to inform our decisions. And without better metaphors, we simply have no way to use these big brains imaginatively enough to foster meaningful change.

The ghost of Kurt Vonnegut, as it haunts the decks of the Bahía de Darwin, has got to be chortling over this latest evidence that our big brains have doomed us.