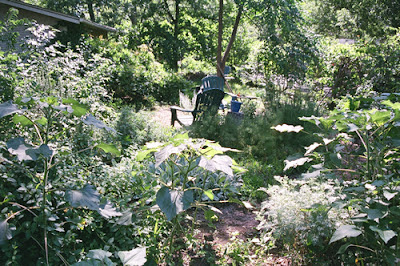 It’s easy, as we move into fall around here, and the temperatures stay reasonably moderate throughout the day, to forget summer’s heat. That is, until I go out into my “garden” to see how it’s fared over the long, dry spell. The spent tomato plants (almost the only thing I planted this year), and withered grasses, along with the stalks of volunteer sunflowers and horse parsley, remind me all too vividly that I’ve fallen into my usual pattern: great ambition in the spring, before the mosquitoes arrive, followed by a gradual, but relentless easing off. It’s pretty much all over when I can’t go out without insect repellant, because I won’t use the nasty stuff full of DEET, and the effectiveness of the herbal versions depends on how awful they smell, and how long they cling to my skin. If I sweat off the stench, I get bitten, and so it’s hard not to just say “to hell with it” and come back in to the computer—or to read a book or magazine on gardening, and sigh in frustration.

Perhaps out of laziness, perhaps out of water-guilt, I’ve pretty much left the back eighth of our half-acre go its own way. I’m also waiting for the bearded iris border (planted by the previous owner, but much too attention-demanding for me) to die out so I can plant old-fashioned, heat-hardy, luscious-smelling hedge roses. The iris border was lovely at first, but too large and too needy. I’ve already given away tons of corms, and have noticed that the area is well-depleted now and nearly ready for digging up. Over the last two or three summers, a mullein plant has volunteered, and self-seeded nearby, so that about five plants occupy a formerly-plantless spot. I transplanted lambs’ ears there in the spring, so now I have a mini-garden of plants with soft, furry leaves—in case I ever decide to stop using toilet paper, I guess. A recent conversation on the Orion magazine website (responding to Nicole McClelland’s article, “Sitting Pretty”) reminded me that mullein is nature’s version of Cottonelle, and I haven’t been able to look at it without smiling since.

There’s something about letting grow what “wants” to that appeals to me. I’ve always been delighted by what comes in “on accident” (as my children used to say)—like the inkberry plants that pop up every year (and are on the increase because I don’t pull them out), with their delicate white flowers and pretty berries. The birds like them, and some day I’m going to try my hand at testing them for their reputed pigment qualities. In spring the volunteer honeysuckle takes over scenting the air as soon as the wisteria (now taking over the back fence) stops blooming. The centerpiece of the back garden is itself a volunteer: a 25-foot Chinaberry that grew from a seed pooped in by some berry-drunk bird about four summers ago. These are essentially trash trees, but I love their ferny leaves, purple flowers, and heady perfume. Of course, it’s now shading a good portion of what once was an herb garden, and the herbs have essentially departed. I’m going to have to plant a new area next to the car park, and put more thyme, oregano, and sage species into the front yard. I think that one reason I’ve let it go is to do penance for how it had been treated before I moved in.

Oddly enough, what sold me this house was the back garden. I remember my husband saying to the estate agent, “Don’t let her see this; it’s all over if she does” as soon as he stepped out the back door when we came to look. He was absolutely right, not just because there was a nice expanse of lawn and plentiful trees, but because there was also a compost bin and a fence laden with blackberries and grapes. At the rear of the garden stood a small peach tree, two figs, and plenty of room for veggies. The previous owners had set up poles and wire mesh supports for beans, but he had died and she was selling the house, so there was no garden that summer.

What I didn’t know then was that the “compost bin” was essentially an inaccessible receptacle for garden trash and Schnauzer droppings, the entire area had been nuked with insecticides and chemical fertilizers so thoroughly that nothing living came into the yard except for squirrels and sparrows. No worms, no butterflies, no bugs of any kind—except, of course, for mosquitoes and fire ants. We spent that summer getting rid of barbed wire from the fence, rebar rods from everywhere (I’m still not entirely sure what they were all used for), and trying to let the soil return to its natural state. By the next summer, I’d planted herbs and balloon flowers, and a few bugs made their way back in, along with an occasional rabbit or snake and a few toads. As if to thank me, the garden produced its first surprise: a basket flower, which I wisely let grow, even though it started out looking like a spiky weed. The original peach tree died, but was replaced by a volunteer, which is now bigger, and has better peaches, than the original.

Now, seven years later, the grapes have gone wild, and the blackberries have petered out (I did have about three years of plentiful growth) to be replaced (by Mother Nature) with mulberry, peach, box elder, pecan, hackberry, and assorted other treelings. Soon it will be time to thin them out a bit, but they provide a considerable amount of privacy, and with a modicum of training, will become a nice little private forest. I have plans for putting an old Shasta AirFlyte travel trailer back there to use as a guest-house, if I can ever find one. Or perhaps we could order a gypsy caravan from the Tumbleweed Tiny House people. But I do like the fact that I’m not in total control—that I’m doing my part to let nature “happen” when everything around us is planned and manicured and soaked with chemicals. I also like the fact that by letting things take a more natural path, I become more aware of natural processes, and stand a chance of learning from my own land—rather than completely imposing my own will on it.

During periods of drought, it makes sense to me to let grow what can grow, and then plant things we can eat in places that make it easy to water sparingly. Even hedge roses grow hips, and that means jam, and a useful garden seems philosophically preferable to a merely ornamental one. In addition, the more accidents I allow, the more I leave myself open to surprise. I wouldn’t mind another basket flower, but the mullein wasn’t a bad substitute. A little nature-affected mind seems to be a nice antidote to an already too-heavily mind-affected nature.