Adventures in Rehab: Or, The Recycled House, Part 2 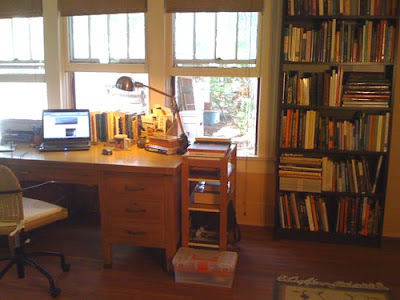 Have I mentioned that I'm getting old? If I had ever doubted the fact, or had ever held on to illusions of my eternal youth (don't we all feel 16 somewhere in our psyches?), I am now fully disabused of them.

After two weeks of down-on-knees and up-on-ladder efforts, we finally finished (more or less) one of the two rooms we had planned to complete over my two-week break from teaching and prep. On Monday, a new quarter begins for me, and Beloved Spouse begins a five-week stint of teaching two summer session classes, and we won't have much time for these shenanigans.

But we will have a nice, sunny (read: warm) study, with newly refinished floors, newly painted walls and baseboards, and newly installed and painted crown molding. Still to complete: the former study/potential guest room (or Sitting Room, as he wants to call it), which still needs all of the above done to it, except for installing crown molding. 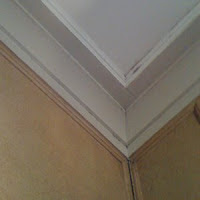 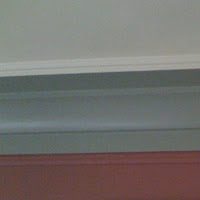 The necessity for all the fixing-up stems from a really bad job of updating begun by the previous owners, but never completed. Extensive work had been done on the living and dining rooms (glazing the beaver-board walls, stuccoing the fireplace, and installing gold shag carpeting throughout), but somebody decided to take out the beaver-board in the rest of the house and install wallboard--badly. They never seem to have finished it out, and the taping and bedding that was done, was carried out haphazardly and incompletely. I'm not sure when this all happened (evidence suggests that the glazing and carpeting was a '70s effort, but the rest may have happened later). The photos above are of the crown molding on top of the glazed beaver-board in the living room, contrasted with the equivalents in the re-painted dining room (accomplished a couple of years ago, before we installed a wall of bookcases in there). The living room re-do will involve somebody who knows what he or she is doing, because the ceiling panels are damaged and/or sagging, and will require professional help.

At any rate, we set aside two weeks to shift our lives around a bit, and to take care of problems that had been bugging us since we moved in. We began by sanding the floors in what we have been calling the sunroom (because it's at the southwest corner of the house, with expanses of windows in both those directions). The red pine had originally been varnished, but the '70s up-dating had included the removal of the shoe-molding, the laying down of crappy carpet pads, and the installation of the shag carpet. The first thing we did when we moved into the house was to rip up all of the carpeting everywhere (including the astroturf on the front porch!) and strip the varnish from the floors in the living and dining rooms. We threw down rugs everywhere else, planning to get to it all eventually. 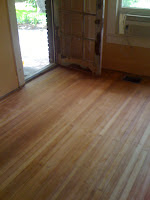 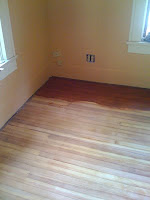 What we forgot is that we're now eight years older than we were when we moved in, and the weather is not exactly cool. Nonetheless, we rented sanders (which helped, but not as much as we had hoped), bought spackling compound and molding and paint, and got to work. What the drum-sander didn't get, we removed with citrus stripper and hand-sanding, and then we went on the Great Floor-Finish Hunt, which became a problem because we were running out of time and our options were narrowing. We settled on Velvit Oil, a penetrating wood stain that binds with the wood molecules and seals the floor. Thus began a three-day ordeal, which left me with blisters on my knees and the worst back ache I've ever had. But the floor looks pretty good, and nicely rustic (we didn't apply anything to make it shiny, but it is smooth, and there are no traces of the rug padding). It's a rich deep red color (the result of blending a light blond shade with a cherry) that's satisfying enough to use on the hallway and in the breakfast room, when we finally undertake those. 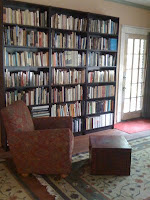 We had to re-think our original plans for where the Ikea "Billy" bookcases would go, but what we ended up with avoided our having to saw holes in the backing to accommodate light switches. We need to put in another one where the TV is still ensconced (until we can get the cable switched--something that can't happen until the other room is finished). But after moving a thousand books (I'm not exaggerating) into the room, along with two desks, we're pretty happy with how it turned out. The few changes left can wait, and we'll be taking it much more slowly from here on in.

I have to wait until my knees heal, and I can walk fully upright again. But now I can sit here at my desk and watch the squirrels run around the pecan tree outside the west window, and enjoy the cool morning breeze. Life in an old house can be really good--if you're not too old to make it work.

Photos: View of my view from my desk; living room and dining room crown molding contrasted; study floor stripped (left) and being stained (right); east wall bookcase view (see The Recycled House post for "before").
Posted by Owlfarmer at 9:36 AM

Hey, thanks for stopping by...I can totally identify with the pains. I am stripping 5 layers of paint off my kitchen floor. I can barely move this morning and at our age (almost 59)...IT SUCKS. But we sure got some cool memories aye.

I thought that two rooms seemed ambitious! I was going to feel like a lazy slob if you had managed to pull it off in just two short weeks, especially considering the extent of the work you were undertaking. I can hardly imagine your beautiful old house with shag carpeting - ugh.

The room you finished looks great!

awww! aweeesome!and a thousand books. what can be better?