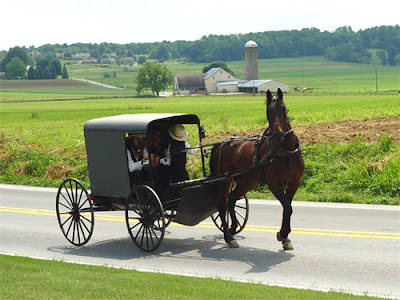 There are plenty of reasons to admire the Amish, not the least of which has to do with their sense of community and responsibility toward one another. But last week's ice storm in Kentucky brought out other reasons: self-reliance and the ability to get by using only a modicum of technology. Add to that their willingness to assist their less self-reliant "modern" neighbors, and you have a model for how we should treat one another, and perhaps our planet.

Most of you know that I'm not of a religious bent. I'm highly skeptical regarding things spiritual, and am an innate materialist (what's here is here). But there are some religious sects for which I hold high regard, primarily because of what they do (or don't do) rather than because of what they say. In fact, I'm more than a little suspicious of folk who wax certain about what's going to happen to my heathen soul once I shuffle off, and who tell me how I should be livin' even whilst they don't practice what they themselves preach.

But the Amish live their creed, and they live it with a defiant simplicity that holds lessons for us all as we teeter on the brink of technological overload. The most admirable aspect of Amish life has to do with practice--with the doing of community, and their refusal to buy into technological determinism. Just because it's there, they say collectively, doesn't mean we have to adopt it.

And since most of the rest of us have latched on to every technological gimcrack that's come along in the last fifty years, one can imagine the impact of this scenario:

Hundreds of thousands of people in Kentucky have been without electricity for their lights, furnaces, ovens and refrigerators since the killer storm hit more than a week ago, and some spots might not get power back for weeks. (From the AP article printed on MSNBC)

Not to mention the microwave, the big-screen TV, the Wii, and the security system. The computer and phone can run on batteries until they wear out, so I guess what you save on electricity you can use to buy batteries.

Of course, the Amish do rely on fossil fuels (kerosene) for some of their lighting needs, but otherwise they tend to be fairly self-sufficient, growing most of what they need for fuel and food. And although they do buy cloth for making their own clothing, and may actually buy stuff to add to their larders, if they had to they could do without that, too.

I pretty much doubt that the rest of us could.

But, they're also not content to sit back and gloat in the glow of their fireplaces on cold winter nights. Instead,

When the wind died down and the ice storm had passed, Joe Stutzman gathered his spare lanterns and stepped out of his Amish farmhouse to lend them to his modern-living neighbors. "I feel sorry for my neighbors who were used to electricity and all of a sudden didn't have it," Stutzman said. "I know that must be hard for them."

No kidding. And these nice folks also supplied hot coffee to their neighbors every morning until the lights came back on. 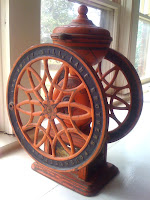 The story certainly made me appreciate my old timey coffee grinder, and the woodpile out back, and reminded me that it might be a good idea to check out the camping equipment (which includes a little propane stove) every now and then. Even though I've got a duel-fuel range (the ovens are electric, but the stove itself is gas), it probably wouldn't light if the electricity were off; nor would the furnace. We could probably snuggle up with the cats and dogs to keep warm enough, and there is the fireplace, but the coffee would be a problem.

The electric coffee grinder would be useless, and so would the coffeemaker. But I could heat water on the camp stove, and I've got an old two-cup Chemex and a four-cup Melitta cone that fits over almost anything. There's also a stash of filters in the pantry, because we use the Melitta on camping trips.

We've probably had our last ice storm of the year, and didn't even lose power at all. But if we did, we don't have any Amish neighbors to bring us coffee, and even here in the historic part of town, most folks are even less self-sufficient than we are.

So my next experiment in doing without might be to pitch the Cuisinart and go back to using the Chemex; there's something more thoughtful about grinding coffee by hand, and very deliberately pouring hot water through the grounds and watching the brew emerge through the glass. Not only that, it tastes better.

Too bad we can't grow our own beans here. For as long as I stay addicted to this most savory of brews, I am a slave to the technologies that get it the raw ingredients to me--no matter how good I might be at doing without fancier ways of making it.

Images: Lancaster County, Pennsylvania Amish couple in their buggy from Wikimedia Commons, and my grandmother's Swift Mill coffee grinder--which still works beautifully and looks pretty nifty, too.
Posted by Owlfarmer at 9:27 AM

There was this sale on wine so I bought two bottles. I drank half of one and somehow misplaced the dvd remote. Now I've spent the last hour and a half trying to figure out where it is and I don't know how to stop the movie.

My weekend is ruined now.

Thank goodness for wine and books.

There's always the plug . . . Since we now have four remotes that control various video devices and their audio augments, I've given up trying to figure out how to use them. So when OwlSpouse/Tennis Boy is out of town (as he has been since Friday morning), I have to resort to . . . wine and books.

A month ago we had a power outage in the middle of supper preparations for a houseful of friends. Dinner in the electric oven was half cooked. Bingo, bango, some schmuck hit a neighbour's power pole and we lost power for two hours at the crucial point of dinner making. My neighbour, Looking for Beauty walked over with her flashlight. I organised our kerosene lanterns and some candles and we had some light to sit by. Other guests were to arrive within the hour. I uncorked the wine, put out some brie and french bread and some olives, and Looking for Beauty and I sat and sang songs from our dissolute youth. By the time power came back on we had determined a list of top ten songs, blasts from the past, which we would insist on listening to in the Old Folks Home, coming to both of us sooner than later. You know, Owl, it seems that our voices reached a broader range with a couple of glasses of good red. We were in agreement that without technology there is a greater impetus for co-operative behaviour, and this includes entertainment as well.
I think also, in the absence of a hand mill for grinding coffee, a mortar and pestle, or a metate and mano might work just as well, if not being a bit more laborious. I have my trusty mortar and pestle for such emergencies ( and camping stoves in good repair). GEM

This comes under the category, I think, of keeping one's feathers numbered for just such an occasion (I can, when drunk enough, do a passable imitation of Foghorn Leghorn here).

Thanks for the lovely story, G--I'm inspired to make a greater effort to go back to gathering friends on a regular basis. It's good to have chums like LFB nearby, and one forgets just how much affable company with simple food can provide.

Your account also reminds me that we just don't sing enough any more. For a long time, in our early years of teaching, Owlspouse and I met regularly with friends--one of whom was a musician who always brought along a backstrap guitar, and we'd almost always end up singing songs from our misspent youths (since most of us were already in our forties). You've inspired me to rekindle that old flame, in the name of community and nostalgia.

You sound reasonable self reliant, yet I wonder you have no matches to light your stove in an emergency. During an ice storm in Montreal years ago, my mother-in-law kept her house tenable by running her gas stove full tilt.
Having survived WWII, fled the Russians, survived the worst of the war (from Aug.'44) in Germany and emigrated to Australia, allwith just what we could carry, and after 25 yrs. of marriage having fire destroy all we had earned, we know that no matter what, we can bounce back again. We grow most of our food and at a pinch could grow all of it, I can spin, weave, knit cetchet and sew so clothing and bedding is no problem, we can buils a shelter with minimal tools and materials and I can make clay cooking pots.
I feel somewhere in the future self reliace will again have to come to the fore so I have passed down most of my skills to my granddaughters as well.

Thanks for the reminder, Arija. One wants to say "Duh!" or something equivalently silly because the idea of lighting the bloody burners with a match never even occurred to me!

I hope you and yours are doing well despite all the upheaval caused by the fires. I've been thinking about you since your own 11 February post with the photo of the fire-enhanced sunset. Glad to see you're back posting about flowers!

Perhaps we should all take stock of our skills (I can still sew, and have my grandmother's old treadle sewing machine to use if the lights go off), and build on them to enhance our ability to take care of ourselves. Sounds like a good topic to discuss on the Farm at some point.