The Reader in the Garden 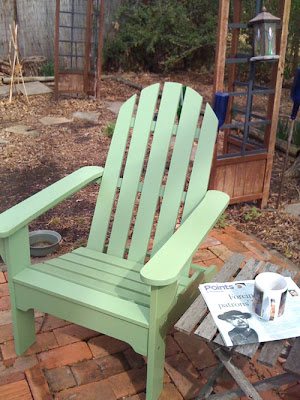 There's currently something of a stew about the future of newspapers (and see this article in The Economist), but this morning I realized just what I would miss if even our local rag were to disappear.

Due to other preoccupations yesterday, I failed to read the "Points" section of the Sunday Dallas Morning News. But since I actually remembered that I'd forgotten to read it, I pulled it out of the recycle bin this morning to catch up, and took it out with me to the garden to enjoy in the unusually clement weather apparently caused by global warming. Since I've been blogging, this has been my favorite section of the paper, because it frequently brings me new items about which to get my dander up, and keeps me apprised of both local and national opinions on matters both great and small.

And so it is that I came upon an especially relevant essay, "Hard Compromise for a Rural Jew," and an even more relevant blog: Casaubon's Book. Mind you, I might well have tripped over the blog in my travels around the web, and been attracted by its intriguing title (George Eliot's Middlemarch is one of the books I read young and that literally--in the literary sense--changed my life), not even knowing about its focus: oikos. As its author, Sharon Astyk, notes,

The problem isn't just the economy, or our energy use, or global warming - or rather, they are all part of the same larger problem.

The overall content is focused on some of the same things that get ranted about here on the Farm (and occasionally on the Cabinet), but she's been at it a lot longer (since 2004), and she's a real farmer (in upstate New York), and a real Jew (as opposed to whatever I now am), and an actual published writer. Her aim, like mine, however, is tikkun olam, and she writes about how to do it.

In the article (an adaptation of a blog post) Astyk discusses the difficulties of being an observant Jew who lives in rural New York in order to farm. Now, since Jews are by nature community-bound folk (she points out that Jewish practice requires others--a minyan is needed for almost everything important), the fact that she has to drive thirty minutes on Shabbat to get to a synagogue requires a compromise she's not comfortable with. In fact, this is why it's harder to be Jewish than it is to be Amish, because the Amish are still a farming people, whereas Jews (who were once a farming people) have all moved to cities and suburbs. Over millennia, in fact, Jews have systematically been deprived of farms, making them especially leery of investing their wealth in land--either that or it has driven them to see owning land in Palestine as a divine right and causing a rather ironic set of problems.

Astyk's blog is erudite, wide-ranging, literate, and funny. The article reprinted in the News doesn't let on that she's also a Peak Oil activist--which might lead some readers to think she's some kind of apocalyptic nut. But she's no nuttier than Mormons who keep a year's supply of food in their pantries, or than anyone who wants to be as self-sufficient as possible, and her advice on gardening and storing food is fun to read and highly instructive. In fact, I plan on reading her garden design posts rather seriously to help me overcome some of the problems I've been wrestling with over the years. I don't have a farm, but I would really like to make the part of my garden that isn't consciously accidental (is that an oxymoron?) more productive than it has been in the past.

The trouble with reading the newspaper in the first place (and watching the increasingly pessimistic economic news on the telly) is that the Peak Oil people make more sense every day, especially as some of their predictions begin to pan out. I've been aware of oil reserve depletion since I heard King Hubbert speak to geology students at Penn back in the seventies, and have never been convinced that he was being overly pessimistic. Regardless of whether these folks are right or wrong, however, Astyk's discussions on how to preserve and store food, how to grow it in the first place, and how to preserve community at the very least offer an anodyne during times of economic confusion and discomfort. Her practical advice also makes a great deal more sense than the "ten things you can do to save the earth" remedies.

To top it off, she also considers the conundrum faced by print news, especially papers that also host free online editions: Why Buy the Cow When I’m Giving Milk Away for Free? The Problem of Newspapers (and includes in her consideration those of us who publish online for free).

In parting, I'll add to the problem by posting a link to the list of 2008's ten best online newspapers, according to the Bivings Report. The Dallas Morning News wasn't on the list (with good reason, since the Points section and the funnies are its best parts even in print, and the online version is difficult to navigate, to put it kindly)--but my other morning (online) paper was #1: The New York Times.
Posted by Owlfarmer at 10:13 AM