Gardeners and Tailors and Cobblers, Oh My!

Today's news of record-setting stock-market plunging and the looming expectation of further financial crisis is enough to curdle the organic milk in one's sustainably-raised breakfast cereal.

But all the news that's fit to print isn't necessarily glum, and encouraging bits keep popping out at me. More and more people who think like I do (and are a great deal more vocal than I am) are coming to national attention--like our favorite local Crunchy Con, Rod Dreher, and writer/blogger Sharon Astyk (whom Dreher mentions in his piece in Sunday's Dallas Morning News).

Dreher argues for creating urban garden-friendly zoning laws to enable more folks to grow their own, even though nobody really expects suburbanites in gated communities to be able to feed themselves entirely. Kitchen gardens tucked away amongst the pricey landscaping (which some are probably already having to care for themselves, rather than hiring out the weekly grooming) probably don't need zoning laws. But raising a few chickens (I'd suggest guinea pigs, too, like Peruvians and Guatemalans, and the self-sustaining characters in Ursula Le Guin's Always Coming Home raise for food, but that would probably cause tears among the kiddos), at least for eggs, and expanding the food-garden into the front yard will require some political discussion.

Here in McKinney, on my half-acre lot, I'm allowed to keep no more than twelve chickens, rabbits, or guinea pigs (I guess the city actually recognizes their nutritional value)--but I can't keep ducks (unless they fly into my pond, should I ever build a pond) or geese or pea-fowl. I'm not sure why they exclude these, except that peacocks are noisy bloody animals. Geese make great watchdogs and, if you're bothered by cobras, their droppings keep those away. But I haven't seen a cobra in many years, and never around here, so I can live without geese, even though I've had very close geese-friends in the past. And since Biscuit died, we're actually down to the legal limit of cats and dogs. It's comforting to be on the correct side of the law at last--although I'd gladly continue to be a scofflaw if I could have him back.

I'm currently busy trying to convince Beloved Spouse to help me build a hen house--so far with no luck. When I was growing up in Taiwan, we always had baby chicks incubating or hopping around being cute, and I came to think of fresh eggs as my birthright. But it's less cute when the dogs get the chickens, which is what probably concerns Beloved Spouse. He's had to pry one too many cats and squirrels out of the mouths of the Guthrie brothers, Woody and Arlo, and their oversized "uncle" Homer.

We don't have a homeowners association here in the Historic District, partly because there's such a vast range of houses, from the sublime to the ridiculous, and we're governed by another set of rules. So as long as any gardening I do in front of the house doesn't offend anyone, I don't think I'll get in trouble for growing a few veg on the verge. I'm actually only thinking of mint species there, because people let their dogs poop on it, and even though they're getting better about picking up after their pooches, I'm not eating anything grown with that particular kind of organic fertilizer. But mint spreads fast, smells nice when you walk on it, and needs little care. 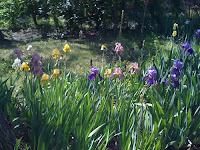 Up on the lawn, however, I'll be expanding my food growing area to some of the spaces adjacent to the driveway, because I need more sunlight for some of the stuff I want to grow. I'm thinking of a nice Japanese bamboo fence to screen part of it and to support tomato and bean plants, but I think this will be the last year for the iris collection I inherited from the previous owner. As soon as I'm up to heavy-duty gardening again, a large swath of the back yard will also become arable, and I'll transplant the St. Augustine grass to a shadier section. The Accidental Garden is well on its way to becoming the Purposeful Forest, and the only planted bits still growing in there are oregano and perhaps a little thyme (not yet visible). I'd rather that it be devoted to woodland plants that sneak in.

If more people could garden more of their yards, and even if more people learned how to keep up a few pots of tomatoes and peppers on the patio, I can't help but think that we'd become wiser about the way the world works. A couple of chickens (legal in many Dallas neighborhoods) would mean fresh eggs and nature lessons for children. Victory gardens really do need to make a comeback. 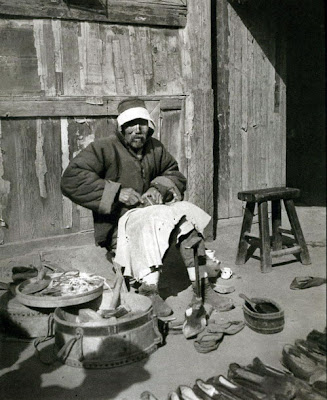 Another encouraging story appeared in today's News, and points to an alternative to the wasteful consumer-focused economy we've become used to. Mark Norris's article, "Forget New Threads, Let's Fix the Old Ones" (I'm assuming that he wasn't responsible for the comma splice--and anyway, the title on the link is different) notes that the old standby professions--tailors and cobblers, as well as alteration shops--are booming these days. As people decide that getting worn heels replaced (which we always did when I was young) costs much less than buying a new pair of shoes, perhaps they'll begin to understand that it's also much less wasteful and uses fewer resources. Just last week my five-year-old puppies decided that my new pair of comfy shoes were a chew toy and gnawed a hole in one of them. My daughter, thriftily-raised as she was, thought that I could patch the tear and add a matching patch on the other shoe rather than hustling down to Rack Room for yet another pair (I had previously melted the bottoms of identical shoes when I unwisely rested their soles on the edge of the copper fire-pit on the back patio one calm winter night when we were enjoying an outdoor fire). And so I will, even though I may have to consult a cobbler.

What's encouraging about these recession-driven instances of real economy is that traditional crafts seem to be making a comeback. Of course there have always been housewives (I can use this word because I really was a housewife at one time) who made their children's clothes, recovered their own sofas, and fabricated window coverings to keep their houses warm. But if gas prices rise again, and people stay home more, even working folk might find time to do for themselves and learn skills their grandparents--and maybe even their parents--were expected to know.

Perhaps we'll even reach a balance at some point: where old professions enjoy a renaissance in a new economy fueled less by greed and detachment from traditional activities (like cooking, gardening, and home-keeping) and more by appreciation for nature's gifts and the use of our hands as well as our brains. It's not that I want the computer age to go away; it's just that I want to see it tempered by an appreciation for what our bodies can do. I can't help but think we'll end up the wiser and the healthier for it.

Images: Tailor from Das Ständebuch (The Book of Trades), 1568, and a cobbler in old Beijing, from Peking Studies (1934) by Ellen Catleen. Both from Wikimedia Commons. The iris shot is from last spring, and has probably appeared on the Farm before.

Posted by Owlfarmer at 8:32 AM

I'm with you--bring back the Victory Garden! (My husband and I live in a condo, so right now about the only thing we're growing are sprouts, but I like the idea).

I was wondering just the other day if the recession will encourage people to make higher quality products, since right now people can't really afford to buy new clothing and accessories every ten minutes. I certainly hope that the economic downturn makes people more mindful of the real cost of badly made goods.