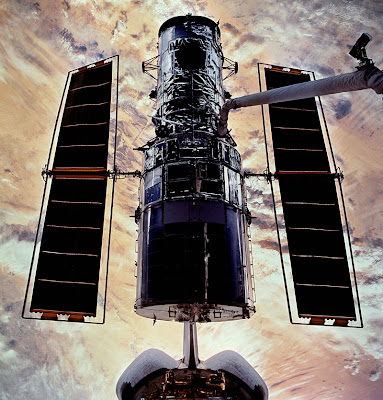 I won't be submitting a Skywatch Friday post today, because the best sky news of all is going on above us for the next few days, and I want to focus on the final mission to repair the Hubble Space Telescope. This single instrument, during its fifteen year active lifetime, has been responsible for the most incredible space photos ever made.

As I type this post, Astronauts John Grunsfeld and Andrew Feustel are well into the first of five EVAs whose sole purpose is to repair the aging telescope so that we can all enjoy another five or more years of even more spectacular photos of our universe.

I've been following this mission like a junkie, unable to get enough of it. Thanks to NASA, there's a live feed so we earthbound voyeurs can enjoy vicariously all the hard work these guys are doing. I lament that I no longer have NASA TV live on my fancy HD setup (which, at the moment is showing the Sunrise Earth segment filmed at Haleakala Crater on Maui--this is as close as I get to multitasking, but I'm also a Sunrise Earth junkie). Listening to two guys talk about spanners and bolts (one of them restores antique cars as a hobby) whilst hurtling across the sky is about as good as it gets for me, so I'm happy just to see what's going on.

Surely I've mentioned before that in 1957 (the year Sputnik was launched and the Space Age really began) I was watching a Science Fiction Theater program with my father. I have no idea what the show was about, but there were satellites involved, and he casually mentioned that one day the sky would be full of those things. Years later, I spent many a night sitting on the front porch of my grandmother's house, watching for satellites in the night sky over the Owens Valley, where you can still see the Milky Way spread out diagonally like a canopy of stars across the valley. A couple of years after I saw the program, I discovered literary science fiction, in the form of Robert Heinlein's Red Planet and Wilmar Shiras's Children of the Atom, which I checked out of the base library where my father worked in Taiwan. Only recently I found an antique copy of the Heinlein book, complete with the illustrations I remembered, at Half Price Books, and reread it enthusiastically.

Ever since my first encounters with "outer space" as we used to call it, I've been fascinated by what's out there. I'd have loved to have been an astronaut, but girls of my generation were still being discouraged from taking maths and science in school, and it would be quite a while before Sally Ride would make her way into space. I took astronomy and geology courses in college and grad school so I could better understand things like planet formation and stellar systems. Even in my teens and twenties I wanted to understand as much as I could about where we live, and how it got to be the way it is. As my academic interests shifted toward archaeology, I became fascinated with how previous cultures had understood their place in the universe.

What disturbs me now is how little interest there seems to be in what's going on right over our heads, right this minute. Comments on a science fiction focused forum I frequent (try saying that fast three times!) tend to reflect not wonder or excitement, but rather "meh." It's as if the real thing isn't exciting enough, and the forum members prefer fantasy over reality. I do wonder how they think all those future space travelers would have gotten out there in the first place, however.

Perhaps Hubble has done its job too well. Years ago I bought a set of 35 mm slides called "The Universe" which included shots of planets, moons, and galaxies, in resolutions that seem dismal by today's standards. The difference is like that between Daguerreotypes and modern digital photography, or between old black and white television and Blu-ray HD. Hubble's images have made us gasp with their clarity and detail, and have expanded our understanding of what's out there immeasurably. One can only imagine what the new camera being installed during STS 125's repair and upgrade mission will provide. Will the new images help boost the interest of a visually spoiled generation?

As I listen to the comments and conversations going on during the EVA, it's clear that the astronauts themselves haven't lost their sense of wonder. They always seem to be aware of how singular their experience is, and frequently voice their appreciation of it. Even mundane remarks like "this is lighter than it was in the pool" give us some insight into what it might be like to be up there, doing that, after years of simulation training.

Galileo and other early astronomers helped us understand just how small our little corner of the universe is; some of them suffered mightily for having forced us to change our view of humanity's importance in the big picture. Hubble, in taking its brilliant images of the outer reaches of our universe, somehow manages not to make our place seem even smaller, but to remind us of just how remarkable our little home is: one special speck in a vast panorama of stars, galaxies--and it seems increasingly probable--other planets not so different from ours, perhaps inhabited with heretofore unimaginable forms of life. If the newly configured Hubble helps spark some appreciation in new generations of youngsters, perhaps we'll eventually travel to some of these places. It's a dream many of us have held for a long time, and it's an idea that spawned the entire science fiction industry as we've come to know it.

Since SF films and television shows have depended so heavily on imagery made possible by Hubble's previous camera, the newest iteration, Wide Field Planetary Camera 3, (but for more information, primarily technical, see the Space Telescope Science Institute page on the WFPC3) should provide even better views and keep background animators busy for several years. So far, nothing artists have been able to imagine have proved any more impressive than the real thing.

The improvements put in place in 1993 were pretty remarkable and really dramatic (because WFPC2 has done such a good job, it's hard to imagine how things could get better, but we should see the results fairly soon, perhaps by September 9th. For a comparison of the original shots and the difference after repairs, here's NASA's example: 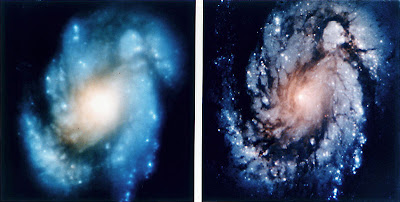 The human imagination is wondrous. It's given us several thousand years of technological innovations, and the WFPC3 is only the latest of these. As the Shuttle program winds down and new projects take its place, we can look forward to some pretty impressive NASA missions, as well as to contributions from private enterprises. Anyone looking for investment opportunities in a changing economy would do well to look toward these ventures. I can't think of a better stimulus package than one that stimulates imagination and creativity, and inspires today's kids to see science as something much more exciting than just another course to pass on the way to becoming a stock broker.

To celebrate the retirement of WFPC2, here's one of the last images distributed; it's available on the HubbleSite gallery and depicts planetary nebula Kohoutek 4-55. It's hard to imagine that things could get much better, but we'll see, come September. 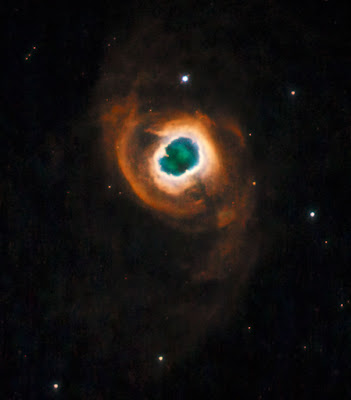 Photo credits: Except for the last image, everything is, as usual, from Wikipedia. The ones I've used are linked to the appropriate articles.
Posted by Owlfarmer at 3:01 PM