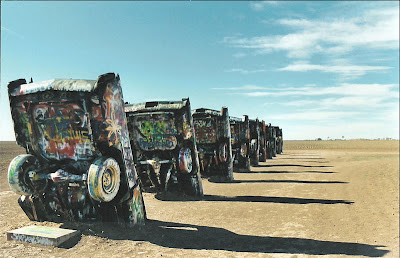 A few years ago, on a trip back to Texas from California, Beloved Spouse and I finally stopped along Interstate 40 near Amarillo to see the famous Cadillac Ranch.

This monument to human silliness and invention was put together by a group called Ant Farm and opened in 1974. When we saw it in 2004, the installation had already been moved two miles west from its original site, but it was still silly.

I had planned to paint "Art & Design Since 1945" on the cars, photograph the results, and use the image as the splash page for my course, but the wind was blowing about 70 mph, so there went that plan. I did, however, get several nice shots from various vantage points.

This particular photo is actually taken at the wrong angle for a good view of the cars themselves, since it shows the undercarriages; but the real focus of the shot is the West Texas sky that goes on forever--and provides a nice horizontal contrast to the more or less vertical position of the autos.

Like Heraclitus's river, you can't "step into" the same Cadillac Ranch twice. Abandoned cans of spray paint attest to the constant revision of the work, and the continuing fun folks have enjoying one of the best examples of early large-scale conceptual art in the United States.
Posted by Owlfarmer at 5:59 AM

I had heard of the Cadillac Ranch, but did not know that it was on ongoing project, with anybody being able to continue to "improve" it!

One of my favorite movies is "Paris, Texas" - same incredibly big skies!

Oh my! How extraordinary! It's good, though, that the old wrecks have been put to some use. The sky is wonderful - isn't everything in Texas bigger than anything anywhere else?

What an interesting sight. I can hardly wait to stop and see it on our next trip in that direction!