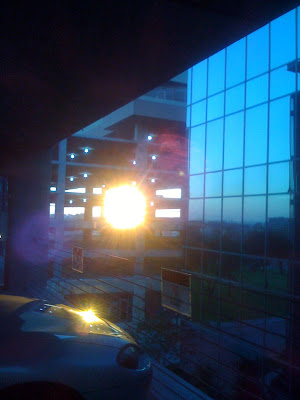 Now that we've enjoyed pleasant weather for over a week, I'm beginning to buck up a bit. My good camera is still in its bag, though, so I've had to rely on the iPhone and more "drive-by" shots when interesting stuff appears spontaneously.

This week's opening photo was taken yesterday morning at 7 am CST just after I got to school for my 8 am class. The sun appeared rather dramatically, peeking through the new student parking garage (it was taken from the old one, where faculty members still park). But because my 2 mp resolution is so crappy, the sun looks like a blazing fireball coming at me. Still, I thought it was fun, especially since the early-morning sky is also reflected in the building windows.

The second image was taken on the first really sunny day after weeks of rain, in the same parking garage, but on the sixth floor, looking up the ramp to the roof spaces. The Simpsons theme song was going through my head as I shot it. 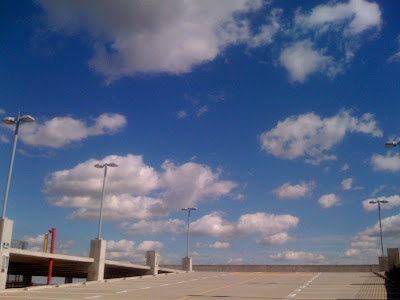 The day before that, the weather had started to break, and I should have had the Nikon with me to capture the incredible skies that followed me home. As it was, I only got one chance, through the car window at a stoplight. 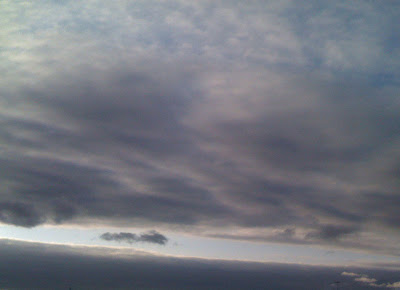 On Halloween we went to a party for the tennis players at the head coach's house, and whilst the Beloved Spouse was building up a bonfire in a paddock, I caught the moon rising over north Texas. 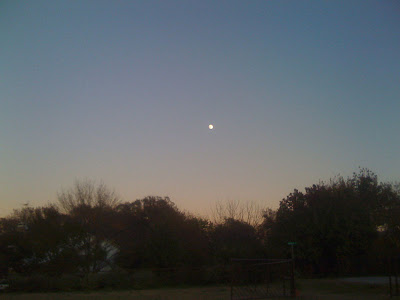 Alas, it's midterm madness time once again, so this will have to be it for now. Happy Skywatch Friday, everyone. Have a terrific weekend.
Posted by Owlfarmer at 6:08 AM

Marvelous shots! Love the puffy white clouds and the last shot with the moon! Beautiful!

Such interesting varied shots. I particularly like the moon rise with sunset.
Hope the midterm madness is productive - and instructive.

Beautiful series of skywatch photos.
Have a great weekend.

So glad to see someone else taking photos on the fly. These are especially beautiful. Thank you for sharing.

It's amazing how much the moon shrinks once you photograph it. It's like the lens shows you how far away it really is.