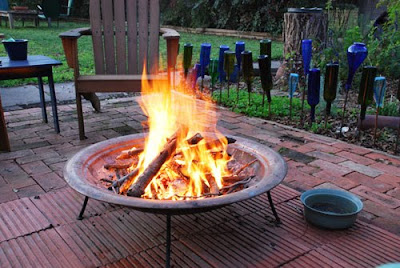 Friday, after the previous night's lovely Thanksgiving meal at our daughter's loft, we celebrated my night off (I usually teach my Visual Anthropology class from 6-10 pm) by building a fire and enjoying the balmy evening.

I had been out with the camera taking shots of frolicking squirrels (to be posted next Friday for Skywatch) and when the Beloved Spouse came out bearing my evening adult beverage, he suggested that we just enjoy the weather and use up some of the brush pile while we were at it.

This fire pit (the successor to the one our neighbor's tree demolished) has been the centerpiece of several enjoyable moments when the weather's been cool enough. But we don't burn things frequently because as peaceful and primal as they are, wood fires pollute. The only thing that justifies the occasional pit or hearth fire is the fact that we try so hard to reduce our particulate emission elsewhere. In addition, all of the wood we burn comes from this property: mostly fallen pecan branches, but other trees contribute as well.

So we sat sipping wine, and later I brought out a plate of Grandma's dinner rolls, cheese, and apples. Despite the three huge streetlights in the neighborhood, the main illumination came from the waxing gibbous moon, and quite a few stars were visible. They were the usual culprits, but at one point we noticed a star-like object moving across the sky rather quickly. I remembered the satellites my Grandmother and I used to watch from her porch in Lone Pine, and wondered if that's what we were watching. Then it struck me: this was the International Space Station, which a bulletin from Space Weather had noted was going to be visible in our area over the next few days.

After it was gone, I went in to check, and sure enough, according to the Flybys page, we had been treated to something I hadn't seen before, and will be looking forward to spotting more frequently. Too bad we missed the double-flyby when Atlantis was still in the vicinity of the Station. But this was good enough for now. It'll be clear again tonight, so we may get another chance--but the temperature has dropped significantly, and the evening won't exactly be as amenable to sitting out.

I think that what strikes me about noticing tiny details in the sky is the rather poetical connection with our distant ancestors. Hunter-gatherers and early agriculturalists all over the world were far more aware of the night sky than we (who can't often even see much of it), and relied on it, surely wondered about it, and were probably quite a bit more amazed by it than folks are in so-called civilized modern times.

Never mind that the object I was watching is a product of our highest levels of technology: it's still a wonder, and it still amazes me. When I can get out where there aren't three gi-normouse mercury vapor street lamps generating another kind of pollution (light), I have a hard time not gazing for hours at the heavens.

The low-tech pleasure of sitting next to a wood fire ties me to our primal past. But I'm also reminded of Jack London's melancholy tale (To Build a Fire) of a man in the wild, realizing the enormous value of fire to human survival. And I can't help but cheer for the dog at the end of the story, who doesn't need the fire and who knows instinctively how to make it through the cold.

As comforted as I was as I sat enjoying the company of my husband and my own dogs, I also knew that the following day I'd be reading about political squabbling and human misery, and would undoubtedly wonder (as I'm doing now) about whether or not we really know any more of real use than we did when we were still few, fragile, and much more mindful of the environment in which we lived.

The fire pit itself points to another irony. We bought it from Smith & Hawken, which was originally focused on craftsmanship and sustainability, but was sold to the Miracle-Gro people a few years back. By then it had gone through several owners and ended up a kind of cartoon version of itself. It's now being closed, which it richly deserves, and so if another tree falls on this one, I guess I'll have to just bang it back into shape and make do. Had I realized that the original owners of the company had urged a boycott after it was acquired by an outfit that espouses chemical pollution on a grand scale, I probably would never have replaced the first one. 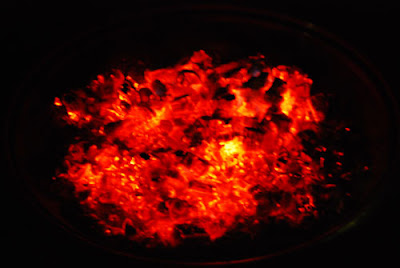 Still, there's something unmistakably pleasant and reassuring about enjoying a fire, even when it's burned down to the coals and is getting ready to go out. The warmth abides, and follows us back into the house. I'm pretty sure I sleep better afterwards, too. And there are still a few Sunday-morning fireplace moments to look forward to over the winter--even though we limit those as well.
Posted by Owlfarmer at 6:31 AM

This is a great read. I wonder if we can grasp a view of the ISS in our place. Have great days ahead.

This is such a heartwarming and poetic post. I love the way you link the fire, the heavens, environmental concers and your awareness of larger linkages.
I have loved the night sky since an early age and used to take every opprtunity to be out and about in the night and watch the heavens. Since all my vision problems from a couple of years back, my biggest loss is my inability to see the night sky swing through the seasons. I can still huddle with my husband near the wood-fired fireplace, one evening a week and tell stories to each other. And no, just because we have named so many things and think we know so much about our world -it is not so - we take for surety and knowledge second hand and mediated knowledge. Personal concentration on the phenomenologic world provides the true knowledge. G and GEM

Japa: you should check the "flyby" link on spaceweather.com; it'll tell you when you can see several objects.

GEM: It's good to hear from you. I'd forgotten about the issue of vision problems. Mine was actually opposite of yours. I had no idea of what stars look like in the sky until I was fifteen and got my first pair of spectacles. Until then I'd been aware only of blurry splotches overhead; I guess you can imagine my utter surprise and amazement when I could see tiny points of light, and this may well account for my current love of looking up. But now I would miss it immeasurably, and as my own vision becomes less acute even with augmentation, I can understand a little of your own loss.

Your insights are, as usual, much appreciated.