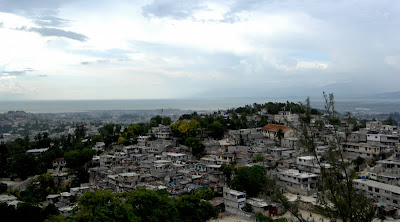 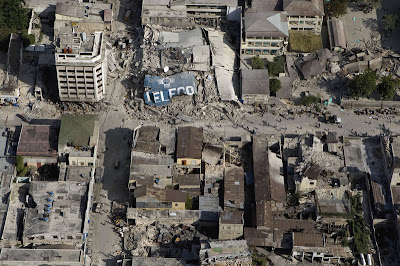 I guess it's because of my geographical roots (I was born on a major fault, where a 7.2 magnitude quake occurred in 1872), but earthquake stories always seem to evoke a combination of fascination, dread, and gratitude that I wasn't there, where it happened. So when Haiti suffered its first major earthquake in two centuries, I was struck by the enormity of the catastrophe and like many others wondered why this had to happen in Haiti, of all places. Hadn't this tiny island nation suffered enough?

Last Thursday I left school in time to catch the last few minutes of The World on PRI. Amy Bracken was reporting about recent, pre-earthquake hopes for improving the lot of millions of Haitians, and about U. S. efforts to reduce disease and poverty in this embattled country. She described an interview with Dr. Paul Farmer, who (along with former President Bill Clinton) has been helping to spearhead investment in the country and to alleviate the effects of Haiti's long history of neglect by the rest of the world.

As Bracken said goodbye to Farmer after the interview, he reminded her of the "hermeneutics of generosity"--an inclination to give. The "H of G" as he calls it, involves a much deeper concept than this shorthand definition, but I was intrigued enough to pursue it. Hermeneutics is part of what I do (it refers primarily to what might be called a "science of interpretation," the theory behind the translation process), although it's most commonly used in a theological context: biblical hermeneutics, for example, which involves interpretation of scripture. This sense is, I think, the source of Farmer's usage--the grounding of generosity in the Christian tradition; it's also a vital component of Jewish teaching and lies behind the notion of the mitzvah.

I discovered, while looking for the exact phrase, that it informs the communitarian focus of some churches and synagogues, and expresses the fundamental concept of charity toward others.

This impulse may explain my tendency to scour the dregs of my bank account in response to global disasters, like the Indonesian tsunami of 2004 and last Tuesday's earthquake. Almost my first response to an event like this is to send what I can off to Doctors Without Borders. And millions of others do the same, within minutes of news reports. Others join their fellow relief workers and jump on the next boat or plane to help out physically.

Amid all the destruction and sheer misery, it may be grasping at straws to see these responses as reflecting any great human truth. Nonetheless, the idea that human beings have an innate capability to translate one nation's suffering into something palpable enough to engender a useful response is reassuring. Perhaps we aren't all so wrapped up in our own D/depression that we can't feel the distress of others. Perhaps this kind of understanding--the hermeneutics of generosity--is more a part of who we are than the greed and churlishness that has characterized the news so much of late, and more reflective of our true nature than the usual "God did it to punish them" response that also emerges.

Our metaphor-making capabilities as human beings allow us to understand something--if only a little--of what people experience when disaster strikes. Few of us have first-hand knowledge of what it's like to endure a severe earthquake or a tsunami, or even a massive hurricane or typhoon, even though these do strike us periodically. Even when a Katrina devastates an entire region of the United States, and even as badly as the relief efforts turned out there, we didn't end up with thousands tens of thousands dead in the streets. Our infrastructure may be in need of repair, but the means exist to do make it better. Haiti is much less well prepared to withstand this latest blow. (Edit 01.19.10 after this morning's headlines.)

Those of my colleagues who think I'm the quintessential pessimist may be surprised to know that I actually do harbor hope that if Haiti can withstand the inevitable chaos that follows disaster in an already politically unstable region, it may well be that the attention attracted by the massive (and unfortunately ill-coordinated) relief efforts will lead to an effective political and cultural rebuilding.

If you search Wikimedia Commons for pictures of Haiti (specifically Port au Prince) it's easy to be reminded of the continuous insults inflicted on the entire island both by natural disasters and by an almost constant political unrest. Before the earthquake, it was Hurricane Jeanne (2004) and then Ike (2008), in addition to all of the political woes experienced by a nation that's been both exploited and neglected for over two centuries. But the same search will indicate the ongoing effort over the last several years to improve Haiti's physical and economic health.

Everything I've heard about the Haitian people over the last week has pointed to their liveliness of spirit and their creative energy. Perhaps implementing a hermeneutics of generosity and extending it into the future, beyond the immediate need, can help save them and help them save themselves.

If you want to participate in the drive to help Haitians, and haven't yet done so, I have two charities to suggest: Doctors Without Borders (Médecins Sans Frontières) and Heifer International. The former is a fairly obvious target, because they're almost the first people on the ground when something like this happens. Heifer, known more for helping families to help themselves, has 16,000 participating families in Haiti who have been actively involved in raising animals and improving agricultural practices to provide both sustenance and income. Programs like these address both health and economic well being, and provide living, breathing examples of the hermeneutics of generosity at work.

I talk a great deal about ways to heal the world (tikkun olam); it seems to me that helping Haiti to heal itself would be a good place to start.

Photo credits: A view of Port au Prince in 2008, U.S. Navy photo by Chief Mass Communication Specialist James G. Pinsky; a United Nations Development Programme photo of Downtown Port au Prince after the earthquake; and another U. S. Navy photo of flooding after Hurricane Ike.
Posted by Owlfarmer at 8:55 AM

Very well put....I will post a link to this on my blog as well.