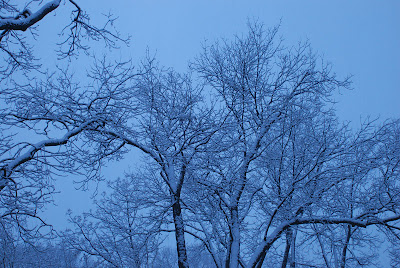 No, I haven't escaped Texas. The title of the post is just my lame attempt to take off on "sierra nevada" or "snowy mountain range" to create "snowy prairie." We haven't seen much of the sky during the last 48 hours, but it's always good for background.

Y'all in the East are probably pretty sick of snow by now, but we here in the southern Midwest generally get a bit giddy about falling flakes--at least until it's time to drive somewhere. The only folks in Texas who know how to negotiate snow in a motor vehicle are those who come from somewhere that sees the white stuff more often than we do.

This is our second measurable snowfall of the year, and it's a beut: records were set all over north Texas, and probably what hit us is already on its way to muck up things even worse on the East coast. We measured between eight and nine inches in our back yard, and I got enough snow pictures over the last two days to last a while. 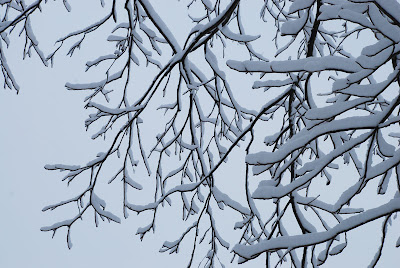 Six years ago we had our last good snowfall, also on Valentine's weekend. It was the same week we got the puppies, and watching their little bodies flopping around in snow as deep as they were tall produced much hilarity. My daughter and I braved the weather to fly to California to see my father for the last time before he died about a week later. It was a bittersweet weekend altogether, but at least Daddy was alert and able to eat some of the lasagna I made for everyone. I took the puppy-frolicking film with me and had it developed at the local Walmart so he could see how cute they were.

I'm sure my littlest owlet is thinking pretty much the same thoughts as she looks out over a snowy Dallas skyline this morning.

As in most things, moderation is always preferable to excess. I've lived in Philadelphia and Chicago during winters where two feet of snow would drop predictably a couple of times a winter. The city would relax for a day and then get back to work, which can happen when you don't depend so much on cars for transportation. Here, it only takes a few inches for things to grind to a halt. That's not necessarily a bad thing, as I sit typing without the din of traffic seeping in. The only noise is bird chirping, the background hum of the furnace, the occasional crackle of a log on the fire, and "puppies" snoring away after a morning romp. 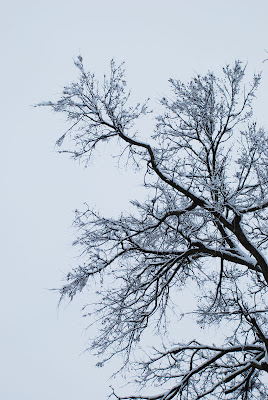 By tomorrow, most of it will be gone, and things will be back to more-or-less normal; the Beloved Spouse will be working a tennis tournament, and the high should be in the upper 40s. I imagine things will be a bit different in Philadelphia and DC.

Happy Skywatch Friday, People. And I hope the snowbound Easterners make it through.

Photo notes: The opening shot was taken yesterday, in the blue of late evening. I took the other two this morning. Both were taken with the Nikon D80 on auto.
Posted by Owlfarmer at 7:19 AM

Exciting! We are finally getting our first and likely only measurable snowfall the season.

Terrific shots! I love the first two. And that much snow in Texas!!!! I bet my son got a day off -- he works at the University of North Texas, but lives in Dallas. I haven't talked to him today, but bet I will. Hope you have a great weekend!

love how the snow decorates the trees like that

when you have a chance, visit our skywatch at the daytrippers

These are lovely photographs - I like the evening shot particularly. Who ever knew that Texas ever experienced snow?
I hope your memories of the last snow are now more sweet than not.

I love that first shot...the blue really makes it dramatic.

Great photos..thanks for sharing them with us. It must be fun, when you are not used to so much snow!

I know because I am from Australia, and am ashamed to say that I had had never seen snow before my daughter grew up got married and moved to NYC 8 years ago! It is such fun to experience a winter here. (And to miss our hot humid summer). Unfortunately I have been ill both times in the winter here, so I am unlikely to be invited at this time of the year again!!! (Unless desperately necessary).

Thanks for visiting my blog...so nice to meet you, and to read your interesting blogs...no doubt I will be back!

I spent 10 years in N. Tx. and never saw snow like you've had most recently! Hopefully, it will "go away" as quickly as it came. Beautiful photos! ~ks

We do get a good amount of snow, but I truly love a big snowfall. Your photos are wonderful!

You are so right. This "owlet" has been thinking non stop about that snowfall 6 years ago. I will never forget the panic when our flight got canceled, the relief when we finally got on the plane (and how we got to sit together I will never understand), and then of course that lasagna.

He made such happy noises as I fed it to him, and that day he still knew who we were. I never was one for Valentine's Day, but he was the best damn Valentine's date I've ever had.

Every snowfall, every Valentine's Day, I will always think of him. Love him, love you, and love that we shared the same thought today.

Lucky you, thats a skywatch you will never get a picture of again. At least while your in this state.