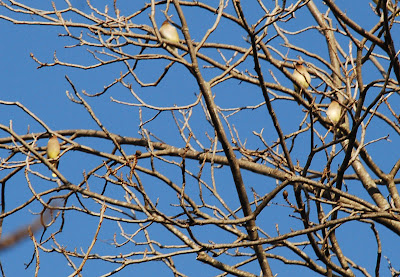 All of these photos were taken a few weeks ago, before the snow. But since then, all but the hawk have been hanging around--along with more robins than I've ever seen. As usual, the sky provides the perfect background for bird pictures.

I didn't take part in last weekend's Great Backyard Bird Count, but if I had the number of robins alone would have signaled some kind of weirdness--perhaps the kind Thomas Friedman was talking about this week in the New York Times, and that I ranted about in The Owl of Athena yesterday. Whatever the cause, the year's bird visitations have been odd.

The bloody cedar waxwings keep coming back and contributing rather un-artful decorations to any horizontal surface they happen to roost over. The color of droppings depends on the berries they ingest, but since they were stripping the privet all weekend, most of the fresh "bird lime" was purple. They've pretty much exhausted the pyracantha and nandina, which left orange highlights. The shot below shows them roosting in a Chinaberry tree next door--these berries are now too dessicated to add any color--but in spring they're purple, too, and they make birds drunk. 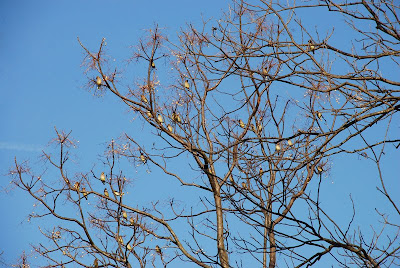 My coolest visitor over the last month has been a young sharp-shinned hawk. My vocally talented border collie/basset mix, Arlo (who can imitate a barred owl), has a special bark to announce the hawk's presence, and I've been able to catch him a couple of times waiting patiently for the unwary squirrels that plague my yard, or the occasional cotton rat. Squirrels may be absolutely brilliant at getting into bird feeders, but they're incredibly stupid when they're young, and the hawk got at least one of them while he was hanging around.

The shots below show him front, back, and (not very clearly) in flight. 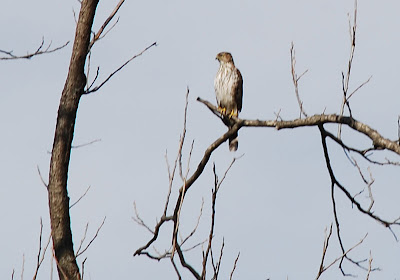 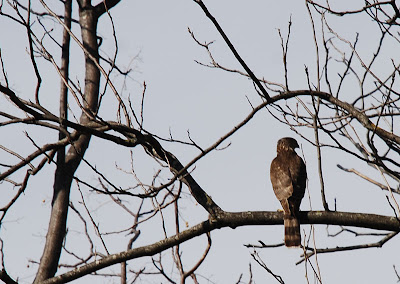 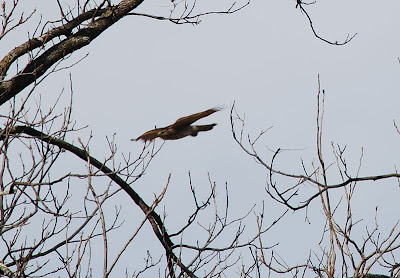 My feeders and suet cages attract mostly English sparrows and cardinals (I have three cardinal pairs at the moment) and pigeons and mockingbirds and jays. But skittish little Carolina wrens and goldfinches sneak in when the others aren't hogging things--and I've put some treats for them away from the fray. Flickers and downy woodpeckers, and a few nuthatches and titmouses (mice?) show up, too. What I have missed, though, for several years now, are the little slate-colored junkoes and the song sparrows that were backyard regulars when my children were growing up. We'd even get meadowlarks on occasion--but not any more.

When the kids were little, we could get out of Plano in five minutes. Now you practically have to drive up to the Red River to see real open land. McKinney, where we live now, was out in the middle of nowhere. My children attended a Montessori school on a single-lane gravel road amidst open prairie, and we'd see roadrunners and all manner of raptors on the way.

That school is long gone, and the prairie filled in with tract houses and six-lane roads and strip malls. The dwindling forest cover is making every hawk sighting a special event--and makes me truly happy that I let what was once a pesticide-laden garden plot go wild. It's only about the size of an urban yard, but it gives me a small carbon sink and provides some good shelter and forage for 'possums and hawks and other beasties. It also limits the amount of open sky I get to see from here, but the sacrifice is, I think, well worth it.
Posted by Owlfarmer at 6:33 AM

Great post and I love your photos of the birds. So many!! I do think there are strange things happening with nature/birds/weather lately. Hope you have a great weekend -- you and the birds!!

Your hawk photos gave my heart strings an enormous tug! Breathtaking! I don't get to see cedar waxwings, so I enjoyed their photos and especially love the shapely tree they chose! Have a beautiful weekend!

I loved seeing all your birds! There is a lot of snow where I live, the only things being clear are roadways, driveways, and sidewalks. Food sources must be scarce. There was a robin hopping around in my driveway yesterday who seemed quite unafraid of my nearby presence.

Wow I wish we have that many birds too. The blue skies is so lovely happy weekend!

What a great post. The cedar waxwings passing through were always one of the first signs of spring when we lived in Washington state. Nice to see another tree full of them.

Thank you for sharing. The hawk photos were wonderful!

How interesting to see different-coloured bird lime. We do sometimes see purple but it's usually uniformly white! It's lovely to see so many different birds. We have sparrows, though they are declining in numbers, titmice and goldfinches. The hawk is beautiful.
Our Great Garden Birdwatch was during January.
The sky in your first two shots is such a beautiful blue!

I would be thrilled to have a tree full of Cedar Waxwings! I probably won't see any until spring. Last year the nibbled my crab apple blossoms. I don't get to see them very often. I can understand your frustration with the droppings however :-) Nice hawk, too!

That's awesome I didn't know birds could be intoxicated.