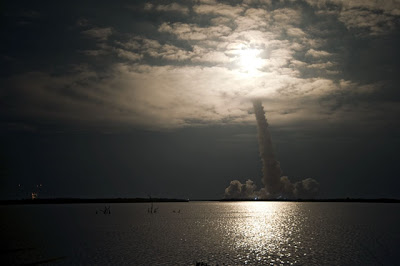 As faithful and devoted a space-junkie as I am, and as disappointed as I am that human presence in space will be limited to the ISS in the near future, I have to admit that shelving man-on-the-moon programs and costly (both environmentally and fiscally) shuttle launches may be the best thing that's happened to the space program in years.

Many of us who escape being earth-bound only by means of science-fiction enduced flights of fancy have actually hoped that the focus on near-earth orbit ventures would at some point give way to more adventurous and potentially interesting projects, like Mars visits and bigger, better, badder telescopes and data-gathering technologies. Before I die I would really like to know a lot more about what's outside our solar system. Although I don't expect this to happen, I'd also love to be alive when the first explorers set foot on Mars.

The February 8 editorial in the New York Times (a follow-up to the story on February 1 about proposed budget cuts and changes for NASA) lays out the proposed plans beautifully, many of which may turn out to get us where I'd like to see us go.

Although space travel and moon landings have a way of inspiring people, as they did in the sixties, they also tend to bring out international oneupsmanship, as they did in the fifties. What we need now is co-operation, and there's really no reason at all why Russia can't take over the task of ferrying astronauts to and from the International Space Station once it's complete. The European Space Agency and private firms are also perfectly viable sources of potential space exploratory vehicles and technology. We could certainly focus on thinking and planning before we worry too much more about building--especially since the kinds of technologies we'd need to get beyond low-earth orbit involve (at least in part) the same kind of digital wizardry that's brought us millions of Toyota recalls.

The United States has always fused adventure with pragmatism, cloaking visits to the moon in promises of "useful" products (Tang, Teflon). But interest in gimmicks has died down a bit (Tang tasted awful and was full of crap we shouldn't be ingesting; Teflon infuses our food with more crap we shouldn't be ingesting). The successes don't seem to have provided all that much in the way of revolutions in consumer goods. Freeze-dried strawberries (they did get that right) probably aren't a big enough payback for what we're pouring into NASA's budget. In tough economic times, people's imaginations tend to wither. Rather like freeze-dried strawberries.

For nearly three decades I have watched Shuttle launches, monitored NASA's website during missions, mourned lost astronauts, and envied everyone who's gone up. But I've also hated the idea that they had to leave the planet riding huge fossil-fuel filled towers of incendiary chemicals. It's always seemed to me that if we're so smart, we ought to be able to figure out a way to "slip the surly bonds of earth" without mucking up the atmosphere or risking the lives of everyone on board the vehicles being shot into space like ammunition.

Perhaps a respite and an effort to reinvigorate the very idea of space exploration isn't such a bad idea. And it does give me an incentive to stay well, so I'll be around for whatever discoveries come from it all. What I do fear in the hiatus, however, is a lessening of educational focus on astronomy and space, without the wonder of a shuttle launch to remind our children of how seriously cool space exploration really is.

In Robert Charles Wilson's Hugo award-winning novel, Spin, the earth is enveloped in a sort of time blanket, outside of which the universe ages precipitously, and inside of which an artificial sun is the only feature to be seen in the sky. When the "spin" ends, a generation has already grown up that hasn't ever seen the stars. My only real fear about losing the current focus on moon-landings and "local" exploration is that we may be fostering a generation of children with little interest in "outer space." Still, I was ten years old when Sputnik was launched, and have been a staunch fan of the universe ever since. Perhaps a few years won't make all that much difference. To take a look at what's still going on, it wouldn't hurt to visit the NASA Current Missions page. It's actually pretty reassuring.

It's good to see all of the missions that NASA has going into "outer space" :)

At a star party we attended last weekend we learned that if we were to read a 20-page booklet about astronomy, we would know more about the universe than most of our fellow Americans.

The man who led our group does programs at elementary schools and said that when he asks how many kids in the audience are interested in becoming astronomers, he is lucky to get one upraised hand.