Nature Red in Beak and Claw 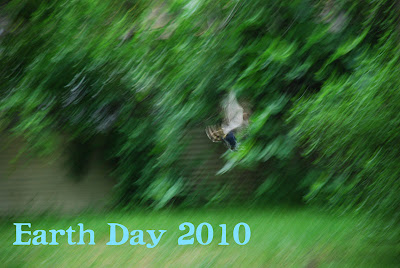 Sunday afternoon, which was dreary enough that we stayed indoors, both the Beloved Spouse and I were alerted to potential drama by the squawking cacophony of at least a dozen blue jays in the back yard.

Sure enough, the lot of them were doing their best to scare off our neighborhood punk--a sharp-shinned hawk who thinks our particular back yard is a feeding trough. His usual victims are cotton rats and small squirrels, along with specimens from our abundant supply of English sparrows. This time, though, he snagged himself a fledgling jay.

I took a couple of shots through the screen door, not wanting to interrupt his meal (although he hadn't actually killed it yet), but then tried opening the back door quietly enough to get a cleaner view. I snapped one while he was on the ground, and then he took off, jay in his claws, followed by the unsuccessful defenders. I hadn't had time to set the shutter speed, so all the pictures were blurry--but I did think the photo that serves as my Earth Day "poster" this year ended up looking almost as if I'd planned it that way.

This is, in fact, the third Earth Day on the Farm, and I wanted to take a moment to reflect on the sheer power this planet has exerted this past year, and--oddly, for curmudgeonly person like myself--to appreciate what most people will agree were pretty devastating events. Like the hawk amidst the blue jays, it's all been part of the way things work.

Perhaps we need to be reminded occasionally of who's really in charge here: Mom. Mother Earth, Gaia, Terra, or whatever we choose to call the planet on which we find ourselves living, she's one powerful babe. It seems natural to see her as a her, primarily because she does nurture life in a somewhat motherly fashion: providing us with materials for satisfying our basic needs within what many television series are showing us these days to be spectacularly beautiful, and yet infinitely fragile. If you haven't already, take a look at Planet Earth, Life, and/or Ken Burns's The National Parks. The variety and beauty of the species who share this space consistently drench me in wonder.

But Mother Nature also makes use of an equally wondrous variety of meteorological and geological events to shape and build the planet and that frequently put us in our place. Two major earthquakes and an economically expensive volcanic eruption can serve as timely announcements that human beings do not rule the universe.

Whether these events inflict damage on the undeserving poor in Haiti or Chile or Mexico, or simply disrupt the travel plans of the wealthier members of our globalizing economy, they do call our attention to the devastating power that lies beneath the feet or above the heads of every being living on and within the frail skin of earth and atmosphere we call home.

I keep hoping that disasters will make us wiser; that they will teach us to do better next time--in managing our population, building appropriate infrastructure, making sure that we understand science well enough to prevent much of the human (or even the general biotic) cost of events that shake the land, shift mountains, raise tides, and generate tumultuous winds.

Within every tiny glimmer of hope lies a realization that whatever we're doing, it's not enough. The disease metaphors keep creeping in: cancer, plague, pandemic. Only when I think of these diseases, I think of human beings as being the agents more than the victims.

Our many thoughtless follies, including our greed for things we don't need, and our sybaritic overindulgence in physical pleasure and quest for material wealth, lead us to make unsustainable choices that may not be reversible.

Over the next decade, and ten more Earth Days, we'll inevitably be visited with typhoons, hurricanes, earthquakes and tsunamis, tornadoes, volcanoes--everything Mom can throw at us while her internal processes are at work. How these "disasters" affect the denizens of this planet will increasingly depend on how human beings manage what's actually within our power.

Do we keep adding more and more population, using more carbon-emitting fossil fuels for power, threatening one another with war, building inappropriate structures in seismically active zones, attracting people to cities that can't sustain them, and living well beyond our environmental means?

We may not have the power to control natural processes, but we do have the power to mitigate the damage they inflict. Whether we choose to live in ways that help prevent the kind of suffering endured in Haiti, or ease the effects of drought on famine-stricken populations, or even encourage ways of traveling that don't lead to economic catastrophe when a volcano erupts, or whether we just go on as we have been--it's up to us. We can choose.

I'm just not convinced that we will.
Posted by Owlfarmer at 6:01 AM

Well said, as usual and nothing with which I disagree.
Today my offering is the sky above Lone Pine. Just the sky though and the slightest glimpse of the Sierra.

Well said indeed - and when do we feeble humans ever learn by our mistakes, from history, through insight or education or even instinct?