Classify this one under meteorological metaphors: a weather-related phenomenon that applies to mood, most commonly in hot, sticky, muggy, calm summer conditions.

The "doldrums," or (according to the Glossary of Meteorology) "equatorial calms" refers to very specific conditions occurring in a very specific region of the world: the Intertropical Convergence Zone where the tropical winds from the northern and southern hemisphere meet and generate the trade winds. 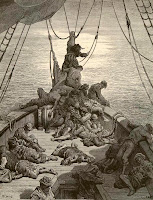 I was watching Serenity (yes, again) the other night, and Mal's remark about the albatross sent me back to Samuel Taylor Coleridge's Rime of the Ancient Mariner, where we get the sailors' experience of being becalmed in the region when the winds die down (often for significant periods) described for us in grim but painterly detail:

Down dropt the breeze, the sails dropt down,
’Twas sad as sad could be;
And we did speak only to break
The silence of the sea!

All in a hot and copper sky,
The bloody Sun, at noon,
Right up above the mast did stand,
No bigger than the Moon.

Landlocked as we are here in north Texas (and the map that opens the post shows just how far away the Doldrums are), we can nonetheless sympathize at times, especially after a period of relatively cool, rainy days when the temperature starts rising and the humidity with it.

This is the first July I can remember when we haven't had a single day over 100F into mid-month. Because of the humidity, though, the heat index makes it feel much hotter and these conditions persisted well into last evening in some areas. For the last several weeks we've been able to sleep without the air conditioning on, but no longer. And this morning I didn't even shut it down and open up for a few hours. We're only talking two rooms here, but to me that's an extravagance.

I may be more sensitive than some to this kind of weather because of the time I spent in the tropics, where spells of 90 degree temperatures accompanied by 90 percent humidity characterized our summers. We had no air conditioners in those days, and running through a sprinkler offered no respite. A few hours at a spring-fed swimming pool or a trip to the beach or a local lake offered our only relief before I moved back to the States.

Years ago, when I lived in Philadelphia, I remember a particular summer during which a tropical depression hung over the city for the better part of a week. My memories of the time run in slow motion, and are so palpable that I can remember being conscious of my blood flowing through my veins (back when it could do so without the aid of anticoagulant drugs!):

Things aren't much different now, although the present moment lacks the kind of intensity twenty-somethings can feel. Still, the weight of the air will make it hard to do anything today that doesn't take place in the air-conditioned study. As inviting as the back yard looks, with its shady areas and comfy chairs, the air will be too thick with moisture and mosquitoes for me to accept. I'll have to brave it all for a few minutes if I want to snag a few figs before the mockingbirds take their daily toll, but that'll be the extent of out-of-doors activity this morning.

Perhaps the only good thing I can imagine about climate change and its local effects is the element of surprise: who knows what will happen next? The usual patterns are changing so rapidly that the next two months might not turn out as expected. The albatross may yet show up to bring us luck--unless, of course, it's befouled by the mess in the Gulf.

I find myself checking in at least once a day on the hurricane watch app I've installed on the iPad; except for Alex (and the tropical depression called "'Two"), there hasn't been much activity so far, but he season promises to be "interesting" according to the forecasters. One can only hope that we don't get another big storm until the leak gets capped and they've had a chance to do some more cleanup down there.

As I was moderating comments this morning I noticed that this is my 200th post on the Farm, a couple of weeks past my third anniversary on Blogger. Although I don't get around to posting as often as I'd like these days, I did want to let anyone reading know that I have appreciated all the comments and input over the last three years.
Posted by Owlfarmer at 8:22 AM

Many folks point to a period of cool weather and say "see, no global warming". It's too bad we didn't start out calling it "climate change". More unpredictable weather, warm when it should be cold and cool when it should be hot, droughts followed by floods followed drought. Still, people say "no problem".