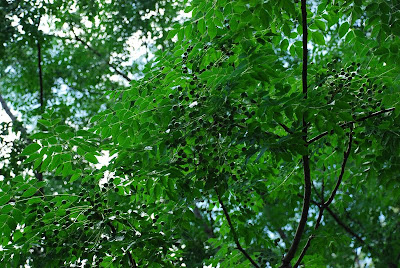 After staying indoors for most of yesterday morning, I braved the heat and bugs in quest of figs and pears, hoping to rescue both from the barbarian critters (mostly mockingbirds and squirrels) that nibble and run. Don't these guys know you're supposed to finish what you put on your plate? 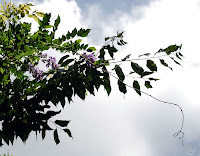 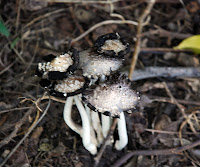 Anyway, I took a few quick (i.e. not very carefully framed or composed) shots of hot, sultry, summer clouds and of the garden and was rather amazed to find late-blooming wisteria and fairly dangerous-looking mushrooms--as well as a streak of white fungus that, on first glance, looks like old wet loo-paper. I didn't include that one, and I haven't had a chance to identify the 'shrooms. They'll be gone by the time I go out again--but the recent wet weather and abundance of rotting wood around here has turned this place into a mushroom aficionado's dream.

The Rose of Sharon bushes are still in bloom, although the white one's dropped most of its flowers, and the purple one has gone pink. This happened once before; the first round of blooms are followed by smaller, pinker flowers for a second show. It'll stop now, for most of the rest of the summer, and then bud up and bloom again in early fall.

The Chinaberry (opening shot; I know it's cheating, but the sky really is peeking through the leaves) is fruiting, although it'll be a while before they ripen and start attracting grackles. The Cedar Waxwings seem to have left for less balmy climes, but there will be plenty of drunken poopy birds after the berries are fully ripe.

As I sit in my study typing this morning, I'm enjoying a veritable parade of birds taking advantage of the two bathing areas outside my window. The goldfinches are out in posses of three to six, but get out of Dodge as soon as the mourning doves decide to take over. There have been robins, brown thrashers, cardinals, and sparrows as well. I'll have to refill before long, because they've splashed out so much of the water.

Thanks, as always, to the Skywatch Friday team for giving me something to do besides grouse. I wish you all a happy third anniversary, and hope everyone has a great weekend.
Posted by Owlfarmer at 6:03 AM

What a lovely post to read and see first thing in the morning. Thank you!

A very enjoyable post as ever, Candace. I laughed at the thought of drunken birds indiscriminately pooping - our bird visitors aren't inebriated but still manage to cover a fair amount of foliage, grass and paths.
Your comment about enjoying photos that combine nature and technology reminded me of a conversation Barry and I had yesterday. We have been watching the Tour de France and one of the commentators bewailed the wind turbines 'spoiling' the beautiful countryside. We disagreed - technology is beautiful and a salute to man's inventiveness and imagination.
Hope the weather becomes more bearable - have a lovely weekend :-)

Oops - I left too soon!
Another enjoyable post, Candace. I laughed at the idea of avian drunkards pooping indiscriminately. Our birds aren't inebriated but still manage to cover a fair area of foliage, grass and paths.
Your comment about appreciating photos combining technology and nature reminded me of something Barry and I spoke of yesterday. We have been watching the Tour de France and one of the commentators bewailed the huge wind turbines 'spoiling' the beautiful countryside. We disagreed with him, believing that (much)technology is beautiful and a salute to man's inventiveness and imagination.
Hope the weather becomes more bearable. Have a lovely weekend :-)

Thanks for sharing your morning thoughts! I'm a morning person, too. We have a scrub jay who has taken over our neighborhood and he (since he is so vividly colored, I'm assuming it is a "he") claims our yard as his prime territory. I love to watch his antics. Now, if I could just get a decent photo of him!!!

I have to echo what Clariz as written -- such a delightful way to start my day! Lovely post and photos! Thank you so much for participating in Sky Watch as we begin our fourth season!! Have a beautiful weekend!

I found that imagining myself in your world for a few minutes warmed up the very cool, fresh and windy day we're having here.

Must be great to sit and watch all the birds. Now that I think of it, I never see any birds bathing in our natural lake by the cabin unless you count the ducks, geese and loons who live there most of the time. Must be something about a bird bath that attracts them. - Margy

It looks like you have a lot of green and growing things there where heat and moisture rule. Glad you went outside to take some photos and maybe hear some birdsong. Have a good weekend.

There is a small contest running on my blog, to participate, you need to only,