A Ride on the Cat Bus 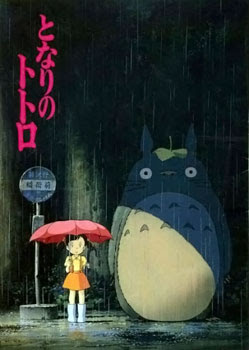 The news is not good. Yesterday, tar balls showed up in Galveston, and today insult is added to injury on Lake Pontchartrain in New Orleans: oil from the BP spill has breached all barriers. I don't live anywhere near the Gulf, but the pain of the residents is leaking northward, and the sadness and sense of helplessness has penetrated deeply into the prairie. If I didn't have to go back to work on Friday, I'd be down drinking on Bourbon Street or hanging out on a pier in Galveston with old neighbors, just to show support.

Sometimes what one needs is a good dose of Hayao Miyazaki, and the evocation of childhood innocence that always shows up in his films. Tonight we watched My Neighbor Totoro again, just because we needed a fix of humor and sweetness in an otherwise dismal world.

One reason I've always found Miyazaki's films both entertaining and psychically energizing is that I can actually understand some of what goes on. I've never watched any of them in English, but baby Japanese is pretty hard to lose, and even without subtitles I can usually follow along. Although I only spent a couple of years in Japan (from ages 5 to 7 ish), the smidgen of the language I learned from living in a tiny shack in Kunitachi while my dad was stationed at Tachikawa Air Base not long after the end of WWII has stayed with me for more than a half a century. Both "towns" are now huge, thriving cities; but in the early '50s, they were villages with few amenities and a very traditional way of life.

Our "house" (before we moved to the military housing at "Green Park"--the link has some photos that look vaguely familiar) consisted of three rooms: a living room with a pot-bellied stove, a bedroom where my brother and I slept in bunk beds, and a kitchen. My parents slept in a bed in the corner of the living room, and that's also where we ate (on a table in another corner). The "bathroom" was out back somewhere, consisting (no doubt) of a "benjo" (toilet) and possibly a "furo" (bath)--but I seem to remember bathing at a public bath nearby. The scenes in the furo in Totoro always remind me of time spent in those baths as a family. 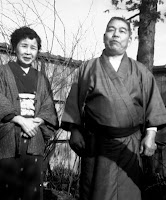 We lived next door to a dancing school, and my ever-enterprising mother talked the headmistress into exchanging dancing lessons (for me) for English lessons. So I was taught the ancient Kabuki dance, "Fuji Musume" (Wisteria Maiden), and came home to the States with a lovely kimono and all the accouterments: fan, geta, and a bow with cranes perched on it. I hope the dancing teacher got her money's worth in English. A few years ago I found some negatives from the period in question, and I think the photo at left is of my dancing teacher and her husband.

The Japanese I learned as a five year-old comes in handy when watching Miyazaki's films, because he understands kids better than anyone. The children in his films are just like those I learned to dance with: happy (giddy, almost), innocent, energetic, and open to almost anything. The children I knew then were the original "free range" kids, who played all over the place and didn't seem to be afraid of anything.

Watching Totoro tonight brought all of that back to me, and made me long for a cat bus to ride to get where folks could fix things. But because I don't have Totoro for a neighbor, I'll just have to rely on conversations with some of my anime-enchanted students to get a small sense of the delectable silliness that inevitably results from watching anything that comes out of Studio Ghibli.

I know it's not doing Louisiana or South Texas any good, but if more people understood the world the way Miyazaki does, I think there would be a whole lot fewer catastrophes occurring anywhere.

Image credit: I stole the poster from Wikipedia's page on Totoro.
Posted by Owlfarmer at 5:46 PM

You know I still have yet to see My Neighbor Totoro, shoking isn't it.