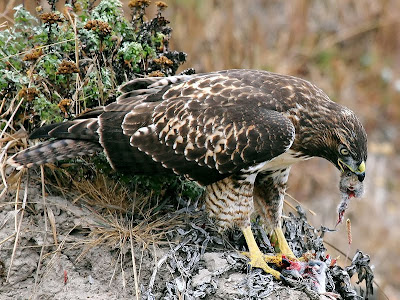 My Thursday afternoon ride on my stationary recumbent bike presented me with an interesting conundrum. I've been using the iPad to read Juliet Schor's new book, Plenitude, while I ride, but am easily distracted because the bike is on our screened-in porch, and I've got a nice view of a large pecan tree upon which all manner of activity takes place.

I guess one can tell I'm not a real photographer, or I might have slipped off the bike and tiptoed into my study to get the camera when a nearly full-grown red-tailed hawk alit on a nearly horizonal branch of said tree. I thought he was just resting, and kept an eye on him, but kept riding. By this time my dogs had settled down next to me to watch as well.

We soon discovered just why the hawk had chosen this particular perch. A young squirrel was making his way up the tree, and the hawk sat watching, patiently. The little guy got closer and closer, and turned his back on the bird for a moment. The hawk crept down his branch rather noisily, but the squirrel seemed not to notice. The next time he turned around, however, was his last, because the hawk gracefully lifted his big body up and down onto the tree rat, flew back to his perch, and then down onto the grass, prey between his claws.

The only camera handy was my iPhone, so I tried to snap him on the grass, but he was hidden by some cannas (dash those big leaves!). I got up off the bike for a better shot, but spooked him, so no picture to accompany text. I also lost .10 mile off my workout. Fortunately, Wikimedia Commons came through with a rather lovely shot of a similar event.

A better person than I might have tried to save the squirrel, but as I've mentioned, they're currently the bane of my little domestic world: plants dug up, fruit devoured, pecans wasted (this will be our third year with no yield at all). So I watched silently as nature had its way.

I'm not sure how I would have felt if the little squirrel had screamed in pain, but it didn't. The hawk did his work quietly and efficiently before he flew off to enjoy his meal.

Image credit: Hawk eating prey by Steve Jurvetson. Be sure to read his description of the event he caught on film. Even if I'd had the camera I couldn't have captured anything nearly as amazing. (The link is to his Flickr page, but I found the image on Wikimedia Commons.)
Posted by Owlfarmer at 2:03 PM

I am soft hearted by nature but do not get upset when the hawks come to feed on the birds feeding in my yard. I know that when I put out birdseed I am feeding the sharp shinned hawk as well.
My son has an almond tree which produces fruit he finds not worth his effort. He is glad that the squirrels prefer the almonds to the plums which he does like and ripen at the same time.

Squirrels are one of what I'd call "nature's Cheetos." Quick snacks for animals on the go! ;)

I am definitely stealing that line, Dave. My dogs have had their way with several of the varmints over time, and we've dubbed them "fuzzy dog cookies." The dogs never really eat them, though--although they do tend to lick them. Maybe we should call them "fuzzy dog lollies" instead.