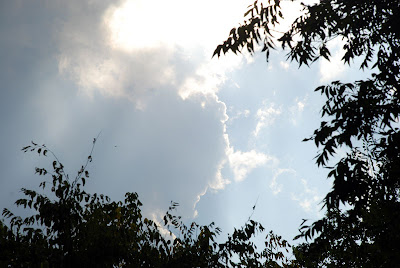 The news has been full of storm stories, including rather stunning videos of the tornado that touched down in nearby Rice, Texas on Sunday. This week's Skywatch photos are of that same storm, but it only grazed us. As it approached, I shot both north and south/southeast, turning 180 degrees alternately: blue skies and white clouds on one side, gathering greyness on the other.

On Saturday, as I waited for the Beloved Spouse to return from east Texas with the tennis team, the tornado sirens went off here, but despite the wind, rain, and chaos, nothing much happened. By the time he got home that night, we'd suffered no more than the usual scattered pecan branches. The next afternoon I decided that the impending drama deserved documentation, and these are the results.

The shot that opens the post shows a slightly different view, toward the southwest. The rest show the contrast between what was going on to the north and south.

As the storm moved up, the sky gradually became darker, but since the sun was shining in other directions, the contrast is more apparent in some of the photos: 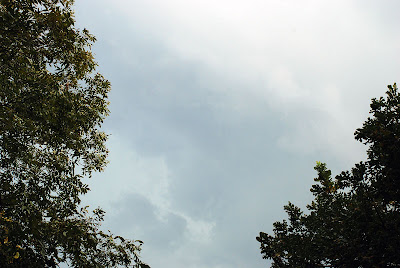 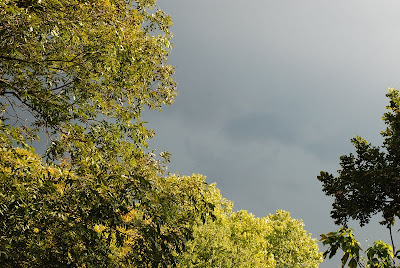 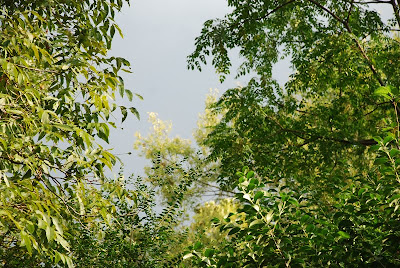 To the north, the front line gradually became apparent, but even when it passed through, a small patch of blue was still visible (at the bottom left of the image). 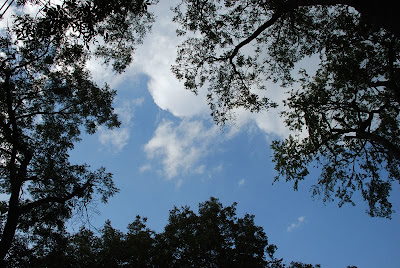 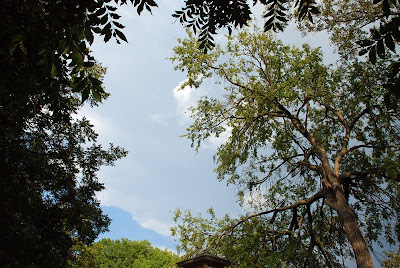 I've resurrected my project to photograph each named full moon for a year, only because I've managed to capture the last two: the Harvest moon on the equinox last month, and the full Hunter's moon last Friday night. This, of course, was the night that the Texas Rangers captured the American League Championship title and headed to the World Series for the first time in the club's history. Buzz from folks who attended the game mentioned the spectacle of fireworks over the stadium lit as much by the full moon as by the park lights. I've shot many a moon over Ranger's Ballpark, so it seemed a fitting astronomical tribute to an historic event. Here's my usual lame effort from the front porch. 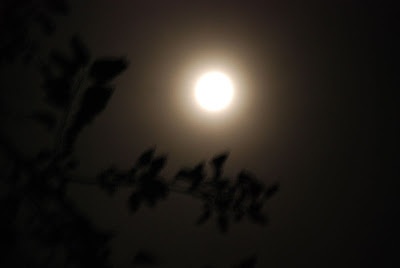 The rest of the week didn't go as well. It became apparent on Sunday night that our cat Koko, who's been suffering from lymphoma for several years, was ready to meet his maker. The poor cat looked like a skinned monkey, although he was once so round and fuzzy and black that we named him after Koko the gorilla. He was so thin we could see the blood vessels in his legs when he sat in the sun. He was a pretty valiant cat, and had endured all manner of indignities over the length of his illness.

Our vets do a very sweet thing for clients when a pet is euthanized. They cast its paw print in a little clay heart and present it to the family when they come by to pick up the little cedar box containing the pet's ashes. Unfortunately, the last two years have not been good to our cats, so we now have a collection of four clay hearts--and an entire shelf of a closet devoted to pet urns. One day I'll figure out an appropriate memorial for the back yard and deposit all the remains together.

Koko's demise has produced mixed reactions. I'm glad he's not suffering (we were never sure whether he was in pain, but he certainly seemed to experience embarrassment when he couldn't make it to the cat box), and feel somewhat guilty about the relief that brings. For the past four years we've been caring for and cleaning up after a cat who's never complained and who remained cheerful throughout. Constant medication and litter-box issues have meant no holidays, so his death brings freedom from the burden (and the expense) of maintenance and the ability to take the pups on a camping trip or a family visit. We're down to one easy-to-care-for cat and the two dogs, which is probably an appropriate number of pets for a couple of geezers.

Last night's first game of the World Series didn't help our moods much, with the Rangers' being trounced by the Giants. Here's hoping things go better tonight. Have a happy Skywatch Friday, all, and a pleasant weekend.
Posted by Owlfarmer at 1:18 PM

Beautiful autumn sky,storms and all.
Condolences on Koko's passing,we had the same sort of feelings after our Beagle , Tish passed away after a few years of Cushings treatment at the age of almost 15. That was 2 years ago and I still miss her but it IS nice to not rush home to give meds.

I'm so sorry to hear about your Koko. We have been grieving for our little Bertie, so we understand. We are going to try something new this year and make a Day of the Dead altar in his memory.

I'm glad that you will be doing the moon series. I plan to learn all about them from you.

That was an eventual week even if you didn't get the full impact of the storm. It is hard to lose a pet, that is one of the reasons we no longer have any, that and the fact that dogs aren't allowed on trails in national parks.

your sky is beautiful even though it's coming from an impending hurricane.

sorry to hear about your cat. i just adopted my second cat last week. it's an orange tiger and we named him BUSTER (for Posey). we thought we'd carry our affiliation down to our pets.

nice to know that both of us are skywatching and following our teams in the world series.

Sorry to hear about your cat. Pets are so hard to loose...but understand the relief too.

Thanks for visiting my Sky Watch at Texifornia, and so glad you found my blog! I'm starting to feel more at home here after 10 years but don't think I will ever be able to call myself a Texan (nor want to). We got stranded when we graduated after the Dot Com Burst (CA is so expensive, especially when you're not sure if you can get a job). Now we're rooted...my husband works at Baylor University, which offers free education to our three boys when they get to that age (they're young now), and that alone is worth staying here for, though he loves the job and would like to stay with it anyways. But, I understand about feeling "in exile." I even had a blinkie that I used in my signature of a forum I used to post on that said "California Girl Stranded in Texas." I had it up on Texifornia.com, and will have it there again once I get the time to fix all the code that was messed up when we changed servers. That's the site I had before I got the blog...kind of a silly outpooring of my homesickness.

Anyways, I added a link to Owls Farm on the "Texifornians" link list on our side bar. Your other blogs are fascinating (I'm gonna have to go back and read more)...but this one, with your "musings, mostly about place: topophilia, utopia, dystopia, geography, landscape, and home" seemed especially like something that would appeal to other Californians wandering out here in Texas.


Happy SWF! Have a good weekend,

My SkyWatch on WordPress