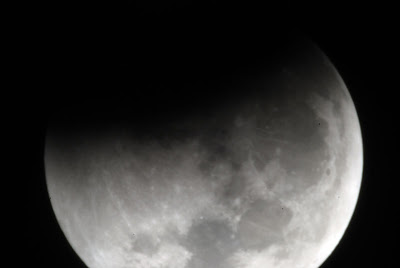 The best thing about enjoying one's birthday on the winter solstice (Robert Frost's "darkest evening of the year") is that it's important for reasons other than personal. This is the day of Sun Return on old Druidic calendars, Yule to Germanic and Scandinavian peoples, celebrated in the vast Roman empire as Saturnalia, and all manner of lively festivals among the world's peoples. This seasonal moment was considered so significant, in fact, that early Christianity appropriated it for Christ's birth day (Saturnalia occurred on December 25 of the Julian calendar). Tax collecting time in the ancient world tended to be in the fall, after harvest, and there's considerable dispute over the actual date.

So despite the fact that babies born around the Winter Solstice tend to lose out on the loot because of the proximity to Christmas, this birth date has its own specialness. Very occasionally, solstice babies are awarded with extra celestial goodies, as we were this year.

On the 20th I received this cute text message from my son: Happy early birthday mom! I assume you'll be staying up to see the present we all convinced the universe to get you?:)

And what a present it was, compounded by an ancillary gift from the Beloved Spouse, who had spent the day locating a lens and a device for marrying our digital camera to our telescope so that we could take pictures of a rare solstice lunar eclipse.

So we did stay up (well, until just at totality, when the clouds moved in) and this week's Skywatch entries include some of the results.

The evening of the 20th presented us with a pretty moon-infused sunset, through the now-bare trees: 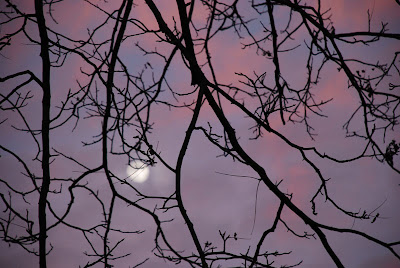 Before the eclipse started in the wee hours of the 21st, we got a good clear shot of the solstice full moon. Since we're novices at astrophotography, we ended up with too much image for the frame; the only complete shots were from the telephoto lens. The ones shown here offer a great deal more detail, however, and we're quite happy with our first attempts. 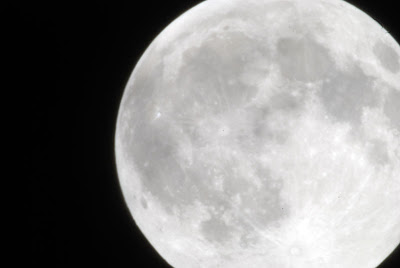 Just before totality--and in advance of some unwelcome clouds that cut our observations short: 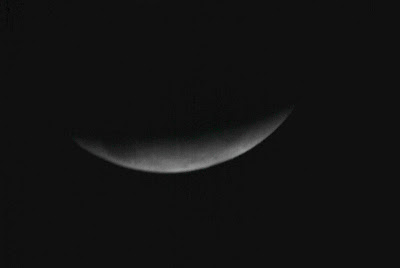 Of course, not all celestial portents are good ones, as the idiots prognosticating the end of the world on another solstice have warned us. But as I tell those of my students eager to seize on arcane meanings of ancient texts, truly the only thing of cosmic significance that will occur on December 21, 2012--is my 65th birthday.

Happy Winter, everyone. And Happy Yule, Merry Christmas, an enjoyable Festivus, to all.
Posted by Owlfarmer at 7:30 AM

Happy Birthday! My husband's was yesterday, and I wish I had thought to gift him with the eclipse!

Perhaps you can give us a lesson on camera/telescope photography some time.

A wonderful birthday present indeed. In the Great Valley the unrelenting cloud cover made it pointless to stay up. I suspect that even had I been in the deepest valley I wouldn't have seen it.
Have a great New Year.

A truly portentous marking of a very special birthday . . . Many Happy Returns, Candace - your family did well to honour you so.
Lovely photos, too, just by the way. Sadly, we saw nothing of the moon, though we knew she was there, coyly hiding behind the clouds.
The compliments of the season to you and yours and good wishes for a happy and rewarding 2011:-)

I am visiting all moon people. Greetings from Earth!

Brilliant... the telescope photography is going to be interesting!

The moon always has been a favorite subject of many photographers.. it is for me too... Nice captures...