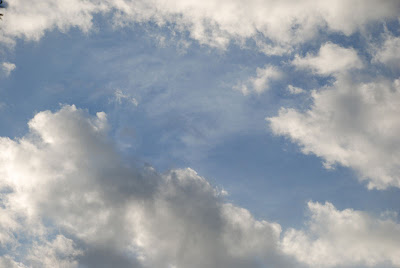 This is a shameful weasel of a Skywatch entry, but I needed to get two things done--put up a couple of the photos I took during our Thanksgiving break, and celebrate the news of "alien" life on earth found in none other than my beloved Owens River Valley.

First, the shots are nothing special, but they are evidence of the lengths I will traverse in the name of Skywatch Friday. The Beloved Spouse and I spent nearly two hours out enjoying the unseasonably balmy weather on November 24 waiting for a sunset. Enough leaves had fallen so that we could actually see the sky whilst sitting out in Grandma Clarice's old metal lawn chairs (which we'd had to move the day before because a huge branch was dangling overhead; once it fell, gifting us with a day's supply of firewood, we moved the chairs back). This is always the best place on the property to enjoy sunsets and the evening glass of Chateau Thames Embankment.

At any rate, I spent those hours wandering about and shooting up (ahem). But the longed-for sunset never came. The light, however, was luminous, and so the photos at least provide a record of a pleasant evening. The weather changed fairly dramatically the next day (and the Thanksgiving sunset, during which we were en route to our daughter's loft and therefore didn't photograph, was spectacular), and the leaves are pretty much gone. There will be a great deal of raking happening this weekend. 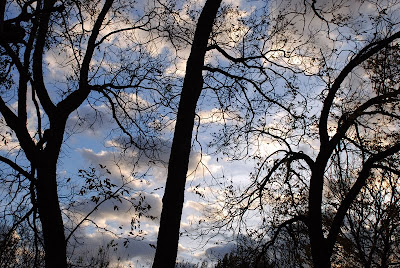 Far more interesting is NASA's announcement about a nifty bacterium found in Mono Lake, north of Bishop, California. The discovery of amazing biotic flexibility is the best news science fiction buffs have head since Sputnik was launched. It's such a big deal that the Daily Poop even ran the story on the front page, and we're not exactly known for our love of science around these parts.

Mono Lake (pronounced "moe-noe," not "mah-noe" as the newsies have been calling it) occasionally makes news related to the old Owens Valley water controversy (about which I've written in earlier posts on The Farm). For some time the water level lowered ominously due to the diversion of water to Los Angeles, and the seagull breeding site on a tiny island in the middle of the lake was threatened by coyotes via an emerging land bridge. In the '90s, however, efforts began to avert dessication of the lake and the demise of the gulls. Here's a good shot of the lake by Michael Gäbler: 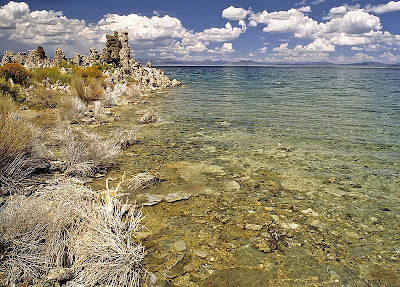 Skywatch Friday folks are probably already familiar with Martha Z's photos of the site; for some of these, see her Sunset at Mono Lake post from September 8.

The newest chapter in the Saga of Mono Lake just makes my little SF-loving heart go pitty pat. According to John Matson's article in Scientific American, a bacterium found in the lake uses arsenic (poison to life as we've known it) in the same way other life forms use phosphorous--in photosynthesis and other life-processes. The fact that one element can replace another in DNA like this opens up the possibility that similar replacements might occur to produce different forms of life than those with which we are familiar.

'This study really drives the point home of how adaptive life can be and that we should go out expecting the unexpected,' [astrobiologist Dirk] Schulze-Makuch says. 'If you look at other places, from the hydrocarbon lakes of Titan to the subsurface ocean of Europa to the deserts of Mars, we really should not underestimate the abilities of life to adapt to these places.'

Yum! There's just nothing to rev up the old creative juices like confimation that one's speculations about the universe have at least some scientific grounding. I have long (and boringly to my friends) insisted that life "out there" is probably (or at least possibly) very much different than it is here on earth. This confidence was sparked long ago by SF stories involving silicon-based life instead of carbon-based, and by thought experiments about what might have happened if that pesky meteorite hadn't plowed into the Yucatan sixty-three million years ago. It's hardly an original notion, but even though I've managed not to feel too smug about driving a hybrid car or not shopping on Black Friday, I will not hold back now.

To all the doubters and skeptics and people who've rolled their eyes and smirked, "there she goes again," I told you so!

I'm really happy for Felisa Wolfe-Simon and Ronald Oremland, who authored the study, and admire their curiosity and persistence more than I can say. But I'm even happier for those science fiction writers who have been inspired anew; I can't wait to see what kinds of "nowheres" appear as a result.

Image credit: Lakeside of Mono Lake, by Michael Gäbler, via Wikimedia Commons.
Posted by Owlfarmer at 8:35 AM

I'm grateful to know that you will continue to explore the implications of this discovery for us.

That second photo really speaks to me too!

You have high expectations for yourself! I think I myself would have chosen your 2nd pic for skywatch... Hey, next time, better! (although this was good enough for me:) )

In defense of that first shot, what I was after was an illustration of the (unfulfilled)expectation of something more spectacular; the second meant to illustrate the general loveliness of the evening in spite of the fact that my patience wasn't otherwise rewarded. I liked that opening photo mostly because it shows the layering below the high cirrus clouds and everything underneath, and because it reflects what I was seeing during the time we were out. As regulars may notice, artfulness is seldom my purpose.

I caught an interview with one of the researchers on Science Friday on NPR. It was interesting and of course I enjoyed the fact that it was found at Mono Lake, one more reason to preserve the lake.
I’m always honored to have my blog linked and I don’t even mind if people download my shots and use them as long as I get credit and the ego bust that goes with it.

I guess it's time to revisit Sirens of Titan, eh? :)