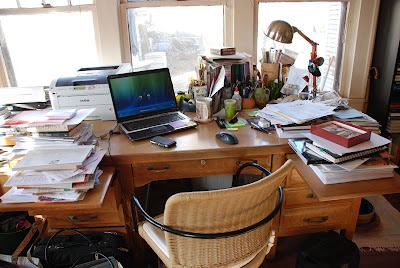 As time goes on, I'm finding it more and more difficult to get a handle on things. It's as if the flow is going by so fast that I when I reach into the stream, I only manage to grab a handful of water. Meanwhile, all sorts of detritus is washing up on the banks, and none of it makes much sense.

I keep trying to tidy up the house, but get distracted or run out of steam before anything significant gets done. The holidays weren't much help, because I spent most of my time off constructing a new course (Technology and Utopia) and updating the old ones. I began to wonder why the only thing I could accomplish was related to what I was supposed to be vacationing from.

During this last week, our "faculty development" period before the new quarter starts on Monday, I discussed the problem with a couple of colleagues, and we agreed that the combination of advancing age and an ever-increasing work load seems to suck the psychic energy right out of a person. And since I'm older than most of the people I work with, I seem to notice it more than they do.

Admittedly, I've taken on quite a bit. Nearly four years ago, when I started this blog, I was also participating in an online forum. I joined another when it became apparent that I'd have to have heart surgery again. The spin-off blogs (the Cabinet and The Owl of Athena) probably didn't expand the load because I soon realized that I wasn't going to be able to maintain them all with any regularity. Since then, though, my total output has diminished, and the forums are all but abandoned. I do wonder, as a result, how anyone who's on Facebook manages do do anything at all.

My selectivity toward social media has paid off to some extent. Not "doing" the Facebook thing (nor Twitter, which I find preposterous) may have been my wisest choice. I still keep hoping that if I can just get the course prep all snugged up, I'll have more time to write. I did, after all, manage to get a short story written in November for a contest I never entered. But while I'm teaching, most of my (remaining) little gray cells are tied up with the growing problem of engaging students who want less and less to do with what I teach.

If it weren't for the small number of adoring (and, I might say, adorable in their own way) current and former student acolytes, I might be tempted hang up my guns altogether. I'm pretty sure I won't end up watching soaps and eating bonbons all day when I retire, but the prospect of not teaching still seems more empty than enticing. Every now and then, too, I manage to come up with an idea that works with the over-connected generation, and that buys me breathing room.

As the new year rolled in the urge to organize increased: clear off the desk, get things in order around the house, and rid myself of distracting clutter. But at heart I'm still an archaeologist, and the piles of stuff represent layers of discovery--strata that I can carefully mine for scribbled notes and pages stuck into stacked books that record ideas gleaned from the op/ed pages of the newspapers I still make time to read. There are useful artifacts to be discovered, deposited during decades of enjoying the life of the mind. The spirit is still willing, at least until the flesh poops out.

One tangible result of having accumulated the thousands of books, piles of notebooks, and collections of tear sheets from magazines I've managed to recycle, is that constructing the new course has been an adventure in serendipity. One day I walk by a bookshelf and my eye lights on a book I haven't picked up in years. I sit down to leaf through my marginalia (few books I own aren't marked up with comments and my personal set of hieroglyphs to indicate important passages) and rediscover something useful. Or the end notes in an essay lead me to other forgotten works that reveal further fodder for the course. And so it goes.

The slow, episodic excavation of what amounts to an intellectual midden has allowed the new course to evolve into a reasonably organized, well-focused introduction to philosophy and how it works, as well as how we can use it to understand an increasingly technologized world. I get to ask my students to wrestle with questions I wonder about all the time, and I'll probably learn a great deal from their contributions. If the course numbers hold through today (fourteen), I'll get my first real seminar in sixteen years.

I've begun to think of my desk as a metaphor for my brain: it seems to be muddled, but it has its own internal coherence and logic. I still have to clear it off and sort things out, but that's the kind of cataloging process I love--and it may enrich the new course even further, as I uncover more forgotten bits under layers of more recently encountered material.

As an added bonus, by Monday I'll have opened up enough space to hold the new piles that are sure to build up over the next eleven weeks.
Posted by Owlfarmer at 12:39 PM

Your new course sounds fascinating, had my brain not atrophied from years of underutilization it would be the kind of course that would tempt me. Of course, nothing would tempt me to live in Texas.
I emailed the syllabus to my son. Once upon a time he had hoped to teach the history of technology but life got in the way; now his focus is on earning and saving as much money as he can to insure that his disabled son is always cared for. The philosophy books have been laid aside to make way for technical books on programming.

A new year, a new quarter, I wish luck to the both of us.

I so... know the feeling.
There IS a solution: be married to a tidy considerate person.
And they may even do the washing up as well as tidy.
I am feeling so guilty now....
Not?
Know what?
It is a disorder.
so I tell myself.
Related and part of dislexia.
Well, that's my excuse anyways.

I came for skywatch but ended up here somehow.
jo

I read this post back when you first published it, and have been smiling about it ever since--something about the thought of you, drifting through a room and mining up past thoughts and ideas. Oh, leave the tidying and dusting to those who like it. We have few enough thinkers like you.

I am lovestruck by your phrase "intellectual midden." You've made my own mess seem much more glamorous, at least in my own eyes.