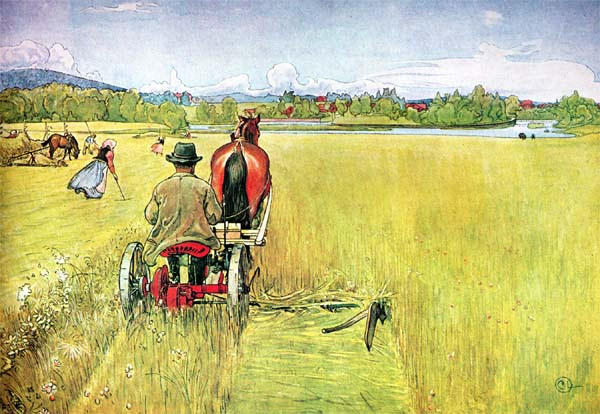 It all started with a romp through my blog roll, trying to catch up on what other folks were doing. I tried to go through the list again this morning, to find out where I'd gotten the link, but couldn't find it. So the credit ends up going to Stan Cox himself, whose book Losing Our Cool: Uncomfortable Truths About Our Air-Conditioned World (and Finding New Ways to Get Through the Summer) opened up yet another path of inquiry for The Farm.

I've actually dealt, obliquely, with the topic of air conditioning (or the lack thereof) on this blog in the past (there are some eleven posts that mention it; use the search field if you're interested). Always interested in folks who share my concerns, I bought the book for the iPad. Before I'd finished the first chapter, I'd decided on a new series of posts about civilization and its discontents, roughly organized around the four ancient elements: air, earth, fire, and water.

Before I begin the musings, however, I wanted to acknowledge the many bloggers and other writers whose work continues to fuel my own, and who provide me with philosophical support. Some of these, like Wendell Berry and Herrick Kimball are grounded in the Christian agrarian traditions associated so closely these days--accurately or not--with our Founding Fathers (only some of whom were farmers). I've been reading Berry for twenty-five years and make sure I buy his books in hard cover as much as possible because they get re-read frequently. He's decidedly not fond of digital technologies, so eschews the blogosphere--but that's fine with me. Kimball, however, whom I've only recently discovered, has a whole slew of blogs. My favorites of these are The Deliberate Agrarian and Agrarian Nation (which inspired the title of this post).

Reading Kimball's most recent articles on Agrarian Nation sent me back to the iPad, because one of the first things I did when I got it was to download all the old-timey cookery books and home-keeping volumes offered in the Free section (through Project Gutenberg). These include luscious stuff like Things Mother Used to Make: A Collection of Old Time Recipes, Some Nearly One Hundred Years Old and Never Published Before (1914); The Healthy Life Cook Book (second edition) by Florence Daniel (1915); Culture and Cooking, or Art in the Kitchen by Catherine Owen (1881)--and more. No doubt I'll be able to scare up even more on Free Books, but haven't yet taken the time, probably because I'm too busy reading interesting blogs where other people introduce me to even more old stuff.

I also read a considerable amount of material on Peak Oil (The Oil Drum, ASPO), including Sharon Astyk's blogs (Casaubon's Book and The Chatelaine's Keys) and books (Depletion and Abundance, A Nation of Farmers). The combination of technical discussion on what I really think is going to happen at some point in the not-too-distant, perhaps-even-before-I-die future, and Astyk's comments and advice (as well as the stuff she links to) is almost enough to keep me busy all of my waking life. Unlike Berry and Kimball (as much as I admire their work), Astyk's perspective resonates with me because she's Jewish, a woman, and unerringly practical.

While I'm on the topic of practical advice, I would be grievously remiss were I not to mention Ruth Stout (just Google her), and Helen and Scott Nearing. They are all, alas, dead now, but their legacies live on thanks to the digital universe--at least until the grid goes down.

No paean to self-reliant agrarianism would be complete without mention of The Mother Earth News and the Whole Earth Catalog, both mainstays of my early leanings in this direction. You can now get almost the entire run of TMEN on CD (1970-2010), cheap (60 bucks). Somebody on eBay probably has the whole thing in paper. In an unpublished short story I wrote a few months ago, an entire community manages to survive after an EMP because somebody had squirreled away all her back issues.

Many years ago, in a graduate class called (I think) "The Future As Present," we were asked to give an oral "book report" on a publication we considered essential. One of my fellow students almost caused our instructor to enter a monastery (or at least to retire early) when she reviewed David Macauley's Motel of the Mysteries. I didn't help matters when I chose the Whole Earth Catalog. The inspiration of this particular choice was a sort of vision of having a copy of the WEC on hand when the apocalypse came. See? I was thinking ahead even twenty some-odd years ago.

I'm looking forward to looking outward for a while. I've been so internally focused on my own discontent for far too long. And the weather has been great, my garden is beginning to flourish, and I'm getting way too comfortable. The first essay, on Air, will show up as soon as I finish Stan Cox's book and get my notes organized. Meanwhile, I heartily recommend his book, and the stuff I've linked above.

Image credit: I couldn't resist a bit of artistic nostalgia here. After searching on the Commons for historic agriculture photos, I found one of Carl Larson's sweet paintings of farming in Sweden.
Posted by Owlfarmer at 7:58 AM

I look forward to your musings.
I must say you are already having a bad influence. I find myself collecting dishwater and water from cooking and some hand washing and using it to water my ornamentals. Even the occasional bathwater finds its way to the garden but only fresh water for the vegetables.
I shan't give up my air conditioning though, but with the solar cells on the roof and keeping the thermostat higher than most we manage to roll the meter back in the summer. (It helps that we spend so much of the summer in the Sierra.)

Thank you for your fascinating links. I'm always looking for new inspiration and despite Sharon having a tremendous ability to write inspiring pieces I need more inspiration that she alone can provide.
I came across the Nearings first through Helen's cookbook, Cooking for the Good Life. Absolutely fascinating. They seem to have been a family that ate mainly to refuel rather than for the sensual pleasure of eating. I've never cooked from it but it was a wonderful introduction.
My first inspiration in this direction was John Seymour's 'The Self Sufficient Gardener' which led me, via his other books to a wealth of books about living more simply.
Thanks again
Yvonne