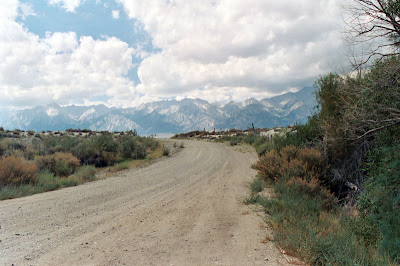 Many human creation stories start with dirt, with our having come from the earth. The god of the Judaeo-christian tradition makes the first man from Eden's red earth and names him Adam after it. Native American stories from the Southwest see the attachment as more communal in the sense that human beings as a whole emerge from under the ground, making the earth a literal home. The small depression called a sipapu in Basketmaker pit houses and their descendents, Pueblo kivas, symbolizes this emergence; and the houses themselves are partly dug into the ground, providing a physical connection between earth and sky. At any rate, this is my excuse for starting with earth, rather than air, in this series of (be)musings.

In the modern world, connections with the land seem to have taken on the cloak of commerce. The preoccupation with "property values" has little to do with anything but finances--nobody's really talking about moral value. Around here, a common practice after the tax bill comes is to refute it, and the newspaper always includes advice on how to challenge your home's "value" on the tax rolls. Never mind its worth to one's family, and to life and memory. But this makes a certain amount of sense in a world where housing has more to do with status and fad than with the idea of home, the art of architecture, and the building of stable, sustainable communities.

When white folk decided that manifest destiny decreed ocean to ocean occupation of what became the United States, we took over other peoples' homes, evicting them from their property, and imposing an alien culture on land that had been sparsely but deeply occupied for thousands of years. And then we began building in places that most sensible natives wouldn't have chosen or, if they did, they would have been acutely aware of the danger of doing so and built accordingly. So upstart Europeans decided that they liked living by rivers, on bluffs overlooking the sea, in balmy climates, and other spots where nature periodically unleashes catastrophe in the form of floods, earthquakes, landslides, hurricanes, tornadoes, and the like.

Some people try to mitigate the effects of natural weather extremes by building houses on stilts, or by creating tornado shelters, but many more don't. Some accept the possibility of disaster as part of the cost of living along the Mississippi or in the earthquake-prone regions of California, or along the Gulf coast, but many more seem shocked when inevitable natural processes finally catch up with them.

Sometimes we can prevent disasters by building and planning wisely, but more frequently, it seems, desire gets the better of us, and we build unwisely, we over-graze, over-build, over-plant, or otherwise abandon common sense for reasons of ignorance or general lack of wisdom.

In west Texas this year, the juniper forests that had grown up over former ranch land (where cattle and selective burning had kept the problems at bay for generations) exploded into wildfires that destroyed thousands of acres, and hundreds of homes. The desire for shade in a hot climate meant that the well-adapted junipers were cultivated and encouraged; few seem to have paid attention to the chemical properties of juniper species. As one article on fire prevention in Nevada notes, "Firefighters often refer to ornamental junipers as little green gas cans."

In much of Texas, prairie grasslands have been replaced by the heat- and drought- tolerant junipers, and in some areas have been left ungrazed in order to conserve the land. However, as land gets sold off and parceled out to developers, fewer preventive measures are taken, and people end up living in a tinderbox.

Fire-climax vegetation such as juniper, chaparral, and pitch pine has to be carefully managed if people are to live on or near it--but human beings cling stubbornly to the notion that they can build any damned place they want to, only to weep at the loss when the inevitable overtakes them.

There are, in fact, few places that don't come with some kind of potential disaster attached. But some places practically beg for catastrophe because they're built up in areas that just aren't suitable for huge populations, such as Los Angeles--laid out as it is on its net of earthquake fault lines and with little in the way of water resources--or seaside communities with nuclear power plants in eastern Japan, or cities in Florida built on drained everglades and lying in the path of frequent hurricanes. Smaller populations or wiser fuel sources might well mitigate some disasters, but we insist on being stupid and ignoring probability.

In cultures where earth is seen as sacred, and viewed as the mother of us all, populations have traditionally remained small and people tend to know their environments much more intimately than the city- and suburb-bound throngs of Americans that pile up in cities. I actually don't have that much against cities (because concentrating the humans in smaller areas leaves more land open), except when they're inappropriately located. Cities might also have a deterrent effect on some kinds of weather (such as tornadoes), and localize damage rather than spreading it out over large areas as the recent tornado cluster in Joplin, Missouri did. The notion that tornadoes don't hit big cities is based on bad understanding of what tornadoes do (as this list of myths about these storms form The Tornado Project indicates), but urban sprawl does mean that more populated areas are subject to potential damage from big storms.

In my last post, I proposed a series of discursions on earth, air, fire, and water--but realized almost as soon as I started taking notes that one really can't consider any of these ancient "elements" in isolation from one or more of the others. Add in the related concepts of heat, drought, wetness, and cold (plus aether, the quintessence), and the whole project gets even more complicated.

Fortunately for us all, Richard Hamblyn has written a book, Terra: Tales of the Earth, Four Events that Changed the World, a much more ambitious exploration of the formative effects of natural disasters on modern conceptions of such things. The link is to Jonathan Keats's October 2009 review in the London Telegraph, which itself provides some interesting context.

So I'll continue my elemental meanderings, but don't expect anything too profound given the end-of-quarter load, the onset of summer home-improvement efforts, and my own ongoing struggle to cope with dirt. Meanwhile, I'm off to a bookshop to see if I can snag a copy of Hamblyn's book.

Image notes: This is my cheesy effort to link this post to Skywatch Friday, which I visit all too infrequently these days, but is a wonderful place to see skies from all over theworld. The photo was taken in 2004 in the Owens Valley. The dirt road seemed an appropriate illustration for the topic, but the sky dominates--as it usually does in the Valley. Just another example of how hard it is to separate the elements. The four elements representation is from Wikipedia, because I was too lazy to draw one myself.

Posted by Owlfarmer at 8:56 AM

Hiya,
This post requires more time and patience than I can muster at the minute :-)
I shall come back later and try to take it all in.
I am so intrigued how William Morris, him of wallpaper and Kelmscot Manor, fits into your inspiration.
So I shall have to come back to puzzle that out :-)
[1jo.co]

I took the time to read your article, and found it very deeply interesting and full of facts.

I also think the picture of earth and sky, and the road leading somewhere is perfect for your thoughts and passion.

Ah, the Owens Valley ,where Los Angeles goes to get a drink of stolen water.
Poorly planned urban sprawl is indeed the Southern California way or getting on with life, just move over (Oh excuse me while I squash you and yours)and build some more sprawl!
Our Brush fire season (awful when you have a "season" )has just begun and the hillsides & deep canyons are covered with Manzanita,Creosote bushes,scrub pine all full of oily sap from a rainy Winter just waiting to spark and crackle in the Santa Ana winds.
I have not been up toward the Southern Sierra in a long time , I think I may take a drive up there this Autumn.
Thanks for the lovely inspiring photo and as always a thought provoking post!

Enjoyed many of your posts on this blof and others. You must keep pretty busy.

fascinating information and a wonderful photo...thanks so much for sharing your knowledge.

I'm glad you posted to SWF, otherwise it's more than likely I wouldn't have found you. your post is a good read. the state of affairs you address has caused in me a detachment that I have yet to decide if it's good, bad, or perhaps just necessary for emotional survival. most times I don't even want to think about our predicaments, so create a small world to try and keep the big one out. I've been believing for awhile now that the only possible outcome will be complete and total destruction and ultimate rebuild from the ashes up. and then it would likely begin all over again...
on a lighter note, nice dirt/sky/clouds shot.

Lovely photo! I want to walk along the road and see what lies beyond the curve in the road!!