The Sage of Midlothian 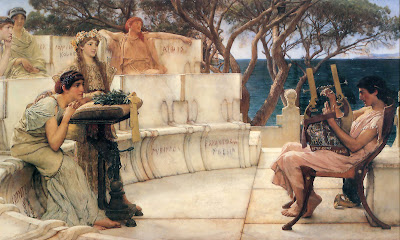 I wrote this a couple of weeks ago, but shelved it for the Elements series; see the addendum, below, for why I've inserted it now.

The good news is that Tom Dodge now has a website. I'm not sure how long he's had it, but it's about bloody time.

I first "met" him, and his sonorous Texas twang, in the late '80s (I think) on the local public radio station where he occasionally holds forth on topics that interest him. Many years later I happened upon a copy of his chapbook of translations, A Generation of Leaves: Greek Lyrics of Love and Death at Half Price Books and read them cover to cover in the store, before I snatched up the little book and carried it home--still amazed that this was the same Tom Dodge. After all, as erudite as he sounds on the radio, he comes off as more of a cowboy poet than a philologist.

Not many people anywhere translate ancient Greek poetry any more. I do it in my spare time to keep up my Greek chops, but I have always fancied myself a Classicist at heart despite my meandering academic career. Never in my wildest dreams, therefore, would I have imagined that this denizen of Midlothian, Texas was also a fan of Simonides.

I especially love his rendering of the little Sappho fragment I have my Humanities students translate, using a trot. After they struggle through the process of transmogrifying a literal translation into a poem, I show them numerous other versions from over the centuries, but Dodge's is one of the best:

The moon has faded,
the Pleiades dimmed;
it is midnight,
the watch passes by,
and I sleep alone.

It's comforting for exiles like me to know that we're not stuck in a complete wasteland, and over the years he's helped in my project to learn to love the prairie.

More recently he eased back into my consciousness with his lyrical review of the Library of America's new edition of Kurt Vonnegut's work, Kurt Vonnegut — Novels & Stories 1963-1973.

Lovers of Vonnegut, especially of his early work, will automatically love this book (and buy it, even though we already own the whole oeuvre, just because it's edited by the venerable Sidney Offit), but Dodge's review will undoubtedly attract new readers (if, of course, anybody actually reads the book reviews in the Daily Poop).

Over the years I've taken every opportunity available to get students to read Vonnegut: Player Piano in a course on philosophy of technology, Galápagos in "Technology and Utopia" (although I left it out of my most recent version of the class; I think I'll put it back for the next time I teach the class). If I ever teach a science fiction segment of my ever-popular (ahem) philosophical perspectives class, it'll be hard to choose a single Vonnegut work to include.

So, with Vonnegut and many like-minded others of his G.I. Bill-educated generation gone now, a cultural revolution financed by the dividends of peace seems but a romantic schoolboy’s fantasy. But each time a Vonnegut collection is printed, each time someone quotes from one of his books, the aging schoolboy’s faltering heart races, if but for a moment or two.

Thanks, Mr. Dodge, for the memories. And the poetry.

Addendum: Today's Daily Poop featured another of Dodge's reviews, this one on Roy Blount, Jr.'s Alphabetter Juice: The Joy of Text. In his introductory paragraph, Dodge has this to say about himself:

Full disclosure. I am a philologist. I guess I have known for a long time, as the signs were always there. But nothing in my background pointed me in that direction. I have no relatives who were, no ancestors either, as far I know. No one personally influenced me and I had no role model.

Image credit: Good old Romantic Lawrence Alma-Tadema again; this time it's Sappho and Alcaeus (1881) via Wikimedia Commons.
Posted by Owlfarmer at 8:29 AM

I've never read any Vonnegut but think I shall have to.