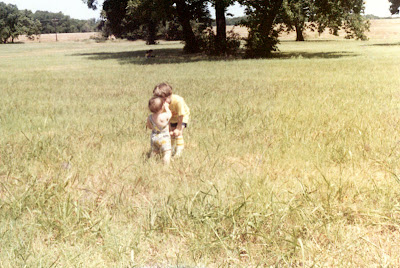 Anybody who ever reads the Farm is probably sick to death of my grousing about the weather. Last winter I was fussing about how Texans don't know how to handle snow (a fact that lead to abnormal numbers of missed school days), and for the last several weeks I've been on about the heat. My comment du jour is "I made it through the summer of 1980, with a one-year-old, a four-year-old, and a VW bus with no air conditioning." I think I even had a tee shirt proclaiming the fact.

And we did survive. The four-year-old is now 35 (living in Seattle, where the temperature doesn't seem to have risen past the mid 70s all summer), the one-year-old recently turned 32, and the bus is long gone (most recently replaced by the lovely hybrid Vera, whose mileage is down to 52 mpg, apparently because of the heat). Mind you, in those days we had a well air-conditioned tract house, in contrast to the ageing bungalow with virtually no A/C the Beloved Spouse and I have occupied for the last decade, and I had no garden to speak of. Now, the potager that showed so much promise last spring looks as if someone did it in with a blow torch, and the lawn is a lovely shade of straw.

Of course, I'm not the only one harkening back to 1980. Daily Poop columnist Jacqueline Floyd is ten years younger than I am, and wrote this week about trying to survive that summer as a college student in Austin--pointing out that poverty is one of those conditions that weigh more heavily when the weather turns surly. My lack of air conditioning stems from my own philosophical peculiarities, but it's a choice. Many in this country are suffering deeply (and, yes, dying) because they can't afford the luxury of chilled air.

The "wallpaper" that currently occupies my computer desktop features a bulldog snoozing on a pile of ice. It makes me smile, and keeps my crankiness level lower than it might be. But since warmer temperatures are forecast for the future, it occurs to me that we really ought to start adapting to the change.

Training ourselves to endure higher thermometer readings is not only plain common sense, but it ends up having economic benefits as well. Setting the thermostat at 78 F or higher actually helps prevent rolling blackouts when the grid gets overloaded. Limiting the amount of energy we use not only saves money, but lowers the amount of particulate matter that enters the atmosphere and causes at least some of the warming.

It's likely that high-temperature summers will increase over the next decade, and unless we develop ways to rely less on energy-sucking technologies, we're going to find ourselves in a pickle--or pickling ourselves in the heat. But yesterday, as I walked around in the garden, surveying the damage, I noticed that as long as I wasn't taking the full blast of the sun I got used to conditions pretty quickly. Sitting under a tree wasn't nearly as unpleasant as I'd thought it would be. Granted, the kitchen's too hot for comfortable cooking, but if I stay there only long enough to fix a casserole that can cook itself (we have a well-insulated pizza-sized oven in the range that heats up quickly and doesn't let much of that escape) or throw a nice salad together, it's not unbearable. And then I get to go sit in a cool room and use my sweat to cool me off.

We've become a nation of sissies. We work in over-cooled offices and buildings where workers have to don sweaters to keep from getting a chill; we drive our cars with thermostats set at 70 F and then wonder why it's so bloody hot when we emerge from our commutes.

I'm here to tell you that if you set the car or house at 78 or 80 (and put the air flow in the car on recirculate), it's much easier to tolerate exterior temperatures. And even though 86 degrees overnight doesn't make sleeping very comfortable without air conditioning, it's quite pleasant in the morning, out of doors with a bit of breeze, a cup of good coffee (or a glass of iced tea), and a newspaper.

But the heat's no joke in the long run. This week we're set to break the 1980 record of 42 consecutive days registering over 100 degrees. The dogs are shedding what little of their fur they have left, and the birds walk around looking scruffy, "panting" with their beaks open. With heat comes drought, and water restrictions, so there's only so much I can do for them. I freshen the bird baths every morning, and water when I can (Mondays and Fridays before 10 am and after 6), but it's not doing much to keep the plants alive.

I do hope that eventually alternative ways of cooling us down--ways that don't involve building more nukes, burning more coal, or frakking for more gas--become viable. In the meantime, I guess I'll just order the new tee shirt: "I survived the summer of 2011."

Image note: The photo was taken near our house in Plano just before my son embarked on his first summer day-camp experience in 1980.

Posted by Owlfarmer at 6:35 AM

Perhaps we should adopt the habit of wearing long flowing robes rather than trying to strip off to keep cool - with unfortunate consequences for onlookers, in some cases, when more flesh is revealed than is either wise or attractive.