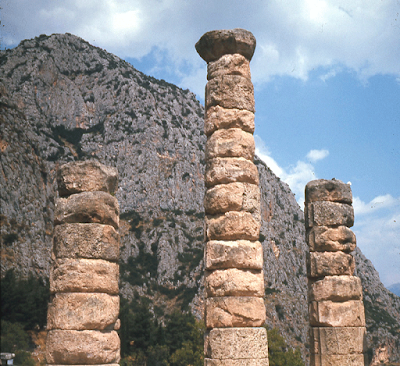 Temple of Apollo, Delphi
Forty years ago this summer, I took my first and last extended trip to Europe. Initial Spouse and I joined a charter flight from Penn to London, flew to Paris, took a train to Rome and later Naples, embarked for Greece from Brindisi on a ferry, disembarked at Patras, toured the Peloponnese by train, spent a little time in Athens, took a boat to Crete and back to Athens, flew to Rome and then to Copenhagen, took another train to London, and then rejoined the charter home to Philadelphia. We left in late May with $1200 in travelers' cheques (with prepaid Europasses and flights from Rome to Denmark), and returned on August 16 with about $600. Talk about frugality.

Last week I found the diary I kept, with painstaking notations about every bloody penny we spent. I have dim memories of hostels and roach-infested D-class hotels, lots of bananas and bread, and never-ending searches for cold milk. Fortunately for our pocketbook, I hadn't yet acquired a taste for wine, but by the end of the trip I'd become a connoisseur of Retsina and Danish beer. The best food was Greek (especially at one taverna at Pylos, where the proprietor led us into the kitchen to pick out our meal), and also the cheapest. That, (and the fact that at two different universities I had incredible instructors in Greek cuisine, both Greek wives of Classics professors) undoubtedly accounts for my abiding love for all food Greek and Mediterranean.

Caught subway to Liossion St. bus station (w/in a mile of it, anyway) which isn't really on Liossion St. but we found it anyway. Got to the station at 7:15 & got the last 2 seats for the 8 am bus. Some 4 hours after the bus left we got to Delphi--after the bus had to stop in driving rain so the conductor could tie a tarp over the top. It was reasonably clear at Delphi--we got caught in a brief downpour that lasted about 3 min. and that was it.

A little note on synchronicity (about which we've been talking in the myth class): Delphi was on the menu for the History of Art & Design I class this week, including the following sites:

We went first down to the area of the temples of Athena Pronaia and the Tholos. Not much left of the former 2, but they've set up three of the columns of the Tholos back into place and it looks quite nice.

Scribbling in the diary I didn't pay much attention to style. Lots of things were apparently "quite nice." We were also having camera problems (had been since Mycenae), but it seems to have been working here--which is why I've got these photos.

Then we went up to the main precinct and spent most of our time looking at the major stuff--the Treasury of the Athenians, the Stoa of the Athenians, Apollo's temple, the theater, and the stadium. Tim took off to look at some other things & I sat & meditated near the navel. 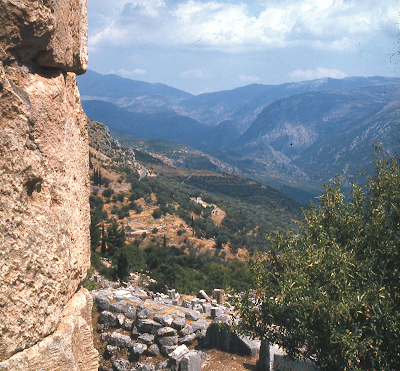 View from near the Omphalos, Temple of Apollo, Delphi
We went on to the museum to see the Charioteer (it was "nice too"), which was responsible for my having gotten into Classics in the first place, via Helen MacInnes's potboiler, Decision at Delphi. I guess we weren't allowed to take photos, else I'd have had at least one shot. (We were also stingy with our film.)

Another dim memory of the trip to the site involved holding a chicken for a lady who had too many to handle, but that didn't make it into the diary.

View of the Gulf of Corinth from Sanctuary of Apollo, Delphi
I used my new scanner to get the photos for this week's Skywatch Friday entry; they're a bit scratchy and I had to do some minor cropping, but I think they're rather lovely (or "quite nice"), considering my then-youth and inexperience. I was, after all, only 24 at the time--still an infant.

The marriage ended a year later, and I've only been as far as London again since. But the trip provided a formative moment in my life, and I'll always be grateful for having had the chance to visit Greece before it fell into such disrepair.

I hope everyone's surviving the heat, which now seems to be affecting almost the whole country. Locally, our only hope for change any time soon lies in the small possibility of out-fall from Tropical Storm Don. Otherwise we're on track to break the 1980 record.
Posted by Owlfarmer at 9:12 AM

What an incredible trip that must have been! Beautiful shots!

I know what you mean about this "soon to be legendary summer." I wish the heat would STOP. I don't remember if the picture with clouds was the day we got rain...that was such a blessing. But that's been the only rainstorm since June. Gotten a few other clouds but not anything to diminish the heat. My three boys are going stir-crazy.

How "nice" that you have your diary and photos to help you remember your youthful experiences. A friend recently sent me a letter that I had written to her in 1975. I learned things about my family that I had long forgotten.

The blue of the sky against the ecru of the columns is very nice. I hope Greece recovers from this difficult time. It is still on my list of places to see one day.

It really is wonderful to sift through ones own past now and again,thanks for sharing these with all of us.
I have been watching the Weather Channel at night and I am cheering TS Don along for all my Texas friends,sure hope he delivers.

Nice to know that you can still travel on a shoestring budget. I feel better about making it to Europe one day

These are spectacular photos. I can almost imagine myself there. Thanks for sharing them and your experiences!

Great pics of Delphi! I only made it to Athens -wanted to go to Corinth, but no time left. All of my life I wanted to see the Acropolis (love art history), but it was a disappointment (as was the Mona Lisa) -maybe I'm too present-driven to worship the past, lol! Happy I found your blog!