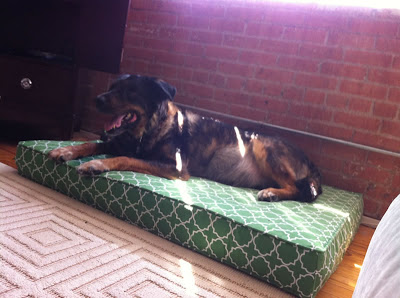 Dogs are such a part of the good life for human beings that I can't imagine not having them around for any length of time. When we lose one we lose family--and some family are harder to lose than others.

Such is the case with Homer, my daughter's version of "Marley," who for a couple of years made us crazy, but then, when he finally felt safe and "at home" became the happiest, goofiest dog I've ever known. 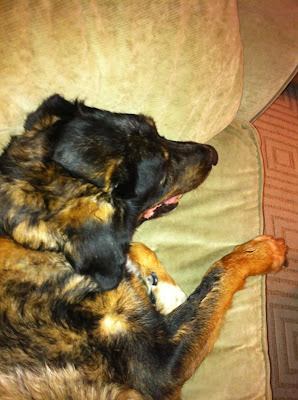 Well, Homer died yesterday, after a long illness. Rather than telling the story myself, I'll let her do it. This is the letter she wrote to the adoption agency after he died:

I just wanted to inform you that Homer, who I adopted 5 years and 8 months ago, passed away peacefully yesterday at the age of 9-ish.

He had been diagnosed with Leiomysarcoma (cancer of the smooth muscle tissue) in November of last year. He had surgery in December to remove the tumor, however it was too intricately entwined with his ureter and too close to his spine for them to be able to remove it. We went home with Homer on "pallative care", with the vets only expecting him to live a short time. My sweet boy held on for almost 9 months. 8 months and 30 days to be exact... He was a fighter and loved his life so much he didn't want to let go. My vets were all amazed by his attitude and his determination to keep on keeping on.

Sunday night he could hardly walk, and by Monday morning he showed me in his own special way that it was time. He was tired of fighting, and he was ready to let go. Two of his favorite aunties and my boyfriend came over to say goodbye, and we all loved on him for a long time before we took him in. His passing was a true testament to his life - he was pure love down to his last breath. He was surrounded by love, and even my vet cried. He actually had to leave the room afterwards because it was too much for him. For a dog to have that much of an impact on a vet speaks volumes about Homer's personality and gentle soul.

I just wanted to say thank you for saving him, and thank you for keeping him until he picked me as his mom. I loved him so much, and he changed my life.

He was the best dog in the world, and when I am ready for another dog, Lexee's is the first place I will look.

It's fitting, I think, that Homer is still the "poster dog" on the Lexee's Legacy home page.

We'll all miss him, but I can't tell you all how proud I am of my kid, who took on a task that many had already refused. But the only thing she refused was to give up, and Homer gave us many happy years as a result.

Image notes: These are the last two pictures Esther sent me of Homer; the opening shot was taken the night before he died. For things like this I'll be eternally grateful that we've now both got iPhones.

Posted by Owlfarmer at 1:35 PM

What a beautiful tribute to a very special and determined dog. I think it not foolish to say that he was just waiting for his special person, your daughter, Esther, to adopt him. He will have left an enormous hole in her life and the lives of all those who loved him. It is superfluous to say that he will never be forgotten. There will be another for her, not the same, for they are all different. I wish her joy when the time comes that she feels ready to seek another canine companion.

Somehow I knew you would be the first person to respond--and you know better than most how tough it is to lose a beloved dog. Thank you for your sweet sentiments; I'll pass them on to Esther.

Sorry a beloved member of your family has passed on. We just lost our beloved four year old cat, Creepie, who was more than just a cat or a pet, but a best friend, last week after a sudden illness. We just adopted a 1 1/2 yr old cat who is very similar in temperament to the one we lost as a means of recovering from the sudden loss (Creep was classified a service animal by my husband's psych as a means of therapy for bipolar & other psychological disorders). Taking care of Creep gave Chris purpose but Creep also gave back by taking care of him & loving him unconditionally.

No amount of preparation or words can make the hurt any less but we wish Esther strength & peace as she deals with Homer's passing.

My condolences to you and to Esther ,what a great Dog-mom to write such a love filled tribute. Homer sounds like a very special soul.