It seems as though I spend a great deal of time these days looking up: for clouds, signs of rain, tokens of impending change. But I'm tired of writing about the weather. It rained last Friday, providing a steady, sweet, cool respite from the heat that lasted for about an hour. The temperature fell to a balmy 103 F in the days that followed, and it should only get up to 101 today, according to the weather sources that have been wrong more often than not. From now on I'm only going to rely on the approaching equinox to signal change.

But not thinking about the weather leaves mental space for worrying about civilization and its discontents: war, famine, politics, economics, environment, health, education--with all their creeping dystopian possibilities.

So lately I've been taking refuge on a different planet. One called Phoebe, where the protagonist of my latest "old bats in space" saga (Petunia) has just disappeared. She finally reached that point after I'd spent several months thinking about how to get her there, and after I'd spent another several hours rereading what I'd already written and filling in the missing bits. None of this is for publication; rather, it's my own escape from here and now and a means for imagining alternatives to what ails us at the moment. Writing this stuff is fun, and Petunia's having fun, and it beats drinking as an avoidance mechanism.

I've also got several reads going: books that run the gamut from Sayonara Michelangelo by Waldemar Januszczak, to The Atlantis Syndrome, by Paul Jordan, to Robert Charles Wilson's latest, Vortex and John Scalzi's engaging but silly newest book, Fuzzy Nation (both just finished). Some of these I'm reading for my classes (Januszczak and Jordan), so they sort of count as work, but I don't actually have to read them. I do so mostly so that I don't deliver the same stale stuff over and over again and can add fresh material to my stand-up art history and mythology routines.

But I won't be able to avoid the real world for much longer, so for anyone who's interested, here's what's on the Farm menu for the near future: musings on cucina povera (fancy Italian for peasant food) and utopia, energy options, food deserts and obesity, creating an oasis, and coming to terms with advancing age. Probably not all at once, though.

In the meantime, here are this week's Skywatch Friday entries, all taken with the new iPhone (but not the Camera+ app, which I'm still trying to figure out how to use properly) in the early morning during the last couple of weeks. The bottom two were shot in parking lots at or near school. 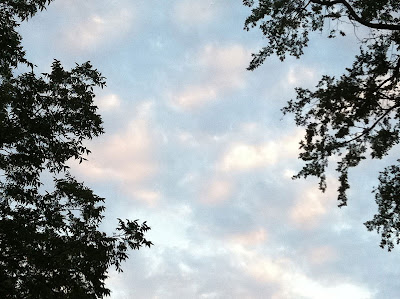 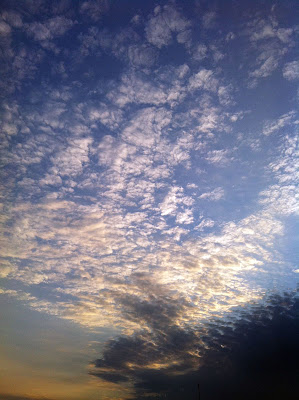 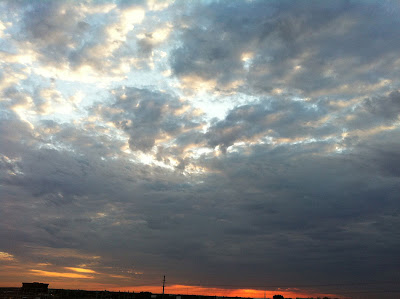 For those who celebrate it, happy Labor Day weekend. But please take a moment to remember what it represents. When asked, none of my students knew. Their most frequent response was that it has something to do with having to go back to school. Sigh.

Posted by Owlfarmer at 9:15 AM

I feel Petunia and her adventures on Phoebe should be introduced to the wider world.

It is a pretty damming commentary on the state of our nation that none of the students (nor anyone I asked today) knew WHY we have a Labor Day holiday!

As a history major myself and just as a common citizen who has worked hard and earned their pay while seeing others also work hard and not reap the benefits due to unjust labor practices and hiring practices all I can say is that which we do not remember we are doomed to repeat.

On a brighter note how are you liking the Scalzi book? I was introduced to him this Summer at a Convention in Phoenix,he is a really witty,funny,nice person. One of the reasons I travel with my daughter & son-in-law is that often their fans are people who I am very pleased to meet as well. The Sci-Fi/toy/comic artist world is pretty small in real life but very large on the internet year 'round,kind of like a Tardis,much bigger on the inside!

Janice: Maybe someday I'll pop Petunia's story up on the More News From Nowhere site (along with another story that I'm actually thinking of sending off to Asimov or some such). When I've got more of the story together, however, I'll send you a copy of the text.

Ubie: The Scalzi book was cute, warm, and fuzzy, but not as good as the Old Man's War series, or his earlier Agent to the Stars (my favorite). I love his blog, Whatever, as well. He's been at this blogging thing for longer than just about anybody.

We seem to have the same kid, by the way. Have we talked about this?

love the first shot, almost as if the leaves below are casting their dappled shadows on the clouds above

thus turning the world as we know it upside down :)

fantastic skies you have captured to share...wow!

Ooh I love your skies! How old are the kids you're teaching?

I have been enjoying the cloud cover in the mornings, these are nice shots. I have two huge pecan trees in my yard, I dont think this is a good year for mine either. I get great sunrises on the Rowlett/Garland border on my way to work, right where they are building out the 190 east extention its nice and flat. Of course then I have to juggle, coffee, camera and phone.....oh and driving.

I forgot to add I am running a 10K race in McKinney on Monday.

Jim: if the race is in the historic district, you'll probably run right by my house. I'll be out in the yard trying to deal with what the heat's done to my garden, so I'll be sure to wave.

Nice shots for a phone, OF!
How does that Iphone compare to a dedicated camera for quality?

CP: it doesn't. But it's better than the earlier version, and there are some apps (like Camera+) that can jack up the quality. But I wouldn't trade my Nikon D80 for it. Someone remarked recently that the best camera is the one you have on hand when a good shot presents itself.

You should see my 3rd grades...(shaking head)...oye vei! Honestly, I wonder what this country is becoming!