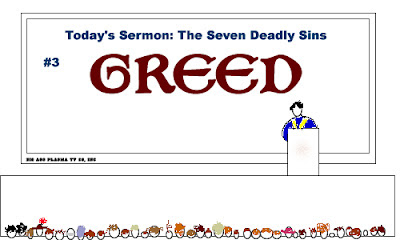 Once again the coalescence of news items has generated a rant—this time on my old favorite, greed. Part of it has to do with seeing on last night’s news broadcasts huge crowds of people racing into malls and big-box electronics stores (“Buy More” as they call “Best Buy” on my favorite new TV show, Chuck) on Thanksgiving day to get a head start on their Christmas shopping. Then, a report on last night’s local news show about the theft of plasma TVs from a downtown Baptist church and this morning’s item about Oral Roberts’s scion, Richard, and his ousting from Dad’s university brought it all together.

Today’s Dallas Morning News clarified the story about the heist in its article “Thanksgiving thieves rob First Baptist of Dallas.” Not only did the crooks get away with eight (count ‘em) plasma TVs, but they tied up three security guards to do it. Now, my first question ran something like this: why the hell did a Baptist church feel it necessary to buy eight plasma TVs worth (according to the News) $5000? And why does a church need to employ three security guards (to whom they were no doubt—or at least I would hope—paying overtime for working on Thanksgiving)? Good grief.

And then, of course, there’s Richard Roberts. According to the New York Times, Roberts has resigned from the presidency of the university founded by his father Oral amid “allegations of a $39,000 shopping tab at one store for Richard Roberts' wife, Lindsay, a $29,411 Bahamas senior trip on the university jet for one of Roberts' daughters, and a stable of horses for the Roberts children.” His activities have apparently been an object of concern for at least twenty years, and who knows what the tipping point might have been (one too many horsies?).

I’m not picking on evangelicals in particular; these activities are simply a manifestation of an overall phenomenon: the modern (American) propensity for overindulgence. But since they’re supposed to be preaching the gospel of the guy who purportedly said that it would be easier for a camel to pass through the eye of a needle than for a rich man to enter the kingdom of heaven . . . well, I’m certainly not the first person to point out the inconsistency.

But greed manifests itself everywhere, not just in the higher echelons of evangelical churches. Way too big houses, Hummers, giant plasma TVs—all the trappings of North Texas middle class life are essentially wasteful, extravagant symbols of the current idea that more is more, and that if my neighbor has it, I need to get it too.

We simply don’t seem to understand the concept of enough. We always think we need a bigger house, a fancier car, trendier clothes. The sheer excess emitting from the advertising sections of the newspaper is enough to spark communists to riot—if there were any left.

Last night, my husband and I watched the Tim Robbins film, The Cradle Will Rock, about the WPA/Federal Theater Project production of the musical of the same name by Marc Blitzstein in 1937. The film was highly entertaining, and rather poignant in places, but its images of the depression-era lines of folk seeking work melted into the background amid the personal stories of Blitzstein and his actors caught up in the politics of the McCarthy inquisition and anti-Red fever. It’s hard to believe that the film was about a moment in U. S. history that occurred only seventy years ago. It doesn’t seem that long ago to me, even though the events in the film happened ten years before I was born.

It also doesn’t seem that far away when I open my electronic copy of the Times and read about the impact of the sub-prime mortgage fiasco in Bob Herbert’s column, “Lost in a Flood of Debt.” Ordinary people, extraordinary events—not exactly the stuff of Greek tragedy, but reminiscent of what preceded the throngs of unemployed people standing in long lines waiting for the remote opportunity to earn a few nickels at odd jobs, or in a theatrical production.

I’ll be lecturing on “art between the wars” this week, and showing Robert Hughes’s film “Streamlines and Breadlines” from his series, American Visions. I’ll have to recommend that students see the Robbins film as well, not only for its amusing portrayal of Diego Rivera and the story of the ill-fated Rockefeller Center mural, but for a sense of the WPA’s importance as a public project focused on the arts and humanities. I doubt if anything of the kind will ever emerge again, because the concept of art as a necessary part of life will have been gobbled up by a focus not on need (art to enrich the soul), but on desire—a wish list of stuff everybody “needs,” like Hummers, huge houses, and plasma TVs in their churches. And whatever you can pick up for cheap if you shop on Thanksgiving day, instead of waiting a whole twenty four hours for the sales frenzy to begin.

Posted by Owlfarmer at 9:24 AM

Greed - Avaritia, one of the Seven Deadly Sins - has in modern times become considered a virtue, so much so that even our religious proselytizers succumb to its siren lure.
I really enjoy your thought-provoking and thoughtful blog, and am pleased to hear you are a teacher of young adults.

Thanks for your comments, gem. Sometimes it's a bit lonely "out here" in blogland. I'm looking forward to seeing/hearing what you come up with on your blog, and your additions to the conversation.