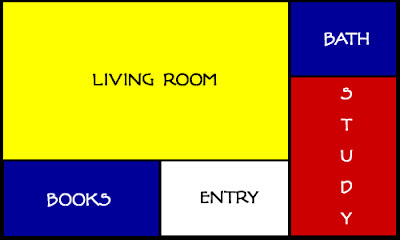 Human beings seem to like grids. While the earliest models for houses might have been caves, followed by huts made of natural materials—neither of which conform to particularly rigid outlines—it doesn’t seem to have taken long for us to start building rectangular dwellings, especially when we started living in increasingly larger groups. The outlines of the houses at Çatalhöyük (one of the first city-like enclaves), for example, are already rectangular pueblo-like spaces that share common walls, a solution to the problem of living on the arid Konya plain, just as the ancestral Puebloans lived in Chaco Canyon, in the dry San Juan basin in New Mexico.

As I perambulated the Accidental Garden and its surroundings the other day, I was struck by the rigid boundaries set up by the original plat-drawings (the half-acre within the grid that became McKinney), reinforced by the fence builders, and then compounded by whomever was responsible for laying down the railroad ties, landscape-timber borders, and the rectangular space enclosed by a sidewalk just outside the back door. The only curves on the property lead to the alley, just in front of the garage, so that folks can drive in from the street, through the porte-cochere (which I realized only the other day means, literally, “car port”—but sounds so much more elegant if a car is a "coach"), and then exit into the alley to make their retreat from the house.

I had more or less acquiesced to this grid, but am now planning to bust it up on the way to completely rethinking the back yard, and eventually messing about with the front. Even my own drawings (like the silly cartoon of the pecans from my last “effort”) tend to place things within tidy rectangles, so that my new food garden design is angular, and the new herb garden will happen within the sidewalk rectangle I’ve designated for the potager. My Child Groom built a patio from salvaged bricks within that same rectangle (which is, itself, contained within the sidewalks). The only non-angular elements of the back yard are the round copper fire pit, and the path the puppies take when they go screaming out the back door to protect us from the marauding dogs and babies that get walked in the alley behind the house (also part of the city’s grid).

What made me start thinking about wreaking anarchy on at least part of the property was an essay by American Bungalow’s editor, John Brinkman. It’s called “Linear Thinking” and makes note of modern man’s desire for control, evident “in the way he categorizes, organizes and measures everything in his grasp, often through the use of straight lines and rectangles” (issue 56, 1). He likens what he has seen of this country from the air to a library globe, with its meridians lined out carefully (more grids) and color coding to delineate one country from another. Nature, of course, doesn’t follow grids, unless they’re designated by cleavage planes in rocks or other physical necessities. And even flat, sedimentary structures can be bent by metamorphic forces over geologic time—and we can see these graceful undulations exposed in numerous road-cuts throughout the country, where human beings have plowed through hills to make straight, geometrically obedient highways.

Brinkman thinks that there’s something innate that makes us appreciate the order that linearity imposes. “Could it be that this appreciation of definitive, confining lines,” he asks, “is the reason we are drawn to the Craftsman style?” He goes on to wonder if it’s something else (its honesty, instead of its rectilinearity), the connection of human hand and human eye—perhaps (and this is me, not Brinkman) the evidence of human creativity expressed in our ability to tame nature, bend it to our will. I’ve never really understood why I love my house’s Craftsman roots (distorted though they are by a 1922 north Texas mentality), but refuse to worship on the altar of authenticity so often reflected in magazines like American Bungalow and Style 1900. It may simply stem from the fact that I’m uncomfortable with human hubris and our desire to impose our will on everything around us. The most obvious reflection of this ambiguity shows up in my increasingly untamed garden.

During the last two weeks I’ve been lecturing in my art and design history classes about the human predilection for grids—such as in the framework for illuminated manuscripts (delimited with pin pricks and thinly drawn lines) and the foundational grid used by the Cubists on which they re-hung body parts after they’d “dissected” them into fundamental volumes, shapes, and lines. Next week I’ll be talking about Piet Mondrian (to whom I apologize profusely for the above illustration; it’s not the first time I’ve run roughshod over that poor man’s ideas) and his quest for the most fundamental, natural expression of art: in horizontal and vertical lines, primary colors, black, white. Mondrian saw nature in these basic elements, but we see it (or at least my students tend to) as the ultimate expression of human power over nature—the obliteration of the natural world into rigid geometry. Yet we live in houses that are every bit as linear as Broadway Boogie Woogie, and not nearly as playful.

A couple of months ago (September/October 2007), Natural Home magazine featured an astonishing house that is the antithesis of most modern houses. Modeled after a chambered nautilus, the house spirals around a central core: the kitchen—with living areas that seem to grow out of its center. It includes a greenhouse and a green roof, hand-cut stone, handmade glass, and virtually no straight lines. It must have been horrifically expensive to build, but surely a joy to live in. [See the gallery of photos; details are available here.]

I have neither the money nor the inclination these days to build a house. I like living in a recycled house, and have enough trouble trying to do what needs to be done in this one—although I am seriously thinking of using clay paint in some of the rooms to soften some of the angles. We’ll have rely on furnishings for our curves—but even those are few (at the moment I can think of a single round table, and the curved handles on the library steps—but little else). Any move away from angularity will have to take place in the garden, where we can take out the railroad ties and timbers, and let the puppies help us decide where to build paths that curve into the expanding wild bits, the tangled masses of wisteria, and the little round bodies of pecans that still litter the entire yard.