Taking Care of the Roots 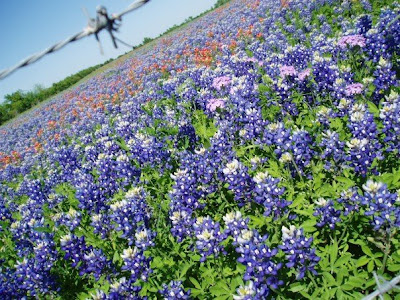 I just read Pico Iyer's short essay in Orion, "The Inner Climate," about global warming, and the necessity to gauge our internal temperature as well as that of the local climate. This was an especially timely happenstance, because the weather's started warming up again and my snarkiness level is going up with the temperature.

Iyer's thesis revolves around the notion that in order for us to effect change in the physical environment, we have to make some changes in the philosophical climate:

Action without reflection is what got us into this mess in the first place, and the only answer is not action, but, first, clearer reflection.

As I look around, at the superficial evidence of change (I can, for example, see my blue recycling trash bin from where I type), there seems to be a great deal of it going on. I could--and may still do--post on what my town is touting in the way of "green living," what with its McKinney Green Building, its model elementary schools, its "green" Walmart, and its snappy new logo ("McKinney--Unique By Nature").

But it's clearly external. I can't imagine for a minute that most of the neighbors who use their blue bins are doing it out of any deep philosophical understanding of what human beings have wrought. Many are using them because their kids are urging them to, or because it's kind of trendy (like buying organic produce--at least until the price makes a dent in the fashion budget). A couple of houses have been ticketed for using their blue bins as extra trash bins (the bigger green ones). Some houses--smaller than ours, with only two or three people living in them--have two green bins they fill up weekly (we used to put ours out twice a month; now it's down to maybe once because we can now recycle most of our waste). The only way they'll really begin to stop buying over-packaged merchandise and throwing all that stuff away is if it starts hurting them in the pocketbook. Capitalism has done this to us: consume more and more to help the economy. But put the packaging in the recycle bin whenever possible.

If the oil companies weren't rolling in their profits, and bitching about new drilling sites (when they're not drilling the places they've already got access to), I'd be happy that gas prices are hovering around $4 per gallon. It's got me to increase my mileage by about 4 mpg (simply by slowing down to 60 and using cruise control whenever possible) and combine necessary shopping with trips to and from work. High gas prices may actually encourage the city of Allen to rethink its participation in the local rapid transit consortium, which would mean that we'd hop on that bandwagon, too (Allen is the next town south, and without its participation, McKinney can't get train service this far north).

But that's just it. As a nation we are reluctant to do anything simply because it's the right thing to do; we've clogged our ears with iPod buds, turned on the TV, the computer, the video game, and tuned out reflection. Thinking makes us uncomfortable, so we don't do it. Until this aspect of our collective experience changes, efforts to do anything substantial to save the planet or to prevent political catastrophe will continue to be cosmetic and, in the end, they won't work.

We need what Tom Kuhn would call a paradigm shift. And maybe, if things get bad enough, the evidence in favor of a philosophical shift--from rampant consumerism to responsible stewardship; from rabid partisanship to true community--might tip us over the edge. We might reconsider our position as Lords of the Earth and begin to see ourselves as just one species, one political entity, among many, but with power that requires vigilant reflection to wield properly.

Photo credit: "Bluebonnets and Fence" by Observer12 on Wikimedia Commons. I loved the juxtaposition of the state flower with the barbed wire--it says a great deal about Texas.
Posted by Owlfarmer at 10:36 AM

Great post, as always, Candace! It is a shame that there is such a superficial commitment to the environment these days, but better superficial commitment than none at all. I would love to see people reflect more deeply on these things, but I wouldn't hold my breath (sorry that I'm a bit skeptical--I think that's what comes of studying history).

You're absolutely right, of course: better some than none. What worries me, however, is that when the trendiness wears off of it becomes too expensive, or interferes too much with established lifeways, it might all be abandoned.

The real hope seems to lie with the children. It's their future we're messing with, after all, and judging from what my own students reflect, I think that issues of sustainability are much more deeply ingrained in them, and therein--as with all things tied to the future--lies hope.

This really doesn't have anything to do with your post, but I have to comment on Pico Iyer. His name keeps on coming up in one of those bizarre synchronicity things. I hadn't even heard of him until my sister-in-law got to photograph him at an event and blogged about it. Maybe I'm supposed to read him...

You are! I'm fond of travel writing in general (which makes it fortunate that I know Lucy), and have read much of what Iyer's written. But he's also beloved by many of my favorite writers, including the late Ellen Meloy. By all means read something--he's published a great deal that shows up online.