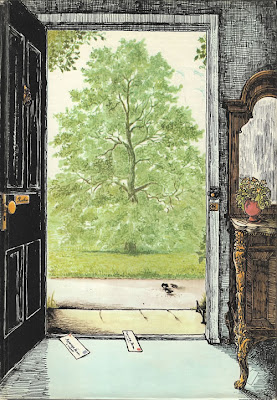 One of the problems with having multiple blogs, even when they're focused on different topics, is that sometimes I'm not sure where to post something. This conundrum arose yesterday when I came across a wonderful book about which I wanted to make note--but couldn't choose the proper venue. This morning I decided to post it on both. This sounds a bit lazy, but since it's the product of a serendipitous occurrence and about the idea of home and place, maybe the idea isn't as silly as it seems even as I write.

The book in question is The Margaret Rudkin Pepperidge Farm Cookbook, illustrated by Erik Blegvad, and published by Atheneum in 1963. I found it in the "nostalgia" section of Half Price Books yesterday, where I'd gone to drown my sorrows after hearing about the resignation of a friend and colleague--the second in as many months--which left me feeling more than a little bereft. Beloved Spouse and I were on our way out when I noticed the rather Edward Gorey-ish spine of a book which, on first glance seemed to be another corporate promotional endeavor (some of which, like the Spice Islands Cookbook, also published in 1963, can be quite good)--but with amusing and well-crafted pictures scattered throughout. The dust jacket was missing, so what attracted me were the un-augmented images on the front (above) and back (below) covers. 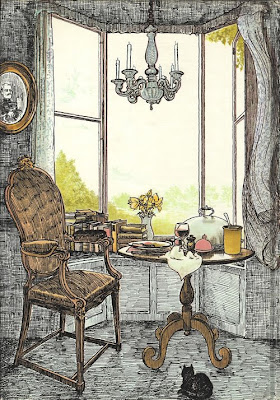 Now, I'm as big a sucker for good illustration as I am for good cookbooks, so I said to myself, "What the hell; it's only ten bucks" and added it to my small pile of goodies.

When I got home, I started leafing through the book and discovered a treasure: a compendium of healthful recipes developed by the woman who had founded Pepperidge Farm (named for her own family's farm in Connecticut) and ended up serving on the board of Campbell Soup after she sold her company to them in 1961. In 2007, Fortune Magazine named her one of the century's fifty most powerful women. (Copies of the cookbook can be had from online used-book outlets like alibris for less than what I paid, but some may be the 1992 edition).

Margaret Fogarty Rudkin was born the same year as my Grandma Clarice, 1897, in New York. In 1937, when her son developed allergies that his doctor said could be addressed by feeding him bread made from whole grains, she began a journey that eventually led to the cookbook. 1963, when Rudkin published it, was the year after I returned from Taiwan and during which I lived with my grandmother, so the coincidence adds to my delight in finding the book when I did.

The illustrator, Erik Blegvad, is actually no stranger to my family. One of my children's favorite books growing up was Judith Viorst's The Tenth Good Thing About Barney (which I highly recommend to families for helping them deal with the death of a pet)--illustrated by none other than Mr. Blegvad.

During my recently aborted attempt to improve my typographic skills (I had to drop the class because midterm madness caught up with me), I had run across another book by Blegvad that's probably worth looking for: Types Best Remembered/Types Best Forgotten, published by Parsimony Press in 1994. But the cheapest edition I could find through alibris is $69. Guess I'll wait on that one.

At any rate, owning Rudkin's cookbook is really like having several books in one, because each chapter focuses on an entirely different topic: Childhood, Country Life, Pepperidge Farm, Cooking from Antique Cookbooks, and Ireland. Each features a chatty and informative introduction, and the "antique cookbooks" chapter offers modern versions of such goodies as a fifteenth-century pumpkin pie, although the original carries this warning: "Cassius, who was bothered by colic and stones, did not eat this. It is difficult to digest and nourishes badly." Rudkin's version is much more palatable (perhaps because she doesn't put in a half pound of sow's belly), and simple to make:

Method: Line a 9-inch pie pan with pastry, making a high edge. Brush the pastry all over with egg white. Place in the refrigerator while preparing the filling. Mix together the pumpkin and the spices. Sift the brown sugar into the pumpkin and mix well. Beat the eggs and add them. The add the milk and cream and mix well. Pull out the shelf of the oven, set the prepared pie pan on the shelf and carefully pour the filling into the crust. Don't pour all onto one spot., but take a cupful at a time and spread the filling around to avoid breaking the crust. Filling the crust this way avoids spilling. 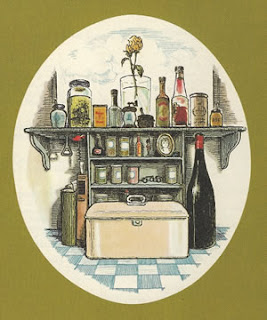 The idea of simple food, lovingly prepared is always welcome, but I think we can especially appreciate it in times when folks no longer eat together all that often, and when grandmothers and their grandchildren can be separated by continents. My memories of times in my grandmother's kitchen come flooding back when I find a book like this, grounded in a similar view of the world and a similar notion of nurturing. My fondest wish is that more people come back to the practice of spending time cooking together as gas gets more expensive and makes folks less likely to run out to the Olive Garden for a family meal. There is absolutely nothing like a home-made pumpkin pie to make us feel secure and comfy--and nothing like a well-illustrated, well-written cookbook to help us recall the relationship between food and home.
Posted by Owlfarmer at 12:46 PM

It's odd that I have also posted on food and an old recipe on my blog, www.suburbanlife.wordpress.com just today, but dealing with plum dumplings made from Italian prune plums as my mother had made so many years ago. Since my grand-daughter was born two years ago, I have made attempts at handing down pleasures from my early experiences. I wish I had some good Hungarian cookbooks for reference, but I do have a book bought in the 70s by George Lang which has traditional recipes and the history of food preparation in Hungary. It is my treasured bible of cooking like my forebears, one which my grand-daughter will treasure when I pass it on to her.
Cooking with Grandma is in our future - one which i look forward to.
Your found book is one I'd treasure also - a great reminder of simple ingredients, lovingly assembled and put through the alchemy of heat = gastronomic pleasure to be shared. G and GEM

I just love the illustrations--what a find! They are definitely very Gorey-ish. I'll have to try the pumpkin recipe!