Perhaps it's simply the season--the lethargy and inertia that emerges in the heat of summer--or maybe it's the specter of change in the work environment that shadows my teaching life these days, but I can't seem to get much done today. To paraphrase (badly) Bob Dylan, I ain't goin' nowhere. 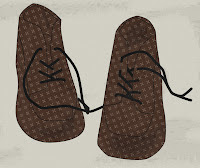 In the first place, it's getting hot. In a house without central air conditioning, temperatures over 100 can be debilitating--even when some of the rooms have window units that keep them cool enough. These days we're only using two rooms--the bedroom and the study. We'd probably leave the bedroom out of the equation, except at night, but we have an old cat (18 years) who doesn't like to come downstairs. The other three feline members of the family occupy open window sills and the grate where an old heating unit used to be housed, but which is now simply open to the space under the house. The attic fans pull cool air up through it, and at least one cat can be found lounging on it all day. The dogs stay in the study where we do most of our work, and which is curtained off with a portière from the rest of the house so they can still run out and bark at the mail carrier and any passing dogs or baby strollers that have the effrontery to use the sidewalk in front. I've jacked the thermostat on the units up to 83, which is quite comfortable, but it's really hard to get any work done in any other part of the house. 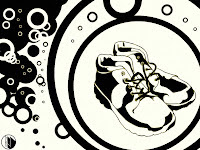 The summer quarter is in full swing, and my students are, so far, engaging and hard-working; but the department in which I teach is bereft of a director at the moment, and the search for a new one entails a certain amount of angst among the affected faculty. Because ours is a proprietary school, run by a corporation interested in its profit margin, we tremble at the notion of being saddled with martinet fixated on assessment and student retention, rather than on the problems of teaching the liberal arts in an institution that tries hard not to be seen as a trade school, but is still ambivalent about the necessity of what we do. While all this is going on, I'm spending most of my non-teaching time revising lectures to make them more visually exciting in order to combat student prejudices against history courses. The past just isn't immediately relevant to these guys, so I have to show them how cool it all really is--in 100 images or fewer per week.

But even the rather pleasurable task of finding some new images for my upcoming Vienna Secession/Art Nouveau lecture hasn't been enough to stave off entropy, and I was busy procrastinating this morning (by playing with my new printer/scanner, reading today's New York Times online, and sorting through my image library). In the Times I ran into a review of Ammon Shea's new book, Reading the OED--about reading through the entire Oxford English Dictionary. Since noodling through my compact edition of the OED is one of my favorite ways to ploiter ("work to little purpose"--a word mentioned in Nicholson Baker's article), I enjoyed both reading the review and checking out Shea's minimalist web page. 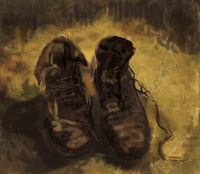 Later, while revisiting my image library (which is, as it turns out, enormous--about 5000 strong), I ran across the results of a workshop my students used to do at midterm. Before, that is, the assessment regime caught up with me and I had to start administering exams to gauge their progress on course objectives. At any rate, the assigned task involved setting up a still life patterned after an impressionist or post-impressionist painting, taking a digital photograph of the results, and then manipulating the photo back into an image in the style of a nineteenth-century art movement. It was always fun, and the results were often brilliant; and now I'm thinking of making it a segment of the exam. 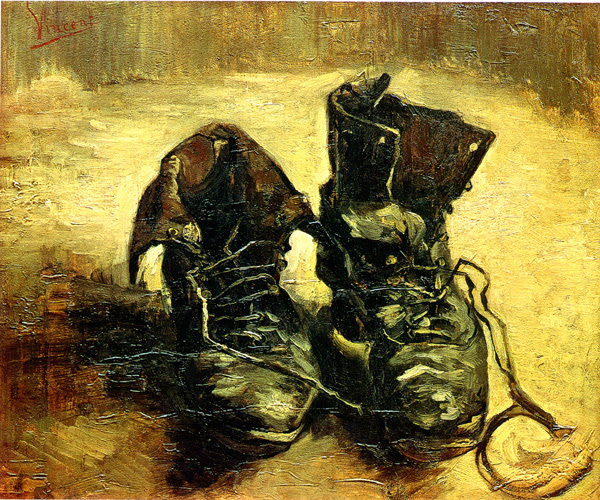 The still-lifes were usually patterned on works by Paul Cézanne or Vincent van Gogh, and usually involved plates of fruit, pitchers or glasses, and table cloths. But at one point I brought in my hiking boots and a copy of van Gogh's painting of his shoes--made philosophically notorious by Martin Heidegger's essay, The Origin of the Work of Art. I've used some of the results to illustrate this post--and included Wikipedia's image of the painting here for comparison. 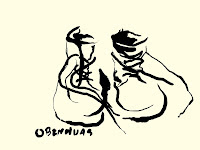 Just this week I have been newly amazed with the creativity our students muster, especially in light of tight deadlines, heavy work-loads, and an accelerated program. While sitting in on a colleague's course in Conceptual Typography, I have spent the last three weeks (four hours per week) trying to keep up with these kids, and not doing a very good job of it. The software is difficult for an old fart (Adobe Illustrator and In Design, neither of which I had even opened before the course began), the assignments are challenging (although rather fun), and the students' solutions are always far more creative and energetic than mine are. Still, I can see how what I'm trying to teach them can help them to ground their creativity and perhaps make some new connections.

So now, having completed my ploitering for the day, I'm inspired to get back to work on the lecture. At least until the sun hits the west windows and I'm forced to close the shades and retire from the heat with a cold beer in front of the A/C.

Image credits: Midterm workshop in History of Art and Design II, Summer 2006: Amy Saunders, Brent Hollon, Lucy Miron, [Vincent van Gogh], and Tiffany Obenhaus. Click on the images for larger views that show them off quite a bit better than the thumbnails do.
Posted by Owlfarmer at 1:30 PM

Owl - I like the word 'ploiter'; its rich with possible uses. Also like the variations on the shoes you have illustrated here. We have had what I consider 'real' summer during the past two weeks, although certainly not over 100 degrees, and actually quite cold and rainy for a couple of days. It must be really hard to discipline yourself to working during such heat, but then you're probably an old, self-disciplined hand. G and GEM

Mmmmm. rain. I, too, love the shoes. It was hard picking the best ones. I'll have to find another use for the rest. Or maybe I'll just do a shoe collection over on the Cabinet.

You may not think you leave much of an impression on any of us, but you do on me. I've been an semi-amateur genealogist (to the point of obsession)for eleven years now & studied some interesting places & times in history just to get a bigger perspective on my ancestors & each week in class is like visiting old friends. I've always had more of a "look back" attitude than others my age & I really don't care much that I get strange looks & don't fit in much with others my age & younger. My father's favorite saying has always been that those who don't know their history are doomed to repeat it. (You can guess how often I heard that growing up!) Which a lot of the time, seems pretty accurate to me while watching things happening on the world stage. You may be amazed at our creativity & many times I am too. It always seems no matter how well I do on something, someone else has an equally great or sometimes better take on things. A lot of times I guess my creativity isn't all that inspired as it sometimes takes more than a week for me to come up with a great idea. But, even as I moan & groan at the amount of (you want me/I have to do what?) homework that gets handed down to me, I also appreciate how some of our teachers come up with their lessons and their passion for what they are trying to teach. It's our job as students to try to listen & learn so after we graduate & go off to the "real" world, we'll hopefully understand what the client means when they come up with saying they want something more "artsy" or whatever other ambiguous word they come up with as a way of driving us to the point of insanity in trying to meet their design problems. By the way, the shoes were great. Loved seeing the different ways of taking the same image & turning them into something different.

Thanks for this--more than I can say. It's been a rough week (pre-midterms mostly, but some eyes seem more vacant than usual, too), and it's nice to know that some of you folks are actually getting something from this endeavor.

Thanks also for taking the time to read the blog. Often it's the students who come up with interesting observations that we don't expect, but welcome.

I did my undergraduate dissertation on Heidegger, Art & Death - many decades ago. The image that sticks in my mind is a Van Gogh Boots - but next to or on a chair. I have never been able to track down this painting since, and wonder if I've conflated the famous chairs with the famous boots. Just one of those long term niggles. If anyone out there knows something.......