The Princess and the Valley

There's something about being from someplace distinctive but also a bit obscure that makes a person sit up and take notice when that place gets mentioned in the news, or shows up in a film, or provides background for a literary work.

This is exactly what happened to me when I first read Frank Norris's novel, McTeague, in a graduate course on literary naturalism. I eventually wrote my master's thesis on the topic, intrigued as I was by the really bad use of science in some of these novels. McTeague, in fact, was grounded in a notion of "degeneration," popular in the late nineteenth century as an explanation for the human propensity for beastliness toward one another. The idea had penetrated politics so thoroughly by the second world war that the Nazis used it to justify all manner of their own beastliness toward their fellow human beings.

All that aside, however, a passage in Norris's novel brought me up short when I read it some twenty five years ago, and I remember being puzzled by it: 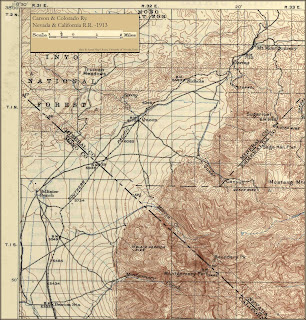 Near a place called Queen's the train reentered California, and McTeague observed with relief that the line of track which had hitherto held westward curved sharply to the south again . . . . At length the mountains began again, rising up on either side of the track; vast, naked hills of white sand and red rock, spotted with blue shadows. Here and there a patch of green was spread like a gay table-cloth over the sand. All at once Mount Whitney leaped over the horizon. Independence was reached and passed; the freight, nearly emptied now, and much shortened, rolled along the shores of Owen Lake. At a place called Keeler it stopped definitely. It was the terminus of the road.

Now, anyone who's ever driven south from Laws or from Bishop in the Owens Valley knows that because Mt. Whitney is on a bee-line west of Lone Pine, the mountain itself doesn't become visible until just before you get into town--not before Independence, which is a good fifteen miles north (not to mention the fact that there's no real horizon). I wondered about this when I read the book, and even made a couple of marginal notes: "Independence comes before Whitney" and "Maybe it looks different from the train--on the eastern side of the valley." I kept meaning to check this out, and even asked my grandmother about it once, but by the time I was in a position to check it out, I'd forgotten about the passage. 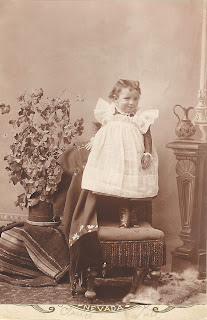 Recently, however, my Uncle Art, the family patriarch, sent me some articles that my father and grandmother had written for the California quarterly, The Album (devoted to Inyo and Mono County history) back in the '90s. In one story, "Riding the Slim Princess" (October 1991), my grandmother describes her family's trip from Nevada to California in 1901 on the narrow gauge railway that crossed the mountains. It made me go back to the book for the passage, and realize that Norris wasn't very good at details like this anyway (he also mistakes "Queen's" for the depot at Queen). My grandmother's description was not only more precise, but also a great deal more pleasant to read. Her view of humanity was considerably more generous than Frank Norris's.

I've brought Norris up before in an earlier post on my great grandfather's stagecoach enterprise, but my grandmother's account provided some new information--such why they had decided to leave the isolated Big Smoky Valley for more "civilized" digs. Other family members had already settled in Big Pine, and my great grandmother wanted to make sure her children were properly educated. Despite having to leave her puppy behind, "Baby Clara" evidently thought that one good thing about the move would be that they wouldn't have to travel miles in a buggy just to see friends.

The family embarked at Sodaville (now mostly a ghost town) and followed a route which now roughly coincides with Nevada Highway 360 (feeding into US Highway 6 into California). They got off the train for good (except for a return to Nevada for a couple of years when my grandmother was still quite young) at Alvord station, the name of which was later changed to Zurich. Traces of these old depots (such as Kearsarge and Aberdeen) can still be seen along the route further south (the line ended in Keeler, on Owens Lake--not "Owen Lake" as Norris called it). Beloved Spouse and I spent an afternoon along the old railway bed the last time we were in the Valley, and got this picture of the terrain below the Reward mine: 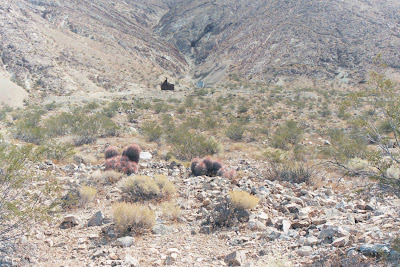 I even came home with an old square nail that had been used to secure the track to the ties.

Little did my grandmother know when she made that exciting trip to her new home that she'd end up having children, grand children, and great grandchildren who developed a deep and abiding love for the place. Every time I think about getting out of town, as I did recently in another post, the first place I think of is the Valley. When I decided to write a utopian novel based on William Morris's, the only location I considered was the Valley. And now when far-flung family members get together for funerals and Labor Day celebrations, we convene at one of the old family homes in Big Pine. I miss being there this year, but long to make it out soon. I only wish I could take the train.

Photos: A photo attributed to Fred Hurst on the Owens Valley History pages; a map of part of the Carson and Colorado railroad route out of Nevada; my grandmother, "Baby Clara," about two years before she made the trip to California; barrel cactus on the Manzanar-Reward road, alongside the C&C rail bed.
Posted by Owlfarmer at 3:44 PM

What a fascinating story. Now I know why you chose this place as the setting for your book! It seems like a very lonely place, but beautiful.