The news these past couple of weeks has been dreary. I find myself reading the financial pages of the local rag, rather than simply sticking to regional and national news, just to find out what business people are writing about. But the situation's irony hasn't escaped me. The economy itself is accomplishing what all the philosophical prattle of folks like me--pleading for us to mend out ways, spend less, live more lightly on our planet, and stop buying stuff we don't need--has failed to bring about in recent years. The financial world, all in a tizzy because the ground beneath their collective feet is giving way after years of illogical, unethical, and, yes, stupid practices, is now scrambling for ways to keep it out of the grave it's dug for itself.

Financial whiz kid Paul Kedrosky was predicting a new wave of frugality back in September (Frugality is the New Black), and although that seems years ago now, at this point he sounds like a prophet.

The papers and blogs are full of laments about what a lean Christmas everyone will have, being "forced to cut back" on such lifestyle givens as eating out and "going shopping whenever I feel like it." I hear women around here exclaim, in true dismay, that they can't afford to buy that cute little number at Chico's after all. How they fit all that stuff into their closets in the first place is beyond me, but these ladies are truly (to them) hurting. Their way of life, fostered by our collectively greedy culture, is in real danger.

I've posted before (in "Muddling Toward Frugality" back in January) about the "simple living" people (whose bible is RealSimple magazine; it's not really about an Amish-like simplicity; it's about "making life easier") and their buy-more-stuff-to-organize-your-stuff mentality, and it's going to be interesting to see how even good companies like Container Store (with its well-treated workforce and cushy benefits) will fare if the downturn continues for any length of time. Because one of the first things to be crossed off the shopping list is the fancy cedar hanger or the dress bag to hold the new outfit you didn't buy after all.

Of course, even though we are starting to pay down debt and save a bit of cash, all of this not-buying has to have some kind of negative effect on a greed-based, advertising-fed economy. If consumers don't buy more and more, and indeed end up buying less and less, surely that's going to send more retailers belly up. If people hang on to their old cars, rather than buying new ones, or choose to "buy down" (smaller, less expensive, more fuel-efficient models), surely the auto makers are going to have to scale down as well. Merger talks are under way as I type between General Motors and Chrysler, with the help of the Cerberus Capital Management group (still guarding the gates of hell?), and that can't be good news for workers.

I wonder if it occurs to them that building better (rather than bigger, fancier) cars--those meant to last, protect the safety of their passengers, and cost less to run--might be a way of rebuilding the industry. Imagine a company that invests in offering high-quality (rather than over-priced) maintenance services, builds cars in a carbon-neutral factory, and spends far less money on advertising (letting the cars advertise themselves) so that it can provide good wages and benefits without the union's having to strike for them? What if consumers weren't urged to buy a new car every few years, but rather to invest in maintaining the ones they already owned? What if a car were an instrument of transportation rather than a status symbol? 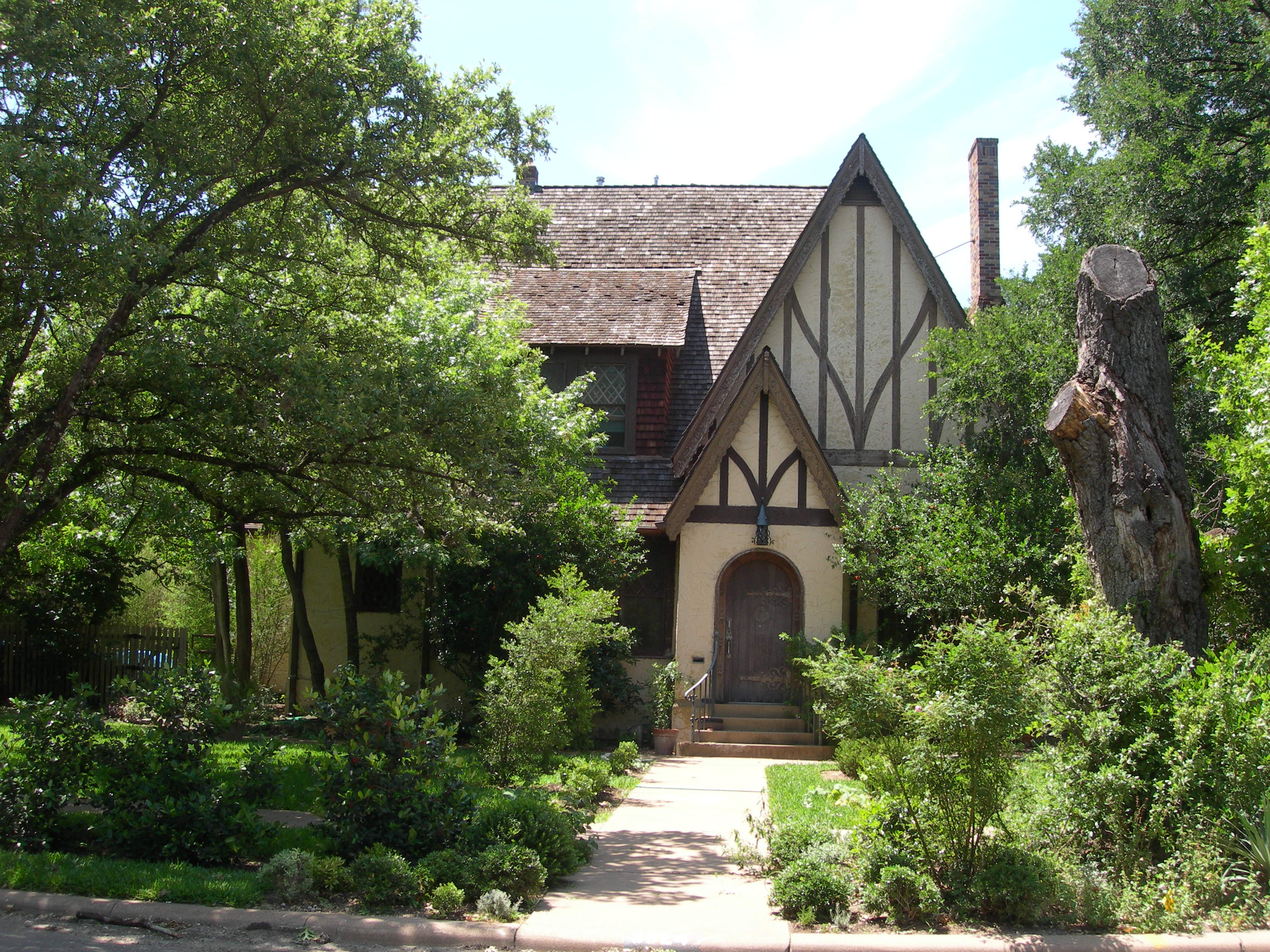 In this weekend's News, a feature article in the style section touted the "new old house" concept being developed around the area, with one such development right here in McKinney. The idea that ahistorical facades with two-storey entryways (not really porches) and cutesy turrets on every other house may not appeal to sensible people is finally making its way onto local builders' radar. But houses that reflect more the styles built around the turn of the nineteenth century, like this Tudor revival cottage in Austin, are gaining in popularity. The newer versions aren't a whole lot smaller than typical McMansions, but they're based on what passes for vernacular architecture in north Texas: prairie style foursquares and bungalows, and revival styles with a bit of Victorian whimsy, some exterior charm, and real front porches for visitin' with neighbors. They're still pretty pricey and feature more square footage than anyone really needs, so I'm waiting for Sarah Susanka's "not-so-big house" to catch on here, and I'm not holding my breath. If the economy stays on the skids for a bit longer, though, perhaps smaller houses will catch on. What they're going to do with all the characterless monster houses already built, I don't know. Maybe cities can tear them down and use the bricks to build sidewalks so people will be encouraged to drive less.

I doubt that the current situation will do all that much to rob us of our greed and nudge us too far toward sustainability. But I will be keeping an eye on the market, not just to see how much farther in value my measly retirement fund has fallen, but to see if we really retain anything from these hard lessons.

Pop quiz in the morning. The final exam will be cumulative.

Photo credits: Image from Wikimedia Commons.
Posted by Owlfarmer at 7:57 AM

The trend toward smaller homes is one good result of the U.S. mortgage industry debacle and overall economic crisis. And with the "new old house" movement gaining momentum, there will be a natural merging of both trends along with one more -- sustainability -- to drive market demand for smaller, greener, traditionally-styled homes. Yes, even in Texas! (But maybe not tomorrow...)

Thanks for the input. The smaller house trend seems to be taking hold in older, established neighborhoods in Dallas (where up until recently there had been an absolute glut of inappropriately huge houses built on really small, .17 acre, lots and over-shadowing their much smaller neighbors. The irony here is that those houses end up destroying the character of the neighborhoods that attract people in the first place.

The 'burbs are another story. Tucker Hill is one of the rare instances in the fast-growing outer reaches of the Dallas area, because the houses do have some character. But they're still really big, and that's what folks seem to want (at least until they can't afford them any more). In the historic district where I live there are a real variety of sizes--but few over 3500 square feet total. On the other side of town, they're still building 5000 square foot monstrosities.

But I do hope you're right about the trend overall!

Thanks for coming by the other day!

I was in one of those 5000+ sqft houses this weekend for a party and I have to admit that the thought of having all that space made me positively giddy. That is of course until I thought about what the electric bill would be in the summer. ugh.

I love what you've written here, but man I really think it's tough. The reality of our financial situation hit me for the first time today (denial is a remarkable thing) and I think that the hardest part of it is realizing that we're not going to be able to afford the extras, possibly not for a very long time. It's not like we live extravagantly (hardly!) but it's nice to have a dinner out now and then or to have ice cream in the freezer or to be able to drive my oldest to swim team practice that she loves so much and is thriving on five (yes FIVE) times a week. It's hard to shift back to a mentality that these things are luxuries, not to be taken for granted. I want my nightly ice cream, damn it! Of course I realize the blessings that will come from living more frugally, but frankly I want to be on the other side of the lessons already. I don't want to have to actually go through them! Let me have the gifts of having learned to live with less AND be flush with cash. : )