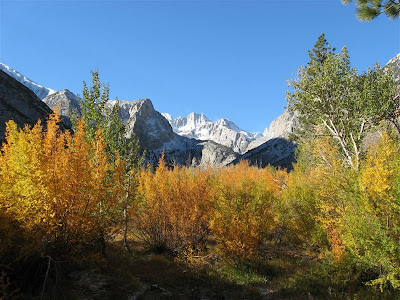 Now that the throes of finals grading are behind me (at least for another eleven weeks), I've had a little time to reflect on seasonal changes--something I like to do around equinoxes and solstices, but had to postpone because of the usual end-of-quarter mishegoss. This time of year usually finds me fraught with homesickness, and so I've used a wonderful autumn photo of the Sierras near my Dad's home town to open this post. 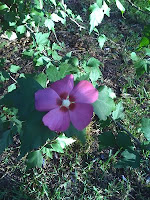 In my continuing effort to mark the seasons in this place, and to develop some enduring level of affection for the suburbanized prairie, I wandered my increasingly disheveled property this morning. The equinox occurred late last month, with little fanfare. No "weather" (which, in North Texas, means that it's been pleasant--dry, cool, relatively ozone-free), no catastrophes since Ike. It was actually Gustav who turned the season around for us, and brought us out of summer. We got little from Ike, but it kept things cool. At any rate, it's now fall, the flowers are fading, and the seasonal turn needs marking.

This is the time of year, too, that always brings poetry to mind--especially poetry of place. And since my daughter is well into her "thirtieth year to heaven" (she turns 30 next June), I thought of Poem in October by Dylan Thomas, whose unfailing ability to evoke his physical environment also came to mind as I strolled around in the back yard. Our landscapes have little in common, but there are moments at which our worlds touch briefly and then carom away from one another:

A springful of larks in a rolling
Cloud and the roadside bushes brimming with whistling
Blackbirds and the sun of October
Summery
On the hill’s shoulder,
Here were fond climates and sweet singers suddenly
Come in the morning where I wandered and listened
To the rain wringing
Wind blow cold
In the wood faraway under me.


Pale rain over the dwindling harbour
And over the sea wet church the size of a snail
With its horns through mist and the castle
Brown as owls
But all the gardens
Of spring and summer were blooming in the tall tales
Beyond the border and under the lark full cloud.
There could I marvel
My birthday
Away but the weather turned around. 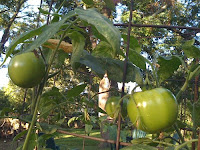 No hills here, and the day is already fair, and if the weather turns around it'll bring welcome rain, but there are blackbirds (a cacophony of them this morning: grackles, cowbirds, starlings, and even--for reasons I don't understand at all--a redwing). Fading summer is palpable in the garden, where the tomato vines have fruited again and there will be a few peppers, but the plants themselves are wan and scraggly. I've had to water twice this week to keep them from giving up the ghost. The barred owls have made themselves known again, but in the distance now--not like spring, when they're making porn movies in the trees outside my windows.

Leaves are beginning to drift down on the little patio Beloved Spouse recently constructed between the study window and the potting shed. I've moved a couple of chairs there, and our ice chest, and might get a pot or two of seasonal posies to brighten it up. Eventually it'll have alyssum growing around it, and I'll add a cafe table, and maybe even an arbor to cover it. With grapes, perhaps. Some day.

During October, Beloved Spouse and I also celebrate his birthday, and the anniversary of Sputnik (both events took place in October, 1957). I remember my father's saying to me after the launch was announced, "Some day those things will be all over the sky." Sure enough, by the time I was a teenager, my grandmother and I would sit outside her house on a clear night and watch satellites go by--sometimes two or three on an evening. Of course, here, only thirty miles north of Dallas (the route to which is lined with suburbs) with the usual combination of city lights and haze, it's hard enough to see stars, let alone satellites.

Add to all of this the coming of the Jewish New Year, and a sense of renewal, newness, beginnings and starting over. The Worm Ouroboros that swallows its own tail; the end of one thing and the beginning of another. Many Jews celebrate Rosh Hashanna and Yom Kippur the way Gentiles celebrate December 31, only with more ritual and seriousness. But this is a harvest festival, and the celebration of first fruits as much as a renewal. We make account of our errors and strive for betterment, and we enjoy the harvest of pears (and, in alternate years, pecans).

I went out on my own front porch in the middle of September to see the Harvest moon rising hugely, but my favorite full moon happens this month: the Hunter's moon, when the trees have lost a lot of their leaves already, and it's easier to see rising. One of the projects I have on the back burner is to photograph the full moon each month for a year. I meant to start with the Harvest moon, but end-of-quarter distractions made me forget, so it'll have to wait until the fourteenth, when I'll probably think of Dylan Thomas again, and remember other bits of the poem, and relish the season, and mark the moment:

And there could I marvel my birthday
Away but the weather turned around. And the true
Joy of the long dead child sang burning
In the sun.
It was my thirtieth
Year to heaven stood there then in the summer noon
Though the town below lay leaved with October blood.
O may my heart’s truth
Still be sung
On this high hill in a year’s turning.
But now I've got to go work on pear conserve, and sweep the squirrel-borne detritus (half-munched bits of immature pecans everywhere) off the driveway so I can stop tracking pecan shells and guts into the house every time I come back inside. And then it's back to work on prep for the fall quarter: a new batch of students (180 or so of them), and a course I haven't taught in a year (Visual Anthropology) to keep things interesting.

Photo credits: A lovely shot of Norman Clyde Peak's northeast face in autumn, seen from Big Pine Creek, by Justin Johnsen via Wikimedia Commons. The last Rose of Sharon in my garden, and the last few tomatoes, still green.
Posted by Owlfarmer at 7:56 AM